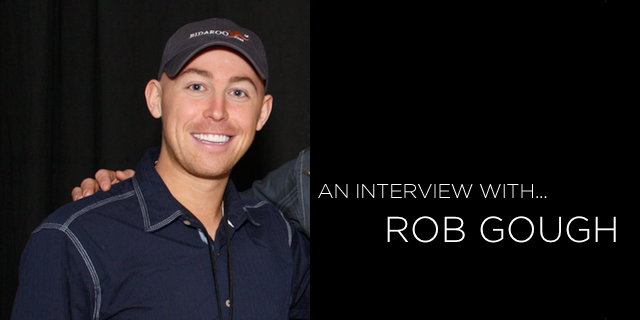 At age 18, Rob Gough was diagnosed with a rare bone cancer. He was just finishing his freshman year in college, but he would have to put his studies on hold and spend the next year and a half going through chemotherapy.

Those 17 long months were spent in and out of the hospital. He would do five days of chemotherapy, after which his immune system was completely devastated. He would spend two weeks recovering, avoiding raw fruits and vegetables because they might contain mold spores. If someone hit him, he risked bleeding to death internally. Then the chemo would start again. And over and over.

By the end, he was exhausted and his body needed longer breaks to recover. But when he was awake, he spent some of his time in the hospital dreaming up startup ideas.

Ten years later, Gough has much more energy – he can work 16-hour days on that startup he dreamed up. And he feels appreciative.

“I love what I do. It just makes me feel blessed to be here,” he says. “I was always positive and always believed that I could do anything, but I think going through cancer reinforced that feeling.”

Gough first learned that anything is possible from his mother, who once asked him whom he looked up to. When he hesitantly said Michael Jordan, his mom replied, “Well, who does he look up to?” Gough didn’t know. “The owner of the team,” she said. “That’s who you want to be.”

As a kid, Gough had already started dreaming big – or at least bigger than some of his peers. He opened a lemonade stand, sold candy on the bus, and mowed lawns. When he visited his grandparents in Florida, he would collect sand dollars and bring them home to Indiana to sell. He recalls being excited for his sixteenth birthday not because he could drive a car, but because he could own a company.

These days, Gough is putting his efforts into Eckim, a coupon company that owns DefinitiveDeals.com and CouponChad.com. He cofounded it in January 2012, and it drove over $100 million in retail sales for its merchant partners last year. The team has since grown to 15 – with no funding – and he hopes to prove that a bootstrapped company can sell for $100 million.

Oh, and while he’s at it, he might also buy a basketball team – “just to prove that it can be done.”