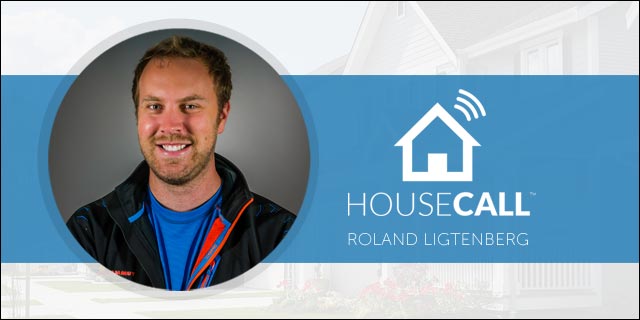 HouseCall has been dominant in the San Diego startup ecosystem recently. Over the past few months we’ve seen them amass $3 million in total funding, they won our San Diego Mixer & Startup Showcase, and they also won the Pitch Tech competition.

Further, they took their $5,000 winnings from Pitch Tech and reinvested it into San Diego, so to speak. The HouseCall team set up a fund to subsidize $1.00 window and power washes for victims and evacuees of the devastating fires.

Roland Ligtenberg, co-founder of HouseCall, told me all of this and more during our face to face interview: check it out.

Tech Cocktail: Where did the initial idea for HouseCall come from?

Roland Ligtenberg: Five of the founding team members at HouseCall – myself, Ian Heidt, Adam Perry-Pelletier, Reza Olfat, and Chris Zwickilton – worked together at Qualcomm Labs. We had initially designed a product Gimbal, a contextual location technology that monitors sensors in smartphones.

It was successful, and we saw a lot of people building contextual apps using Gimbal. Seeing the way others were using new location technology to solve real world problems through an app was inspiring. After leaving, we decided we would solve our own problem of finding local trusted home service professionals and completing the daunting ever growing ‘honey-do list’ by building our own app. There’s a lot of ‘secret sauce’ tech involved in the mix, and ultimately led us to start HouseCall.

Tech Cocktail: What are the driving philosophies at HouseCall?

Ligtenberg: One of our major philosophies is trust through transparency. All of the professionals that use the platform are background and reference checked as well as shop tested before they’re able to use it in the field. We also operate on the idea that giving business back to local service providers, who are really your neighbors and community members, is in everybody’s best interest.

In a lot of cases the professionals found in the HouseCall app generate more than 50 percent of their income through it. In fact, some of the maids that use HouseCall are 100 percent full time on the platform; they make great money. But more importantly we work hard to make them happy, and they are. That means they do a great job, which in turn, makes the homeowners happy.

Tech Cocktail: How do you market HouseCall against competitors?

Ligtenberg: First off you have to understand that there really isn’t any competition that does what we do. Most competition we encounter is hedging a bet on 1 vertical, like maid services. These companies might have a pretty front end, but at the end of the day they lack the transparency and Amazon-like marketplace feel we offer our users.

Here at HouseCall we like to hedge our bets on as many different service verticals, which is better for the industry at large. If we can create a better marketplace it will lead to three things: better pricing, reviews from legitimate users, smoother workflow, all of which add transparency that breeds trust.

When it comes to bringing in new users the majority of our efforts are around generating word of mouth; we tell people our platform is almost like Amazon meets Uber for local markets. We take licensed professionals, mix in their information, and then wrap it all in the HouseCall $1,000 guarantee (although we’ve never had any users need the guarantee).

Tech Cocktail: Why did you decide to operate your HQ out of San Diego?

Ligtenberg: We have people on our team with houses and families here in San Diego. Pair that with our desire to see the San Diego startup ecosystem grow as much as possible and that’s reason one. Aside from that, our experiences and networks we developed locally are extremely useful and we want to continue to take advantage of them.

Our first $1.5 million in funding from e.ventures was a broad stroke because they understood us and our mission. Our next strategic round (from Canter Capital) that brought in an additional $1.5 million was more locally focused because we want to maintain our core team in San Diego.

It’s also worth noting that an ecosystem like San Diego shouldn’t ever be compared to Silicon Valley. We’re our own environment with our own set of rules.

Tech Cocktail: What does the future look like for HouseCall?

Ligtenberg: This summer is going to be big for us. In effect we already have 2 apps for iOS: the consumer facing app and the professional facing app. We’re going to push out an Android version this summer for both. We’re placing all of our bets solely on mobile and that will lead to a seamless transition into new cities this year – so stay tuned!