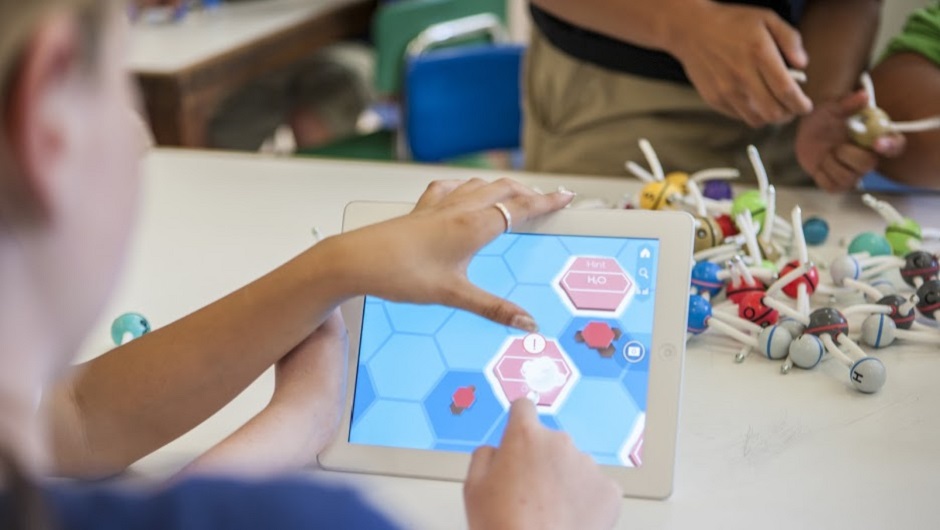 One of my favorite childhood book series was about a couple of boys with a magical chemistry set. The main characters of Scott Corbett's Trick series were constantly creating wacky potions that grew hair or made people weirdly well-behaved. One childhood memory I really don't have at all? Chemistry class. I definitely know I took one in high school, but I seriously can't remember anything except that one experiment where I played around with dry ice.

I know I'm not alone on that last point—people complain about the confusingly arbitrary and abstract symbols in chemistry almost as much as they do about the same problem in math class—but I was surprised to see someone who also loved those kid's books: Jessie Schell, founder and CEO of game development company Schell Games. Spurred by those early memories, he's using the same wonder and adventure that book series gave him to help solve that huge problem everyone has with chemistry class: it's so boring.

Happy Atoms, a game that combines physical toys with a iPad app, launched its IndieGoGo campaign today. Schell Games is partnered with educational toy Thames and Kosmos: the latter handled the app side, while the former developed the chunky plastic “atoms” that kids can join together into representations of molecules that they can hold in their hands. The goal is to make the atoms stable, or “happy,” by connecting them to other atoms until no available electrons are left.

And unlike plenty of crowdfunding campaigns, these game designers have worked prototypes already in existence. Test runs have proven hits at classrooms and at the National Science Teachers Association conference.

“We're running the campaign because we want feedback and people to get excited about it,” Thames and Kosmos president Ted McQuire said during our interview.

Happy Atoms doesn't rely on actual chemicals. As fun as a baking soda and vinegar volcanoes are—and yes, Thames and Kosmos has an entertaining Mars volcano—anyone trying to actually learn chemistry faces a barrage of information about the microscopic universal building blocks called atoms. Volcanoes don't explain microscopic chemistry. By creating fist-sized versions of atoms, the developers have hit on a great way to make the structures of molecules into an intuitive game. “It's to model what you can't see,” McGuire explains. 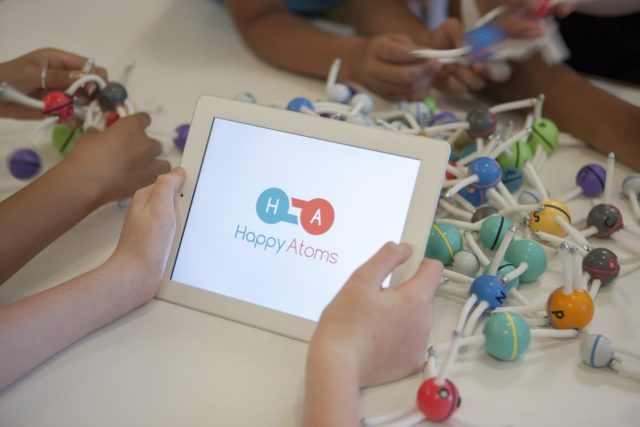 These games need rules, but the basic rules guiding atoms are already in place. As any boring chemistry book can tell you, atoms naturally want to be stable—when their outer shells are full of electrons. For Happy Atoms, that means that each atom comes with short, rubbery magnet-tipped arms to represent electrons. They'll click into place on other atoms, and kids can scan the resulting creation, allowing the app's image-recognition technology to tell them what their new molecule is, and where it lands on a “molecule map” that the app uses to track every molecule that's been added.

The designs are fun: each atom has a different vibrant color, and the rubbery arms lock into other atoms so satisfyingly that McGuire can't help but fiddle with one of the five arms on the bright yellow Sulfur atom he uses to demonstrate the process.

Since the prototype's already out, they're faced and beaten plenty of the challenges involved: The type of rubbery substance used for the electron arms was once silicon, but TPR material proved more feasible. The shape of the electron arms took a while to figure out, but a cone-like nub was found to be both stable and easily rotated. The most interesting response to a challenge was the realization that each atom needed to have every embedded magnet placed in with a certain polarity pointing inwards, to ensure that the atom's magnets didn't collapse inwards.

Happy Atoms also manages to avoid a personal pet peeve I have with educational games. It promotes independent play by letting kids figure out new combinations of atoms by themselves, rather than holding their hands through the entire learning process.

The main set features 52 pieces and an app that can identify 120+ programmed molecules. Once constructed and scanned, each molecule will reveal extra facts, including its “composition, systematic name, geometry, hazards, bond types, state of matter, and how it exists in the real world.” While the IndieGoGo campaign is up already, the sets themselves should hit shelves by November of this year.

You can't find those kid's books in print today. As Schell speculates, perhaps “the idea of a boy who lives by the motto ‘A dedicated scientist never hesitates to experiment on himself,' and mixes and drinks unlabeled chemicals given to him by a stranger might not seem completely safe to today’s parents.” But there's no better (or safer!) way to learn about the building blocks of chemistry than to get a Happy Atoms set so that you can turn atoms into literal building blocks.