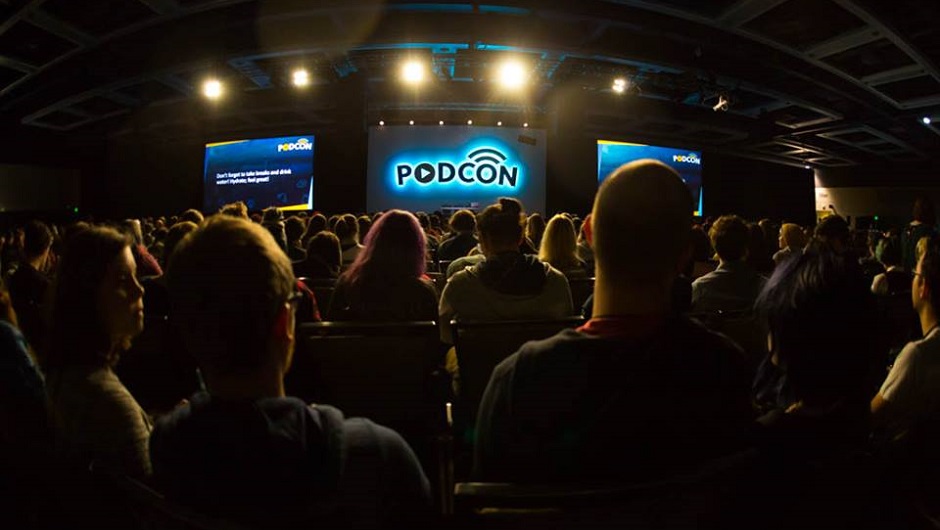 This past Saturday, thousands of fans, cosplayers, and laptop-toting creative professionals poured into Seattle's Washington State Convention Center, coming together to celebrate one artistic medium for the first time. The first annual PodCon, a celebration of the podcasting community, successfully debuted over the weekend, and it hails a bright future for the rapidly growing medium.

A small number of huge personalities anchored the event: The three aggressively good-natured McElroy brothers, Justin, Travis, and Griffin, together with the equally cheerful YouTube stars John and Hank Green, set the tone early. During the opening show, Hank joked about a few seconds of segment-closing music playing too early, saying “and then we messed it up” by continuing to talk. This welcoming, joke-heavy approach extended across the weekend, though the event ran so smoothly that I have no doubt the hosts' loose style was countered by the expertise of the staffers, whose track record includes VidCon, a similar but higher profile event for the YouTube community.

“This is definitely the smallest con I've been to,” said one attendee cosplaying as Johan, a bard from DnD podcast The Adventure Zone.

The Expo Hall in particular might seem sparse to those used to the Emerald City Comic Con, a far larger event that uses the same building. But podcasting itself is an important medium, not just because its relative youth allows creatives to experiment wildly, but because it democratizes the internet in a way that, thanks to eroding net neutrality regulations, is increasingly rare.

“I think it is one of the best places we as a society can tackle tough topics,” said Rod Morrow, one half of The Black Guy Who Tips, citing the intimacy of the podcast community. Karen Morrow, the other half of the podcast, had a related point to make, adding, “I think there are a lot of things we're all taught about society that are wrong. And for the first time, minorities have voices that they have never had before.”

Why does representation matter? Because a new generation of podcasters could be listening and in need of encouragement. While podcasting is still new, creators are already helping one another grow, even if simply by existing. Franchesca Ramsey started the podcast Last Name Basis with her husband, she said at one panel, after listening to another married couple podcast, the Dawn and Drew show. At another panel on fiction podcasts, multiple creators cited other podcasts as their inspiration: The Bright Sessions‘ Lauren Shippen was spurred to try out the medium by Welcome to Night Vale, while The Black Tapes went from a screenplay treatment to a podcast partially due to the success of Serial.

“Serial fundamentally changed podcasting,” said Joseph Fink, co-creator of Welcome to Night Vale and co-founder of the PodCon itself, in another panel.

The concept of a podcast broke into public consciousness after Serial's 12-episode true-crime narrative became the most popular podcast ever in 2014, and the podcast community has been defined by its steady growth and massive potential ever since.

According to the latest numbers from Edison Research, monthly podcast listenership in 2017 is now 24 percent, up from 21 percent the year prior. That data point means two things: First, the podcast community is showing significant growth, and second, there's a lot of room for it to grow even more. Plenty of the creators speaking at PodCon seem aware of this, and explicitly discuss the environment of cooperation.

“I feel less competition and more solidarity with other small networks,” Fink went on to say.

For podcasters, the real problem is the 70-odd percent of the general population that don't listen monthly, and the path towards reeling them in starts with consolidating the disparate fans and podcasters into a critical mass.

Following in the mold of VidCon, PodCon splits the difference between two different types of attendees: the fans and the creatives. While the event heavily caters to fandoms of the biggest podcasts — a handful of podcasts recorded live episodes to the cheers of the crowds and signing booths consistently drew large lines — a number of panels also addressed young creators hoping to make it big.

Legal issues discussed ranged from music rights (Justin McElroy: “To my knowledge no one has ever sued a podcast for using their music. But I don't wanna be the first!”) to network contracts (99% Invisible‘s Roman Mars: “I've seen some terrible ones I'd tell people not to sign”). PodCon isn't just celebrating diversity and inclusion: The conference is helping nascent creators take actionable steps towards real success.

PodCon isn't reinventing the wheel here. Live podcast shows, lectures aimed at creatives, conferences for audio industry members, and fan-centric podcast get-togethers have all been around for years. But the event is larger than the sum of its parts. By giving the fans something to rally around — on an annual basis, if the conference was as large a success as it appears to have been — PodCon is triggering a virtuous cycle aimed at boosting the already rising podcast voices of diverse fans and creators everywhere. PodCon might be small today, but it's looking towards a far larger future.