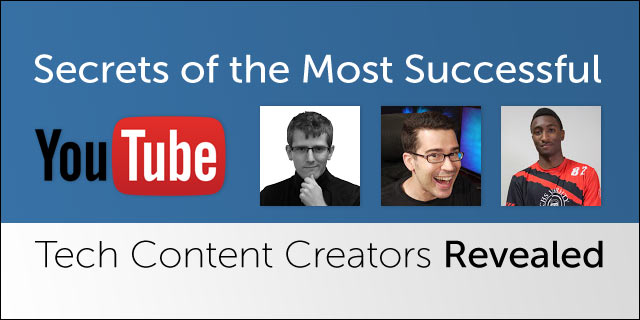 This is a guest post by Jesse Lakes, co-founder and CEO of GeoRiot.

Tech + YouTube is the perfect union, and to the lucky few who have made it big in the tech YouTube game, using the powerful platform to create videos and content has afforded them opportunities to grow at a rate they never could have imagined. I recently sat down with a few of the most notable creators in the space, to bring you their secret sauce and inspire future generations of creators.

Secret #1 Be Transparent, Creative, and Real

We looked no further than the tech review super star Marques Brownlee (aka MKBHD) for the first morsel of advice. “YouTube is different from five years ago because there are so many more people doing it! That's the beauty of YouTube – anyone can pick up a camera and talk, so it becomes a challenge to differentiate yourself and your content.” Marques has nearly two million subscribers to his channel, making him one of the best in his niche on Youtube.

“The secret to a healthy relationship with viewers is transparency”, said tech reviewer Linus Sebastian of LinusTechTips, “I think one of the biggest reasons a content creator can have trouble monetizing their content is that their viewers feel like they don't know what's the blogger's opinion and what's a paid endorsement. We work around this by being 100% up front with our viewers so we can work with our advertisers while maintaining the trust of our audience.” Linus should know, his channel has over a million subscribers pushing him into the top echelon of tech bloggers on YouTube.

Chris Pirrilo of LockerGnome and the recently created, GeekLifestyles fame had this to say, “Be yourself, show your personality, and don't do something that someone else is doing.” Chris takes his own advice and now boasts more than 350k subscribers to his channels, due in part to his vibrant personality and passion for what he does.

Secret #2 YouTube Blogging Doesn’t Have to Be Your Full Time Job, But it Can Be

If the old saying “Do what you love and the money will follow” appeals to you, you might want to look to our YouTube super heroes for a little inspiration on all sides of the spectrum.

Chris Pirrilo told me that he is himself for a living – “which is a great job title, allowing me to work through a variety of situations and remain flexible enough to change as the industry changes.” But what about the money? How does Chris make a living? “Both patrons and sponsors keep me going, as they value what I do at a deeper level than the average person who clicks in to see something and never comes back.”

Marques Brownlee is a full time professional frisbee player and a student, but he told me that he puts full time hours into making videos every week. On the opposite end of the spectrum lies Linus. Linus created the Linus Media Group, which has grown to 7 employees, he told me that working there is the full time job of each and every one of those people.

Secret #3 Don’t Expect to Get Rich

In following with the do what you love theme in Secret 2, Linus further expanded on the topic “Don't expect to get rich doing this. If you're doing it out of passion you'll have much more success, and then you might make some money, but if you're doing it for any reason other than love of technology, A) you'll be disappointed by the size of your pay cheque – especially if you factor in how much money you're going to have to spend on tech gadgets to review, and B) No one will want to watch you anyway because viewers are WAY too smart to listen to someone who doesn't really care talk about this stuff.”

In a lightning round, I asked the guys what their favorite channels are on Youtube:

Do you have any tricks of the YouTube trade to share? Be sure to leave them in the comments below!

About the Guest Author: Jesse Lakes first realized he had an issue with Geo-Fragmentation in 2009. He’s been working on a cure ever since. This path has taken him from being the first author about the iTunes Affiliate Program, to a job with Apple as the Global Product Manager of the iTunes Affiliate Program, and now as the co-founder and CEO of GeoRiot. Based in Seattle, GeoRiot is working to eradicate Geo-Fragmentation and bridge the Purchasing Gap.