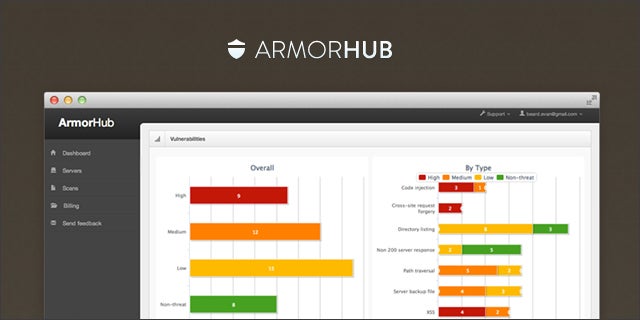 Specifically, ArmorHub offers a web security service that finds and fixes vulnerabilities in a simple, straightforward way. Together, founders Kendall Dabaghi and Evan Beard know a thing or two about both web security and startups. Dabaghi spent two years at McKinsey working on big data issues for IT companies, and Beard previously founded eTacts, which he sold to Salesforce in 2010.

I spoke with Dabaghi to get a better sense of his new company, as well as a look into what it takes to start up.

Tech Cocktail: Who does ArmorHub target?

Dabaghi:  “ArmorHub targets small and medium businesses that are looking for a simple way to secure their website. Existing services tend to require lengthy consultant discussions to get started and extensive technical knowledge to use. ArmorHub enables a nontechnical business person to quickly get full use of the security scanner by finding and fixing vulnerabilities without ever needing to know any code.”

Tech Cocktail:  What was the inspiration behind ArmorHub?

Dabaghi:  “We've been attending security/hacker conferences like HOPE and Defcon for years, and after spending tons of time on web development, we saw the need for a product that would help you quickly find and fix your site's vulnerabilities. Our goal is to take care of your site's security so the only thing you have to worry about is building your business.”

Tech Cocktail:  Who is ArmorHub's biggest competitor, and what makes you different?

Dabaghi:  “Our most significant competitor is McAfee. We've talked to people who aren't satisfied with their offering, and have focused on building a product that has much more comprehensive scans with more flexibility and ease of use. And instead of handing off a list of vulnerabilities to you, we can even fix the ones that we find for you. We are web developers ourselves, and have designed our scanner to detect the most frequent pitfalls associated with using popular web frameworks (Rails, Django, etc.) and web platforms (WordPress, Joomla, Magento).”

Tech Cocktail:  Any words of wisdom for others who would like to start a company?

Dabaghi:  “Ben Horowitz had a powerful blog post a few weeks ago on the difficulty of starting a business, which spoke to the strain and tension that every founder goes through. Even with a vision for the beautiful product and team that you want to build, things never go exactly as planned, and even after months of work, you can never be sure that the rest of the world will value what you've built as much as you do. There is no answer to The Struggle, but you keep working – for yourself, for the team, and for your product – until things work out in the end.