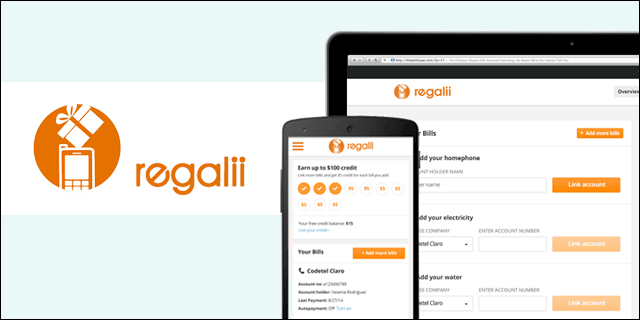 Call it an innovative support system that helps users pay for their family’s bills back home in Mexico and the Dominican Republic. Regalii is a fast and convenient way to ensure that all bills – tuition, utilities, and more – are paid on time with a few clicks of a button.

“It’s really hard to support your family from the US back home and all of the services that exist are super, super expensive,” says Inigo Rumayor, the cofounder and head of product at Regalii. “So we wanted to build something that will allow people to support their families back home in a more efficient way.”

According to the Pew Hispanic Center Tabulations of 2010, American Community Survey, there are more than 19 million Hispanic immigrants in the US; they spend more than $41 billion every year for their families in Latin America, with 20% of that total used to pay utility bills. These statistics show the clear need for a product like Regalii. Here’s what you should know about some of its features:

Regalii works with companies such as Gas Natural Mexico, Aster, and Dish. Not only is it easy to use, but it makes supporting one’s family comfortable and convenient.

“With Regalii, what you send is what they get,” reads an excerpt on its site. “Regalii's hope is that through transforming the experience surrounding money transfer, our customers will be able to enjoy the process of supporting their loved ones overseas.”

While the company is currently only working with families in the Dominican Republic and Mexico, the Regalii team plans to be in all of Latin America by the end of the year.

“Once that’s done, there are a lot of opportunities in the market and in the industry,” says Rumayor. “The reality is that the industry hasn’t changed, and you have a huge amount of money that is being moved from the US.”

Regalii is seeing a number of successes now, but it wasn’t always easy. Rumayor left the University of Pennsylvania after his sophomore year to work on the company with the cofounder and CEO, Edrizio De La Cruz. Other team members include Juan Maldonado, cofounder and COO; and Ramon De La Cruz, the head of D.R. operations. The team bootstrapped for almost a year before they were accepted into Y Combinator.

“It allows you to really focus on the right things and the right metrics,” says Rumayor of the accelerator. “After that we raised a round of angel investment.”

The company is now backed by Andreessen Horowitz, Winklevoss Capital, and Maverick, among other institutions and investors.

Rumayor says he’s seen other entrepreneurs have an idea who don’t have the ability to turn it into a business. His advice for young entrepreneurs is simple: just get started and don’t be afraid to make mistakes.

“My advice is to really try it for awhile. For us, it basically took us a year until we saw any real progress. It was just about learning as we were making a lot of mistakes,” says Rumayor. “A lot of people have their ideas and they think it’s going to happen overnight – commit to something for at least six months and I think you’re going to great results or at least an amazing learning experience you won’t get anywhere else.”