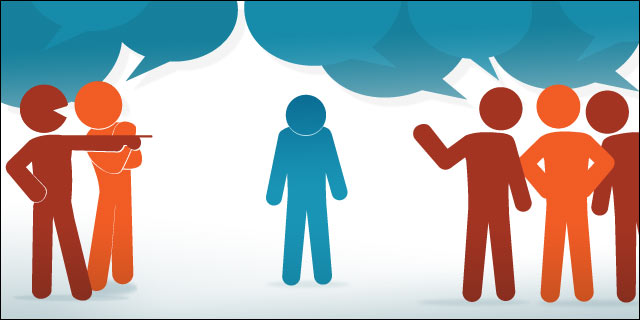 In researcher Brené Brown’s book Daring Greatly, she takes a chapter to explain how shame is holding us back. She tells the story of a woman whose boss made two lists on the wall: “Winners” and “Losers.” After years on the winners’ list, she lost a big client and found herself with a big L on her forehead.

You’re probably thinking: our company isn’t that bad! Probably not. But according to Brown, a shame culture isn’t always obvious.

“Shame works like termites in a house. It’s hidden in the dark behind the walls and constantly eating away at our infrastructure, until one day the stairs suddenly crumble,” she writes. “Only then do we realize that it’s only a matter of time before the walls come tumbling down.”

Shame is the fear of being unworthy and disconnected from others. It’s the feeling that we are bad, and not [fill in the blank] enough. And if your team feels shame, that will trickle down to customers and partners and anyone else they interact with.

“Shame can only rise so far in any system before people disengage to protect themselves. When we’re disengaged, we don’t show up, we don’t contribute, and we stop caring,” Brown writes.

Here are 5 of Brown's signs that you have a shame culture at your startup.

Fear of speaking up

By now, most startups know that embracing failure is the route to success. But even if you say you’re pro-failure, are you really putting that into practice? That means encouraging people to speak up, share their crazy ideas, and not get laughed at, ignored, or put down.

CEO Kevin Surace told Brown that the biggest barrier to innovation was “the fear of introducing an idea and being ridiculed, laughed at, and belittled. If you’re willing to subject yourself to that experience, and if you survive it, then it becomes the fear of failure and the fear of being wrong. People believe they’re only as good as their ideas and that their ideas can’t seem too ‘out there’ and they can’t ‘not know’ everything.”

Fear of asking for help

Do your teammates regularly come to you and each other with questions? People who feel shame are afraid to admit that they don’t know something or don’t have a certain skill. People who feel worthy can own their ignorance and reach out for support, which ends up helping them grow.

In addition to asking for help, a healthy culture includes giving and receiving feedback openly and positively. If you feel shame, all your self-worth is on the line when you hear a piece of constructive criticism from a colleague or boss, and your instinct is to defend and explain yourself. If you don’t feel shame, you’re able to iterate and improve and not take it personally.

Also, the simple lack of feedback can start to foster a shame culture. Think about it from the team’s perspective: if they get no feedback, they start to worry about their performance. Am I doing badly? They may start to think you don’t care as much about them, and begin the process of disconnecting.

One of Brown’s pointed insights is that people who blame others feel shame. If you feel the need to point the finger at someone else, you’re probably feeling bad and defensive about yourself. This is particularly true when the blame takes a public form. I know a woman whose boss blatantly called out everyone’s weaknesses in a meeting, saying, “You hate technology” and “You don’t work fast enough.”

People should be held accountable, but the right attitude is: we’re on the same time, we all contributed to this, how can we fix it together?

Lots of gossip is a shame-based activity, putting someone down for something they did or said. And if a team member realizes they’re being talked about – and they will – they start being afraid of speaking out. Name-calling and favoritism separate people into categories of good and bad, and it’s not even a healthy experience for the favorites – they’ll stake their worth on being a favorite, and start to be afraid someone else could take their place.

Shame culture can be insidious, and Brown has a few strategies for combating it. One is to identify the ways that shame is already present in your company and own up to them. Then, we need to teach people how to give and receive feedback, and set the expectation that it’s not always easy – nor is putting your ideas out there. In the end, it will depend on supportive leaders who are willing to have tough and honest conversations about shame.