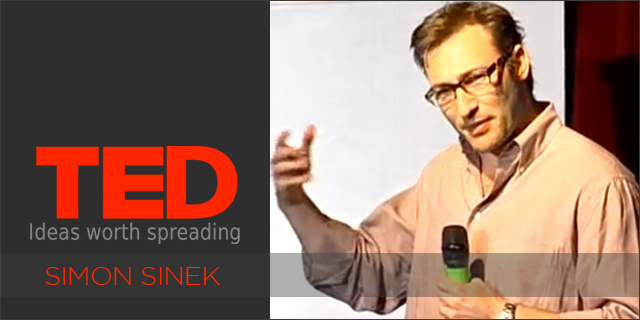 In “How great leaders inspire action,” a talk from TEDxPugetSound, Start with Why author Simon Sinek explains the stupidly simple difference between successful and unsuccessful leadership.

Many failed examples of leadership and marketing start with something along the lines of “I have a plan” (including today’s politicians). They start talking about “what” they're selling, then “how” it’s made or done, then the “why” or purpose or cause. If Apple marketed this way, they would talk about computers, beautifully designed, disrupting the status quo.

But great leaders, Apple included, communicate in the opposite way. They talk about challenging assumptions and thinking differently, about the sleekness of their design, and then about the specific features and benefits of their products.

“People don’t buy what you do; they buy why you do it,” Sinek repeats meditatively in his talk. “The goal is not just to sell to people who need what you have . . . the goal is to do business with people who believe what you believe.”

The same goes for hiring employees, as well as for customers.

Sinek finds support for this view not just in examples like Apple and the Wright brothers, but in biology and consumer behavior. The decision-making part of our brains is the limbic brain, which controls feelings like trust and loyalty and is influenced by “why” messages. The neocortex may control our analytical thought and listen to “what” messages, but it isn’t the place where fierce love and desire to purchase are cultivated.

And the people whom you need to sell to first – the innovators and early adopters, consisting of about 16 percent of your market – are most influenced by their limbic brains. Only after they’re on board will the 68 percent majority of the population be willing to give you a shot.

The final insight Sinek shares is the reason we consumers follow a “why” – in order to prove something about ourselves. Apple users buy all sorts of gadgets to demonstrate how forward-thinking they are; attendees at King’s speech (25 percent of whom were white) wanted to identify themselves with the America of equality that he was describing.

For more, watch his TEDx talk: