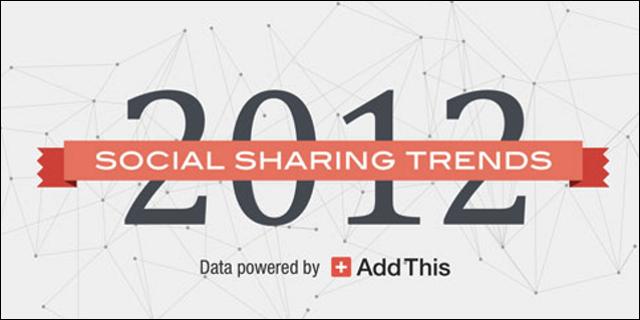 Their infographic, based on sharing across 14 million domains, is below. And it contains a lesson for startups about making assumptions about your customers. Entrepreneurs tend to immerse themselves in a geeky, tech-savvy world, and they can forget that most people don’t know what an API is, or care about super-minimalist design.

As the data show, Apple’s iPad announcement and the Facebook IPO – veritable news tsunamis in the tech world – are but blips in the year’s overall sharing. Mainstream events like the Olympics, Hurricane Sandy, and the election were far more buzzed about. Even the Chick-fil-A controversy and Whitney Houston’s death got more attention. In that same vein, the year’s biggest hit was a 34-year-old rapper from South Korea and his weird dance moves.

Launches like the iPad “are a one-way conversation with customers,” says Greg Cypes, director of product at AddThis. “In other words, they're not very interactive. Hurricane Sandy and the election are much more interactive events with wide-spread impact.”

He adds, “Events like Hurricane Sandy and the election impact millions of people whether they want to be impacted or not – and in unforseeable ways. This makes people's reactions naturally fervent and emotional. While tech industry announcements are emotional, it's for a more select group of passionate early adopters and enthusiasts. So, the tech industry has the opportunity to: make product launches more interactive with customers, and create clear, emotional connections with a wider audience, perhaps including the element of suspense or surprise.”

Here’s the social sharing landscape of 2012: