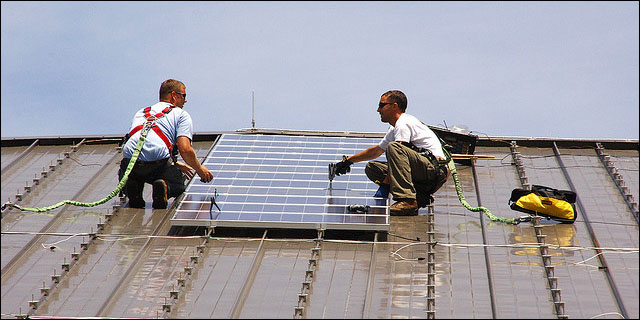 With use of solar energy increasing and a climate-induced doomsday looming, you might have considered powering your business with solar panels. The benefits for business is two-fold – solar power can reduce costs and help a business align themselves with consumers who are increasingly concerned with environmental credentials.

While sunlight levels differ from state to state there’s a huge amount of energy to be tapped into in the U.S. Even Alaska, the least sunny state, gets more sunlight than the UK annually; meanwhile, if Texas were to harness their solar energy they could power the entire world.

As it stands, getting solar panels set up isn’t cheap. Costs are falling in the US as the technology advances, but they’re still way above the European average. So how and why do businesses still install panels?

In the long term, solar energy can save a business money. The average US home powered by sunlight saving $1680 a year. After installation costs are paid, businesses can be bill-free (as long as electrical needs are being covered). Eventually these first-time costs will be covered and there’s even a chance to make some profit too. If businesses are able to generate a surplus of energy they can sell it on in 43 of 50 states.

One big criticism of solar energy is that it’s too reliant on the weather. The environment is going to make a big difference to how much energy a business can generate. Businesses surrounded by skyscrapers may struggle, for example. With little sunshine it will take a long time to recoup installation costs.

If the business is operational at night they’ll face an obvious problem. You could collect and store energy during the day, but solar batteries can be very expensive. Luckily, effort is being made to advance the technology and bring costs down to a more affordable level.

Solar power also offers protection from global issues. While gas prices in the US are low at the moment, this chart shows they’re not exactly stable. Relying on solar energy means businesses won’t have to worry about fluctuating energy costs.

Then there’s the minor issue of curtailing climate change. If more businesses harness renewable energy there might be a more positive future to look forward to. Solar energy is much, much cleaner than fossil fuels and the continued use of them could cause irreparable damage to the Earth.

Using solar power can also be an effective part of your marketing. In the US there isn’t a single state where climate change sceptics are in the majority. That doesn’t mean there aren’t a lot of them about, but it’s worth noting opinions are changing. It certainly won’t be a bad idea to shout about your green credentials in states like Massachusetts, where 88% of the population believe in climate change.

In the end, you’re going to need to front some cash to get started, but with cost saving and the planet at stake, solar panels can be a great way to save money and do some good.