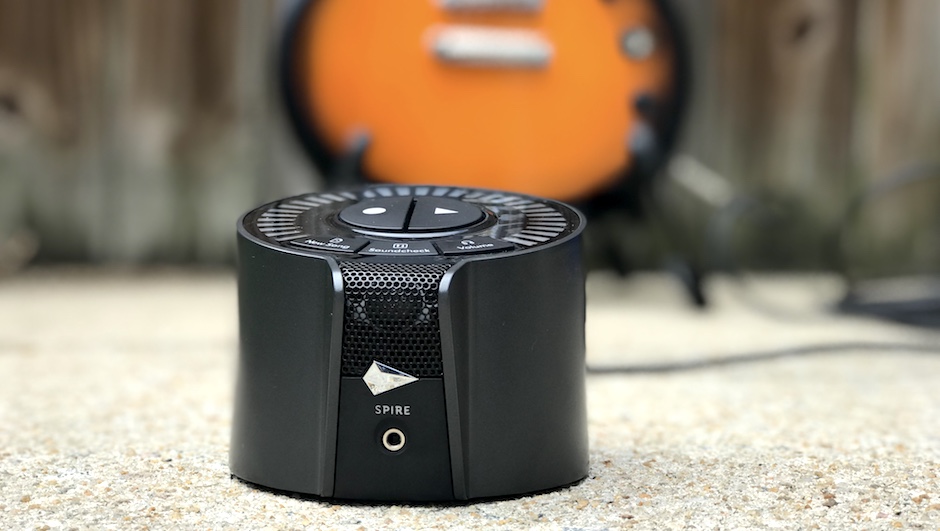 Like you, many of us as kids sang in the shower, attempted to play some sort of instrument in middle school, or went through countless hours of lessons with the dream of one day actually doing something with that musical talent.

Then at some point, we all realized we sort of suck, and that a cow in labor probably sings better than us. However, for the select few that continue to actually have artistic talent and musical skills, they likely save it for their own amusement due to a lack of equipment to capture it all. Ok, so that may be a bit of an exaggeration, but let’s just assume that’s the case so it can play into what we’re reviewing here today, which is a device to capture, edit, and more easily distribute both musical and voice recordings.

Spire Studio, a product of iZotope, is an advanced consumer designed product that was created for just these kind of situations. Up until now most recording devices are more or less designed for studios and home studios, require a good bit of technical skills, can be quite costly, and are generally large clunky devices. Spire Studio on the other hand is considerably affordable, has an easy to use interface (both on the device and in-app), will capture both voice and musical instruments, and allows for both editing and multitrack recording.

With the holidays rapidly approach, we gave Spire a whirl to see if this would be an ideal gift for the budding or well established musician in your life. And, because I too no longer have musical talent (sorry Rob), I brought in my hippy brother to lend a hand.

If you’ve ever connected a device through a Bluetooth or wireless connection to your phone, the Spire Studio hardware follows the same simple process. It’s as simple as downloading the Spire app, pressing the Spire icon in the top right, then tethering your smartphone to it through its built in wifi. And that’s it, you’re up and running in just a few minutes. Recording your first song is also just as easy as hitting the record icon on the hardware.

Recording Your Next Hit 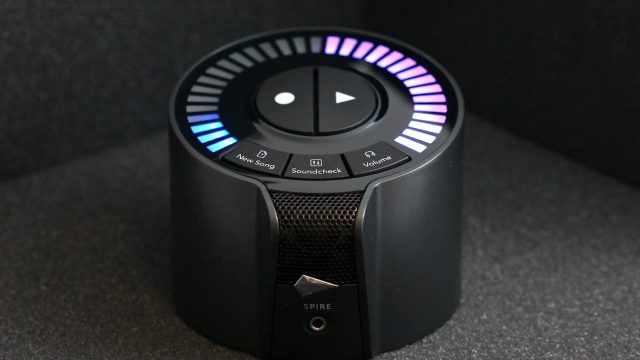 On the surface, the Spire Studio is designed to be a super easy, portable solution to record both musical instruments and spoken word (singing). It certainly does this well, and in fact it makes the process pretty damn easy. However, where the device really shines is in its collaboration functionality, and we’ll dig into that in just a minute.

For recording music the Spire Studio tackles it in a few different ways: recording voice or music with the built in microphone, direct inputs to instruments or microphones, or a combination of both of these. Based on our testing, we found that the Spire does work well enough just using the microphone, but if you really plan on doing anything with the track, you’ll want to use direct inputs for the instruments and microphone. That’s the basics, but within each project you can get a lot more advanced.

For starters, you can of course adjust the levels of whatever you're recording (instrument, voice, etc.), and automatically do this through the soundcheck feature. However, if you want to get a bit extra, once the hardware is connected you can also add effects like reverb, Tube 30, Bass, an acoustic shaper, a spacey sound, and a few others. In all, this nixes the need for a pedal and gives you a bit more to work with on top of it.

You also get basic editing controls that allow you to trim a track within a project, as well as mixing tracks together (adjusting levels and volume between tracks). And for those of you looking to stick to a specific rhythm, the app even includes a metronome, which will be helpful as you’ll typically be using headphones directly plugged into your phone or the Spire hardware while recording.

Here’s what the Spire Studio is packing:

Overall the Spire Studio has a lot to offer in a small package, and more or less allows you to consolidate other hardware. Based on the output, the recording quality is wonderful, especially with direct inputs, but the built-in mic will leave some room to be desired. However, that serves its own purpose for quick captures and live sessions. It should also be noted that there are other battery powered devices on the market, and some of them throw out feedback when powered in that format. The Spire Studio has absolutely no negative feedback or latency issues when either directly powered or through battery power. 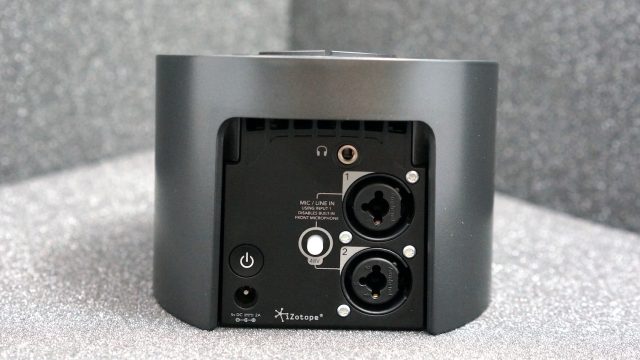 As my brother and I played around with Spire Studio, it was evident that it captures both music and singing incredibly well. That’s what it’s supposed to do, and allows it to be a competing solution to some of the cheaper devices on the market. What makes Spire even more unique is the built-in collaboration tools. Sure, you can capture, edit, and send files relatively easily on mobile devices and through pro equipment now, but that takes a few added steps, pieces of hardware, and then sending the file off in cloud storage or email.

With Spire’s app, all you need to do is export the project, send it through whatever platform you want, and then your band mate imports the project. They can then record an additional track on the project, trim it up, and send the project back. If there was one massive selling point for bands, it would be this.

There are plenty of recording devices on the market, some at the hobbyist level and plenty more at the pro level. The Spire Studio is sort of the healthy medium between both in that it has advanced recording features, acts as an amp, has dual recording channels, and includes a few unique features even the pro stuff doesn’t have. Based on pricing, these devices can range anywhere from $60-$200 or so, and then the pro level studio equipment can have a few zeroes added on for the really intense stuff.

While it certainly can replace the hodgepodge of devices you may have around the house and have been using, it won’t replace your home or professional studio equipment. Think of Spire as your portable studio, or something perfectly designed for collaboration from afar.

Take for example the Forcusrite Scarlett 2i2, a relatively popular device for recording instruments through direct inputs. It’s $150, but lacks the bells and whistles of Spire nor a built in power source or microphone. These kinds of devices also typically need some sort of mixing board or post recording software to adjust it where you want. The Spire Studio sort of tackles most of that, with the exception of polishing tracks in editing post-recording. 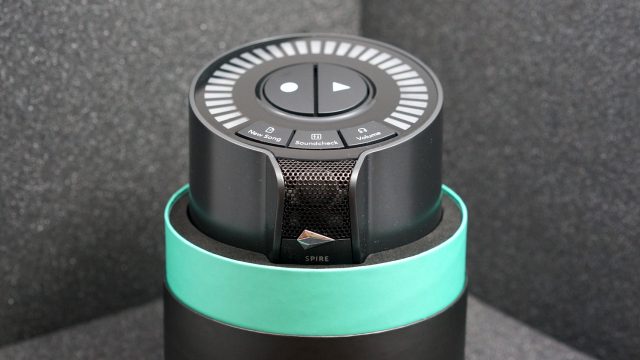 On the looks department, the Spire Studio really doesn’t look like other recording equipment on the market. Most of the competing solutions the are on the pro level, typically come in some sort of long, boxy looking housing, and are either designed to mount in a stack or sit on a table top for editing.

If I were to describe the Spire Studio, it’s as if someone lobbed off the lower part of a fast food fountain drink cup, gave it a nice metal finish, and topped it off with a touch dial and a few physical buttons. Ok, so that doesn’t sound all that appealing, but it’s basically that and when comparing it to other devices on the market it’s much smaller, fully battery powered, and is insanely simple to understand. This thing will fit right in with wherever you store your music equipment. Now on to the more important aspect, how easy it is to use.

Being the serial thrower away of instructions, I figured the Spire Studio may break my regular streak. However, after about 20 minutes of use with my brother, we were quickly able to fully navigate and use the Spire Studio to its full potential, all because it was generally very simple to understand. The device is super easy, whereas the app is a bit more complicated because some of the controls are semi-hidden under different basic use features.

To record anything, it’s really as simple as turning the Spire Studio on and then hitting record. For best use, it’s always ideal to use the soundcheck button first so that the levels can automatically adjust to your playing or singing style. And that’s it, you’re off and recording. To hear exactly what it sounds like while in session, just plug in a regular pair of headphones.

For better sound quality, you’ll want to use the line in option on the back. As you can hear in the review, the audio recording with a direct connection sounds amazing, but without it that is more beneficial for those doing quick captures and listening back on practices.

The Spire Studio hardware is straightforward and easy to grapple, but the power behind it comes down to the free app. Now you don’t need the hardware itself to gain the mixing, editing, and recording functionality that Spire has to offer since you can do it with your phone, but it will not even come close to the same quality. It will however let you toy around with the features to see if it’d be a worthwhile platform. With the Spire Studio device connected through wifi to the app, you’ll get a great deal more control over what you are recording. At the basic level you’ll see your levels for any inputs connected, but you can also manually tweak the levels, adjust the effects, add in a metronome, and stack up to 8 tracks for mixing.

Once a project has been trimmed, stacked with tracks, and is ready to go, it’s also incredibly easy to either export it or upload it directly to SoundCloud. The only downside I found with the app is that you can’t import your tracks from other projects into different projects, so for that you’ll have to mix those in a separate app or program. That said, the sharing interface also makes it easy to port the tracks and projects to other apps, so that’s not a huge issue.

Overall the Spire Studio is certainly easier to use than most recording equipment I’ve toyed around with, and this comes from someone with a lot of broadcast training. However, if you’re recording and mixing skills come down to a basic app, you’ll want to pay specific attention to the tips and walkthroughs, or even -insert gasping sound- read the instructions. It’s definitely beyond recording toy status, but also designed to be more accessible than pro equipment.

Should you buy the Spire Studio? If you’re looking to do more than just capture music, absolutely. Spire does quite a bit more than your standard recording, which is why it may not appeal to everyone who is just looking to nab some files and upload it. However, for people who are serious about the quality of their sound, want to mix tracks, and especially those looking to collaborate, Spire Studio is an awesome fit. For these reasons, the price point, and its ease of use, we can confidently recommend the Spire Studio. This will especially make a great gift during the holidays.

Where to buy: Spire