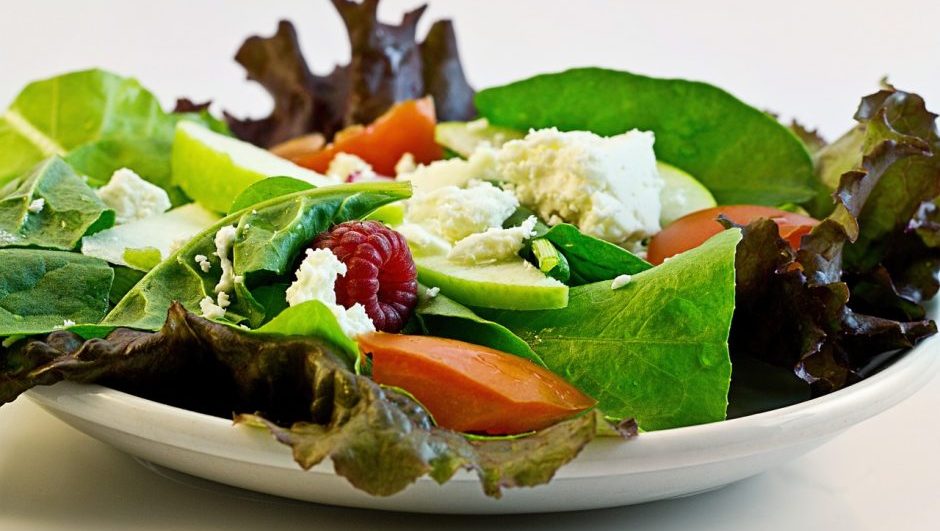 It's lunchtime and you only have 15 minutes to grab your food and go and having a healthy food choice already prepared would be ideal. That's the thought behind the startup Veebie, a self-service food cart where customers can order and pay for their grab-and-go meal through their mobile device and pick it up with zero wait. The food is supplied by local partner restaurant. Not only will you get fresh food fast but it's designed to be convenient to those who work in a high density area.

To obtain some customer validation, Veebie founder and CEO Steven Sperry ran a 10-day test in the middle of downtown Portland, Maine to see if there was a demand and if people would use the kiosk for lunch. The results were more than expected. 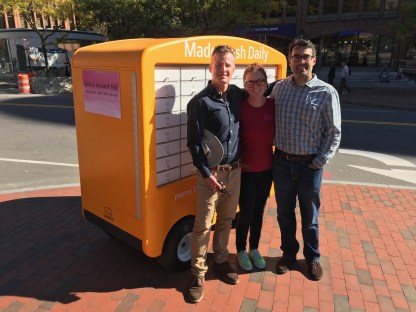 “We already have our answer,” Sperry said as he stood beside the cart on Wednesday. “People are already doing it.”

By 1:30 that day all but one of the kiosk’s 48 cubbies, all of which were filled at 11:30 that morning by sandwiches made by Sisters Gourmet Deli, were empty.

Each morning, Veebie fills up the kiosk’s 48 cubbies with lunch items from a partner restaurant or food company—for this trial run, it worked with Sisters Gourmet Deli, Union Kitchen and b.Good—and parks it in a highly trafficked area. People are able to access the day’s menu via Veebie’s website (eventually the company will launch its own app), select the item they want, pay for it, and grab their food from the cubby their receipt specifies. The prototype doesn’t have locks on the cubbies, but the production version will have locked cubbies that only unlock when the buyer arrives to pick up their food, Sperry said. 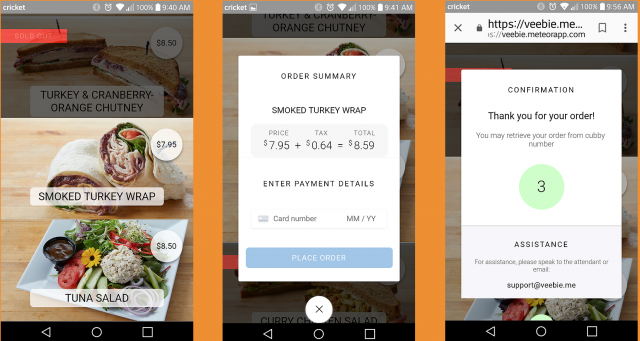 The idea for the business came to Sperry one day last summer when he found himself in downtown Portland at lunchtime and wanted to grab a quick lunch. He placed an order at an unnamed food truck, and then he waited. And waited. Finally, 25 minutes later, he heard his name called and went to pick up his food.

“It was one of those days when I just didn’t have 25 minutes to wait,” said Sperry. “So, I asked myself: How would you eliminate the wait?”

He zeroed in on two factors that would expedite the process: Make the food prior to the lunch-time rush, and give people the ability to serve themselves.

“When you do those two things, you eliminate the wait,” he said.

Sperry, a serial tech entrepreneur who moved back to Maine last year after living and working in Seattle for most of his career, ran with the idea. Being a software guy, he knew he needed help in the areas where he wasn’t an expert, so he enlisted two cofounders in the endeavor: Michaela McVetty, owner of Sisters Gourmet Deli, which is on Monument Square; and Yona Belfort, founder of Vital Innovation, a product design firm in Portland.

McVetty is now Veebie’s Director of Operations and Belfort is VP of Product Development.

Now that the partners have the answer that the 10-day test period was designed to answer, they’ll execute on the next phase of the business: raising capital to design and build several of the production kiosks, and explore what cities it wants to target for its “scale test,” Sperry said.

While Veebie will likely maintain a presence in Portland when it relaunches next spring, Sperry said the business’ real goal is to deploy its kiosks in the some of the country’s largest urban areas: New York, Los Angeles, Chicago, Austin, San Francisco, etc.

Sperry said he’s already been in discussions with various cities about what regulations would apply to the Veebie kiosks, which he believes should be treated like hot dog stands since they don’t have an engine or any generator.

The business model ultimately calls for the kiosks to be branded for its restaurant and other partners, like Whole Foods, Sperry said. Veebie will own and operate the kiosks, making money from the margins between buying food from its partners at wholesale prices and selling the food at retail prices to consumers. He estimates a cart deployed in a major urban area will generate roughly $500,000 a year in revenue. The cost of manufacturing a cart is a fraction of that, so the payback should be very quick, he said.

Sperry believes restaurants and other food providers will be attracted to the idea because it offers a low-cost way to reach new markets. In the past, Sperry says, if a bricks-and-mortar restaurant wanted to grow its footprint, it’d have a few options: expand into another bricks-and-mortar location, which comes at significant cost, or adopt the food-truck model, which comes with its own significant costs and headaches.

“This is an option for those food businesses to reach new markets at low cost and reduced risk,” he said.

“It’s not designed to replace food trucks,” Sperry said. “But it offers another option for folks and it’s a way to help other local food businesses. So it’s a win all around.”

Read about more startups emerging in Maine at TechCo