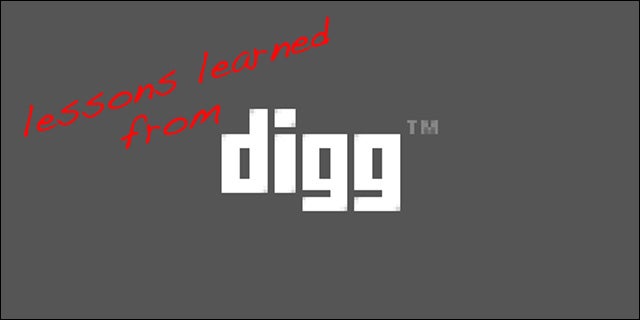 This week we were dealt a great reminder about the importance of timing and customer-focus when building a business with the sale of the final assets of Digg.

Digg was at the front of the social media curve, gaining mass-audience before either Facebook or Twitter were prominent, helping build new media sites like TechCrunch and Mashable by driving traffic and creating a new model for social news sharing. Digg had huge social capital, traffic and funding.

At the time, Digg had options to sell, and as a venture backed company, that is the route they would need to eventually go, unless they were planning to IPO. But for their own reasons, their leadership decided on a different path. That path included major product changes that drove away many of their most loyal users. They got off course and sadly, never found their way back. The influences behind Digg's decisions are unclear, but it is safe to say they were under pressure to continue to grow. I loved Digg and the community they built and I am sad to see it go down this way.

In Digg's glory there was nothing like the rush you got as a blogger from having one of your articles on the Digg homepage – it was a pure adrenaline shot as your traffic soared.

It's also important to keep in mind that early exits aren’t always the right answer.  By this standard Facebook would have sold to Apple, Google or Yahoo.  Either way, you're gambling.

Digg's biggest mistake however, was quite clear: they didn't listen to their users. With the redesign mentioned earlier, they changed key features that upset their loyal user base. Digg didn't listen, and as a result, much of the Digg audience migrated to other platforms like Reddit, Twitter and Facebook which were picking up steam and in some cases even taking on similar functionality as Digg.

Reddit, which did exit to Condé Nast, can learn from Digg and stay true to their user base.  A community driven, social news website is nothing without, well, a community.

It's easy to look at the success story of the moment and get caught up in the hype. Or to look at an outcome like this and judge them harshly. So I encourage everyone to look at products and companies like Digg to try and learn from them. These were smart people with lots of resources and big goals – so how can we as entrepreneurs avoid the same pitfalls?