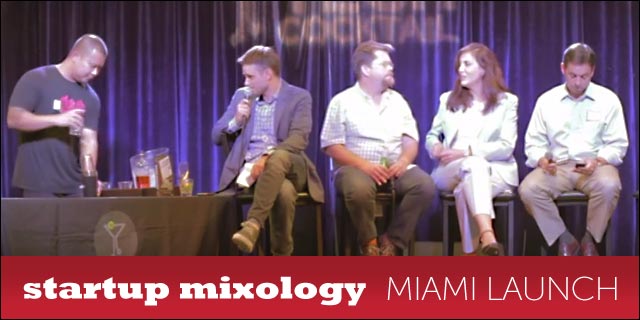 The Miami stop on the Startup Mixology book tour was epic. Not only was there a certified mixologist there to craft cocktails for the audience, there were also llamas – and an amazing panel of 4 entrepreneurs.

Matt Haggman, Lori Anne Wardi, Hugh MacLeod, and Jermaine Dupri all graced the stage with their presence, and they spoke about the promise of greatness Miami has. That is, there has been major growth over the last 4 years in Miami, and these entrepreneurs have been central, or will be central, to maintaining that growth.

Haggman, of The Knight Foundation, spoke about fostering a tech ecosystem in Miami in a different way than other big cities. Instead of simply investing in entrepreneurs, The Knight Foundation has gone much further to bet on the people in the community versus hedging bets on institutions.

They’ve been setting a robust events calendar and creating places entrepreneurs can work, get mentorship, and receive funding information. This radical differentiation opened the gates for Wardi to speak about her time with forming the .CO domain brand.

These days the .CO domain is almost synonymous with a successful business and strong growth patterns. Further, Wardi and the .CO team strive to actually build and maintain a legitimate relationship with people who register for domains.

Or as MacLeod would say, they’ve perfected the art behind the craft. As a cartoonist who illustrates posters or business cards for companies MacLeod often ponders that intersection of where art and business meet.

We use art to ask ourselves what is possible, why we are here, and what we’re doing with our lives. Much the same, we use business to express and grapple with similar, fundamental truths and trends.

Dupri can see eye to eye with MacLeod because he’s also an entrepreneur-artist as founder of Global 14 and So So Def Recordings. The trends he pays attention to are close to home: Global 14 is a social networking site and Dupri thinks social media and networking are crucial for success.

That’s because the internet isn’t what it used to be. Rather, the internet is being controlled by smaller communities, like the one on his site. The users want to make your product about them just as much as it is about you, and leveraging social media is the cream of the crop when it comes to the dissemination of information.

All of this and more were celebrated in Miami, here’s the video: