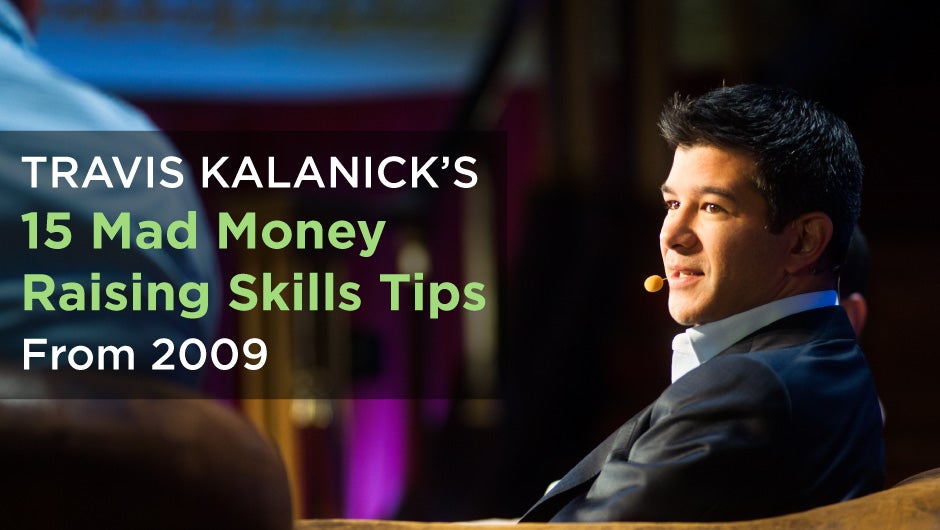 A bunch of companies I’m involved in have gone for seed funding in the last few months. After one of them asked for the ultra-warrior-l33t-skillz, I thought I’d put this post up and break it down.

Update: This Guest Contribution is by Travis Kalanick, now the CEO of successful ride logistics company Uber, which raised over $1 billion in Series D funding in 2014.

If any of you are raising your first startup or seed money, this is a must read. Would love to hear any of your stories/feedback in the comments on this post…

1.) Priming the pump: How do you get started with rounding up some angels for a seed round? It’s pretty simple. Go to angel gatherings, industry conferences, any and all networking events. Meet people who are angels or who know angels. Give ‘em the elevator pitch. KEEP IT SHORT. Set up Intro meetings. Also, if you’re not located in a startup hotspot, then find/make a friend in Silicon Valley and stay on his/her couch for a month and make sure you’re meeting with somebody new EVERY DAY.

2.) Intro meetings: Informal discussion where you pitch the company over a lunch/coffee/etc., and expand potential angel network through referrals. Get your pitch down to 5-10 minutes, and prepare a tight FAQ in your head so that you have tight answers to the top 20 questions. Let them pay. Be proud of your scrappiness.

3.) ABC’s – Always Be Closing: At the end of every meeting, get a clear understanding of where they stand on your deal opportunity. Shoot for getting an amount they would be interested in investing. You won’t usually get a commitment on the first meeting but do not accept vagueness. Get a clear idea of where they stand, and what next steps might be to move them through the pipeline. Hypotheticals are also useful: When I lock on my lead investor, how much would you be interested in investing?

4.) Referrals are key “Glad you’re pumped… any thoughts on who else I should meet with?” If your pitch is kicking ass, then most angels will immediately offer up a couple folks they can hook you up with. Regardless, always ask for more folks you can connect with.

5.) Advisors Turn a couple of these potential angels into advisors. Having a few top-notch people in your corner can make all the difference in turning the tide in an angel round. Everybody’s going to want to help and everybody will want a piece. Be selective, don’t settle. An average advisor is worth 1/10 the amount of an awesome advisor. Make it known that you expect your advisors to invest in the round. No exceptions—an advisor that doesn’t invest in the round will have significantly less influence in helping you close a round.

6.) Thought Partner Pick one advisor, co-founder, or mentor who will be your thought partner in managing the process. There is a lot of activity as you go to get your first term sheet, all the way through the close. Strange shit you cannot predict WILL go down. Big personalities, money, valuation, ego, all that makes a nice recipe for some crazy shenanigans. Nailing your messaging, managing the big personalities, keeping momentum going, takes a certain amount of magic, and making that happen is not accidental. It’s hard work, hustle, credibility, and preparation, and you’ll be much better at it with a partner in crime who can help you think through the issues, and craziness that inevitably will go down as you get to closing.

7.) The List: Keep a list (aka pipeline) of the people you’re meeting with, the referrals that they provide you, and the level of their interest in the seed round. Stay on the ball…Always follow up…be the pro that impresses all those investors that interact with you.

8.) Passion/Charisma Are Important: This is the X-factor. It separates the men from the boys in fundraising. If you’re doing a startup, you’re trying to change the world, you’ve kicked your cushy job to the curb, you’ve had Ramen noodles for breakfast lunch and dinner as far as you can remember, and maybe you’ve moved back in with the ‘rents. You’ve definitely got the passion…why else would you be doing this? Don’t be afraid to show it. Every pitch could be your last one (i.e. the dude across the table writes you a check!), know that… give it your all… listen to some music that pumps you up before you get into the meeting, think about all of the great shit you’re doing and could do. Focus on the positive, have confidence, be amped, bring passion to your game, and share the love with the person across from you… bring extreme positivity into the potential investor’s otherwise boring pedestrian day. Watch some of @garyvee to see this in its purest form.

9.) Credibility: DO NOT FIGHT THE TRUTH. If you do, you will become road kill. Do not try to spin out of what your weak points are. Do not try to make something certain that is not. Do not pretend to know something that you don’t. Credibility is the name of the game in fundraising. Every startup investor knows there are uncertainties. We all know there are risks. Accept them for what they are, BUT have a SMART answer for them. How are you addressing the uncertainties? How are you dealing with the risks? Show them you have thought 2 or 3 steps ahead. Be frank and to the point about negative concerns, and always try to focus negative concerns toward your strengths and your positives.

10.) Momentum and Urgency: Investors are fickle creatures, they are motivated by fear and greed, and without it they will take their time and hem and haw at every turn. They will turn a 3 week process into a 6 month process. Time IS NOT YOUR FRIEND! The longer the process drags out, the more it seems that nobody is interested in your deal, and the less likely you are to actually get one… AND even if you do, with every day you will be sinking more time and energy into the process and less into your company. Every communication you have with prospective investors must include a sense of momentum and urgency in the deal process. “Things are moving quickly.” “My day is packed with meetings.” “Many parties are interested.” “This deal could come together quickly.” You back this up with hard work and serious hustle. Keep your update conversations short. Make the Urgency a reality by working your ass off. It will become a self-fufilling prophecy and your deal will get done.

11.) Getting the Lead: You can get all of the investors in the world amped on your deal, but until you have a lead, you don’t have a deal. What is a lead? The lead in a deal is the investor, usually one of the largest, who negotiates the T’s and C’s and essentially sets the terms for the round of funding… essentially providing you with a term sheet. The way to get a lead is to spur one of the larger, most interested investors into making an offer. Ask him what it’s going to take to make a deal happen, what kind of terms he had in mind, what would make this an exciting deal. You can make momentum moves with this request, by making it clear that you’re going to other investors and having the same conversation with them. Make it a matter of “shit or get off the pot” (but in a polite way).

12.) The Competitive Deal – The Need for Speed: The second you have a single term sheet, you need to move *very* quickly to get a second one. You don’t have a lot of time, because momentum at this point is crucial to closing and your first lead does not want to feel like he’s being dicked around. Your second term sheet will be easier to get than your first, but it will make a HUGE impact on your deal. Without a second termsheet, you will be in a position to take whatever crappy terms the original lead provided, and it’s quite possible that the terms could get worse (or even go away!) as the one-termsheet deal drags out. Figure out who those 2 or 3 potential other leads are and hustle the hell out of them. Here’s a voicemail I left on a 2nd termsheet prospect on a recent *competitive* deal I was involved in. The recipient of this voicemail called back in 5 minutes, AND ended up being the lead on the deal (notice the urgency while staying true and credible):

13.) Herding the cattle: Once you start working the competitive leads, you need to start getting word out to ALL of the interested parties, that this deal is getting hot, and that you could start moving to close in very short order. This is key to continue momentum with the deal and keep your potential leads hot. If they know you have $200-300k following their investment, then they feel even better about your company knowing all the other folks are interested too. This makes them anxious about the competitive situation you’ve created b/c now your deal has been validated. On the other side, the small investors that were interested in following, now feel that this is a real deal that they can really follow, and since there are big guys involved putting in real money, they’ll essentially commit to an amount w/o necessarily having all the final terms. Nail those follow-on investors to an amount. Make sure those competitive leads know that you’re bringing a lot of extra money to the table.

14.) Anti-Collusion: Once you lock on your lead investor, there are a lot of terms still left to fill out. The heavyweights in your deal will have the inclination to collude to make the terms better. They know they’re in the deal and the delays that happen when final docs are getting fully locked makes them rambunctious. Keep it short and sweet with each potential colluder, and draw a very straight firm line that the material terms are not changing. That kind of leadership will keep you from having what I call an investor revolt before you even get the deal done.

Travis Kalanick is a successful entrepreneur in the areas of consumer Internet, p2p, and enterprise content delivery. His most recent company, Red Swoosh, was sold for $19M to Akamai Technologies in April 2007 after receiving $1.7M in funding from August Capital, Mark Cuban, and Crosslink Capital. You can find Travis online at http://swooshing.wordpress.com and on Twitter at @konatbone.