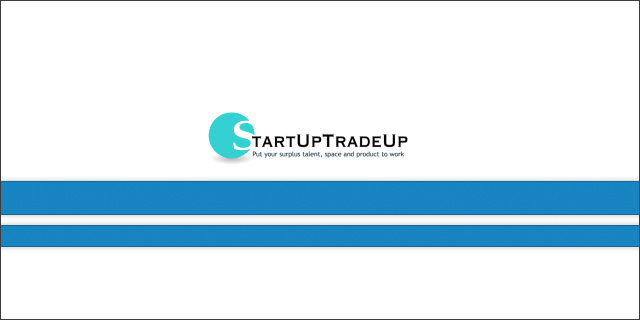 When it comes to startups, the opportunities are limitless…unless something actually costs, you know, money. Every startup out there is constantly on the search for money – whether that's through funding or bringing on clients – to fund even just their day-to-day operations. Often whatever additional funds are available will be used toward something essential that a startup has been eyeing for some time, but simply couldn't afford. What if you could trade one of the services that your startup already offers for a certain resource that it's in desperate need of? Well, StartUpTradeUp finally provides this kind of conduit for startups.

StartUpTradeUp is a platform that serves as an online marketplace for various businesses and startup companies, along with individual freelancers, to trade and barter their surplus skills, space, or products and services. It allows direction interaction between those with an excess of a specific commodity or service and those interested in the opportunity to trade their own excess of resources for something they are lacking.

Basically: I have plenty of chocolate cupcakes, but I'm low on milk; you have a lot of milk, but you've only got half a cupcake; I'll trade you some of my cupcakes for some of your milk (this example assumes that neither party is a greedy glutton). A better example: a developer is in need of office space for nine months; an architectural firm wants to redesign their site and has an empty office on premise but does not want the direct expense; the two companies can connect on StartUpTradeUp and agree to trade the open office for design services.

Jakub Antkiewicz is the founder of StartUpTradeUp, and he admits that he's been involved with startups since college, spending a lot of time between the Denver and Chicago ecosystems. “I would run into a lot of companies that were looking for capital or products [for which] they necessarily didn't have the money, whereas other companies [I ran into] had a lot of technology, space, and other resources that weren't being used. So, I wanted to put that surplus to use,” comments Antkiewicz on the motivation behind the startup.

Indeed, this issue of limited resources is something that's a given in the startup world. You need and want a workspace for your employees, but cannot necessarily afford most of the options out there. Or you'd like to bring on another developer to improve your app, but you're broke at the moment. In these cases, why not take advantage of the resources other companies have, especially when they're offering? I mean, sure, your own startup needs to offer something else in exchange, but it's definitely a financially cheaper option.

Keep in mind, StartUpTradeUp is a marketplace. That being so, companies and individuals on the site figure out the value of their services, products, or resources, on their own. How much is my/our time and services worth? How does that compare with the office space that this particular company is willing to trade us? In order for startups to actually benefit from StartUpTradeUp, they must put a lot of thought into whether the non-financial costs into such trades they hope to pursue are actually cheaper than the financial costs they would otherwise spend on those resources.

As of right now, StartUpTradeUp has about 200 business users and 800 individual freelancers signed on. The company is currently focused on growing its user base and improving the site experience.