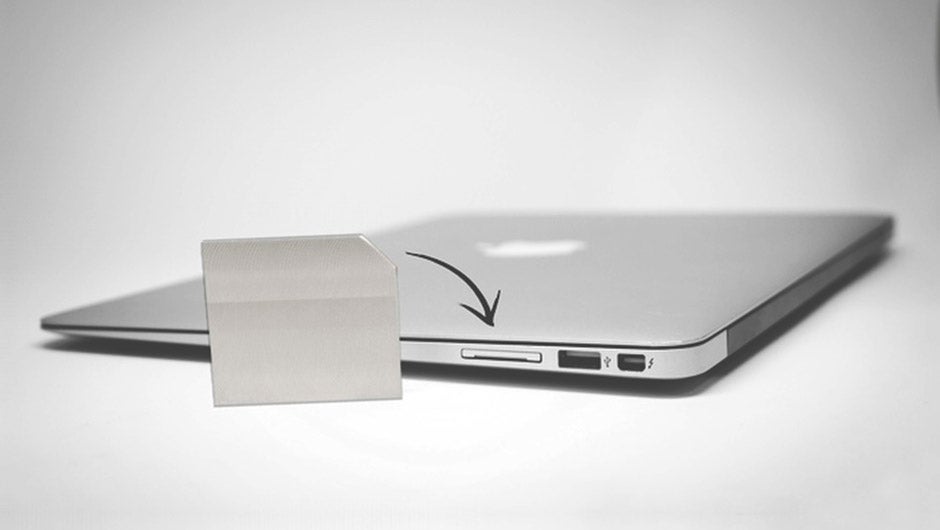 Sometimes 256 GB or 512 GB of hard drive space simply isn't enough. Despite our initial expectations for how much memory we'll need, human error persists – the extent of our predictions can only go so far. And, while external hard drives exist to help fix these technical limitations, their usage often poses more of a hassle than what's necessary; while portable, traditional external hard drives are often too bulky and require you to carry around this hand-sized object wherever you need that additional storage. Thankfully, if you're a MacBook owner, you can get your hands on a new, tiny storage expansion drive that's bigger on the inside.

The TarDisk – named after the signature TARDIS from Doctor Who –  is a new onboard storage device for the MacBook that is currently running a Kickstarter campaign to fund its manufacture. Custom-designed for your specific MacBook device, the TarDisk inserts easily into the MacBook's SD slot and automatically mounts into OSX as an available drive for you to use. Built for ultimate efficiency and longevity, the TarDisk offers 64 GB, 128 GB, or 256 GB of additional memory space in a small, 14mm chip.

“We chose [the name] TarDisk – well, I pushed for “TarDisk” because I am a huge Doctor Who fan – [but] we [kept] going back and forth on what [we would] name this thing. What is a good name for something bigger on the inside [and] smaller [on the] outside?” said TarDisk CTO Craig Leaf. “But TarDisk seemed [a] perfect fit…it’s so much smaller on the outside [and it] makes the MacBook bigger on the inside.”

According to Leaf, the TarDisk is an attempt to accomplish what Steve Jobs did for the MacBook Pro, but for a storage chip. Much like the MacBook – whose uni-body is carved from a single aluminum block with precision CNC lathes, each TarDisk storage chip is encased in its own aluminum uni-body. The storage module's unique chassis allows excess generated heat to dissipate, which makes the TarDisk built for ultimate stability and longevity. Because of the size and durability of the TarDisk, there's more flexibility in carrying it around than a traditional external hard drive – or not even have to carry it at all, since you can leave it plugged into your MacBook. By simply plugging in the TarDisk into your MacBook's SD slot (which you rarely use anyway), you gain upwards of an additional 256 GB of memory storage.

With 19 days left in its Kickstarter campaign, TarDisk has already managed to raise more than $67,000 – surpassing their initial goal of $32,500. Because of such success, they plan to announce stretch goals for TarDisk later today, including optional pre-installed Linux/Ubuntu OS (right on the TarDisk itself).