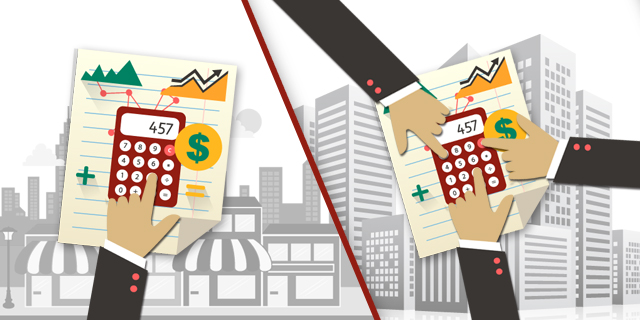 Most people are aware that businesses pay taxes differently than individuals. What you might not realize is that the differences don’t stop there. In fact, there are distinct differences in the way a small startup pays taxes versus a large corporation.

The Tax Differences between Startups and Large Corporations

The first thing you should understand is that the basic tax laws are the same for both large corporations and startups. What is different are the types of credits and incentives the companies have access to – all of which are based on profits. Small startups generally do not make the same level of profits as large corporations, and are therefore not usually eligible for these credits and incentives. However, that does not mean that small corporations are out of luck. Below is more information on how the size of a company, and its profits, influence taxes.

Ultimately, the more money a company makes, the better its tax rate.

Editor's note: We received this information from one of our dedicated readers, who would like to clear up any possible misunderstanding:

There is a common misunderstanding about how tax brackets work that is implied by some of this commentary: that a businesses entire profits are taxed at a single rate (34%, or 39%, or some other figure). This is emphasized in this sentence from the first paragraph: “So it’s to a small company’s advantage to make more than $335,000, or less than $100,000 in profits.” This $100,000 to $335,000 range that the writer referenced is the 39% bracket, and he has told the reader that companies should avoid this supposed danger zone.

The second paragraph make a similar assertion: that a company needs to stay below $50,000 in profits to retain a 15% tax rate. The implication in the wording here is that as soon as a business bumps up to $50,001 in profits, their profits are then taxed at 25%. Thankfully, this is not how tax brackets work.

Each tax bracket represents the rate at which that particular range of profits is taxed. So, for example, only the profit in between $100,00 and $335,000 is taxed at 39%. Every dollar of profit less than $100,000 is taxed at a lower rate. The table on the website that the article linked to actually displays this reasonably well:
Taxable income over Not over Tax rate

As a result, businesses need not fear that jumping from one tax bracket to another will impact their entire profit. Everybody wins.”

The above input was received by Mike Pesch. Thanks, Mike!

One good example of this is Mitt Romney who made an estimated $21,000,000, which should have put him at approximately 35%, but after credits and incentives only paid taxes at an effective tax rate of 13.9 to 14 percent.

Unfortunately, many of these credits and incentives that the larger corporations use to lower their taxes are simply not available to small companies and startups.

That’s because many of these corporate tax loopholes require a company to spend a lot of money to qualify. For example, The IRS does not tax money earned in foreign countries, additionally, many foreign countries have very low corporate tax rates as compared to the United States. This means that large corporations like Google and Amazon, can move substantial parts of their operations abroad, pay much less in taxes than the 35 percent they would pay here, and, even if that money ends up in United States Bank accounts, not have to pay any taxes on those profits here. In fact, Burger King made the news earlier in 2014 when it contemplated moving its headquarters to Canada to avoid paying United States taxes.

Small companies and startups often don’t have the revenue to set up operations in foreign countries, at least not at a scale large enough to produce the kinds of profits they need to make it worthwhile.

Another issue is that large corporations can take greater deductions on business expenses, including things like executive stock options, private jets, and corporate sponsorships, because they have the financial resources to do so. A company like Papa John’s can spend millions of dollars to be the official sponsor of the Super Bowl, and hire old sports legends to appear in prime-time national commercials, and give away thousands of free pizzas, and then write it all off as a business expense to the tune of millions. A Mom-and-Pop pizza shop just doesn’t have the same resources to do that.

It may appear that small companies and startups don’t stand a chance when it comes to taxes. In fact, although a large number of corporate tax breaks tend to benefit the large wealthy corporations, smaller companies do have options.

The best course of action is to consult with a professional for tax tips, including information on the type of tax structure to use and the types of breaks available to small business, such as the Small Business Health Care Credit.

There are also organizations like Americans for Tax Fairness and Citizens for Tax Justice that are working for more equitable tax laws and codes that will close the large corporate tax loopholes, and level the financial playing field for small companies and startups.

Santosh Satya is the Head of Content Development for KM Media. His idea focuses on positive stories and viral news. Over the last 5 years he has served in various social media agencies helping various brands to accomplish their goals.