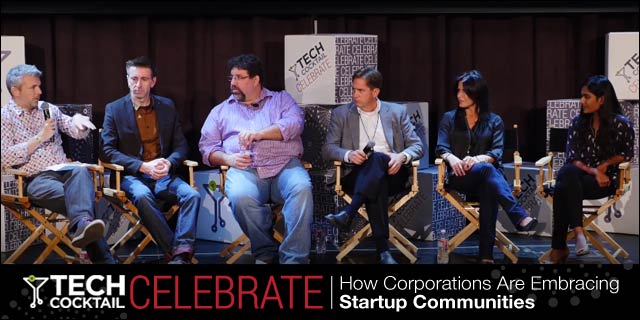 At this year's Tech Cocktail Celebrate Conference, there was a lot of focus on how public and private entities can support the development of startup communities. In one particular panel, titled “Corporations Embracing Startup Communities,” representatives from leading corporations discussed the various ways through which large companies are working with and alongside startups to develop today's innovative tech solutions. Besides advising startups to be more picky when choosing corporate partners, panelists reminded founders that they shouldn't have to sacrifice their startup vision when working with a larger entity.

“Don't get caught in the trap of trying to please the behemoth [corporation],” said Lewis. “They have their plans – their revenue plans, their marketing plans…they're there to make sure that their cash cows are moving forward. And there are plenty of behemoths that will consume your startup and take it in the wrong direction because they're not concerned about you succeeding; they're concerned about their ownership of the IP, their ownership of the space…[but] don't lose focus on what you got into the business for – if it's a viable idea and people are investing in you and people are invested, [then] stick with it.”

It's one of the major pitfalls that startups have a tendency to to run into, according to the panelists. There's this misperception that startups always have to please the corporation with which they decide to partner; however, panelists argue that if you've got a startup with an idea that's already attracting attention and interest from other parties, there's no need for you to completely change the vision of your startup or product to fit in with the goals of the larger corporation. And, oftentimes, startups are faced with opposing directives from multiple large entities; the safe bet, in these cases, is to believe in your initial vision.

Listen to what else the panelist had to say during the panel on “Corporations Embracing Startup Communities”. Here's the video: