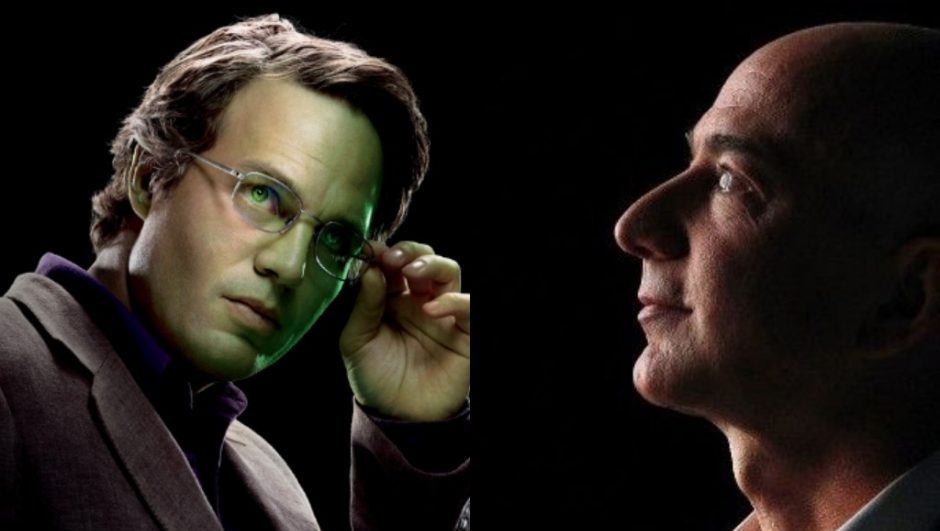 Marvel's highly anticipated Avengers: Infinity War debuted last night to rave reviews. Tragically, in the real world, superheroes don’t exist. That is, of course, unless you look to the tech industry.

From Elon Musk to Jeff Bezos, tech entrepreneurs have championed innovations that are a lot more world-changing than mere super powers. Whether it's self-driving cars, one-hour drone deliveries, or commercial space travel, these heroic titans of business have made the world a little more super.

So, which one of your favorite tech entrepreneurs would you assemble for an ambitious crossover event of their own? Let's take a look: 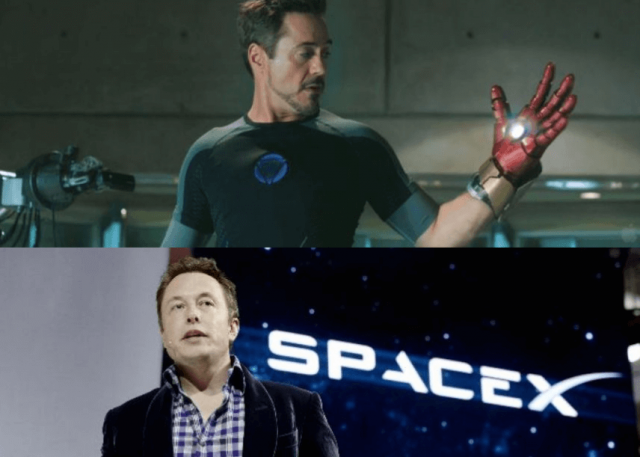 This comparison has been made more times than we can count, and for good reason. In addition to being Robert Downey Jr's inspiration for the genius, billionaire, playboy philanthropist Tony Stark, Musk has shown time and time again that developing world-saving technology is what he's best at. And he's not stopping any time soon.

Between Musk's self-landing rockets, sustainable automobiles, and traffic-alleviating boring machines, this real world Iron Man makes innovation seem like a mission from Nick Fury. And, let's be honest, if you found out that Musk was building a metal suit to fight crime, you'd hardly be surprised. 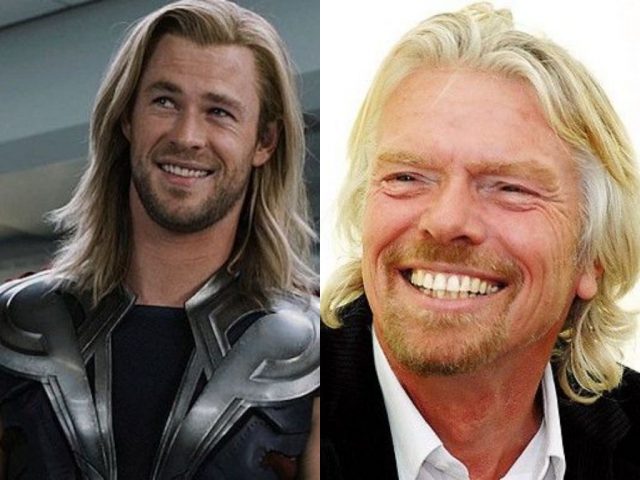 Aside from maybe bicep measurements, Richard Branson perfectly embodies the God of Thunder. From his shimmering golden hair to his cosmic aspirations, Branson being from another dimension is certainly a possibility.

Branson's company, the Virgin Group, not only controls an entire galaxy of businesses, but one of them is Virgin Galactic. This commercial spaceflight business is hoping to send everyday people to space. And if we've learned anything from recent Thor films, it's that traveling the cosmos is the Norse god's bread and butter. Branson even had his own personal Ragnarok, when his private island paradise home burned to cinders in 2011. 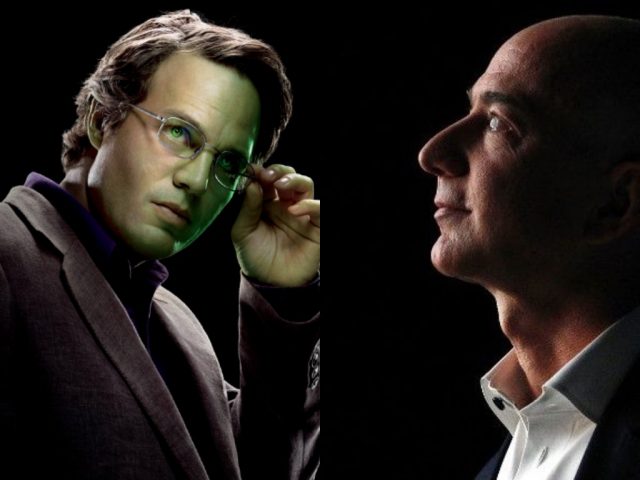 It isn't easy being the founder, chairman, and CEO of Amazon. It's also not easy being a gamma-radiated scientist that turns into a gigantic green rage monster every time he stubs his toe.

Either way, the undeniable genius of Jeff Bezos and Bruce Banner proves that they have a lot in common, even beyond their well-documented anger issues. Genius one moment, raging giant the next – you'd want either version of Bezos on your team, not the other side. 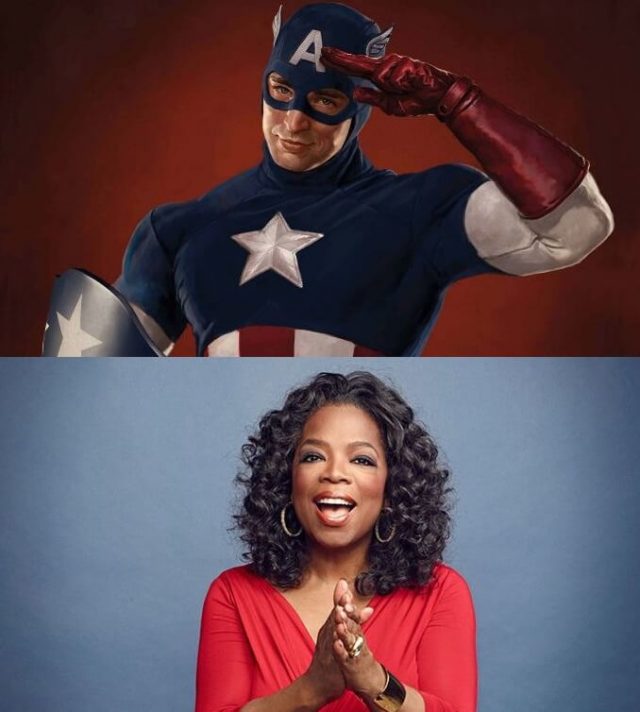 As one of the most established entrepreneurs on the list, Oprah Winfrey embodies the old school grit of Captain America. Sure, she wouldn't be considered a tech entrepreneur first and foremost, but her Favorite Things have made her a tech trendsetter on par with few in the industry. In 2017, she gave her thumbs-up to the Amazon Echo Show, and there's not a tech company in town who'd shun her endorsement.

Plus, as news outlets and social media posts implored a few months ago, Oprah is the American hero many could see taking up the mantle of president. And with her work ethic, you know that she could do this all day. 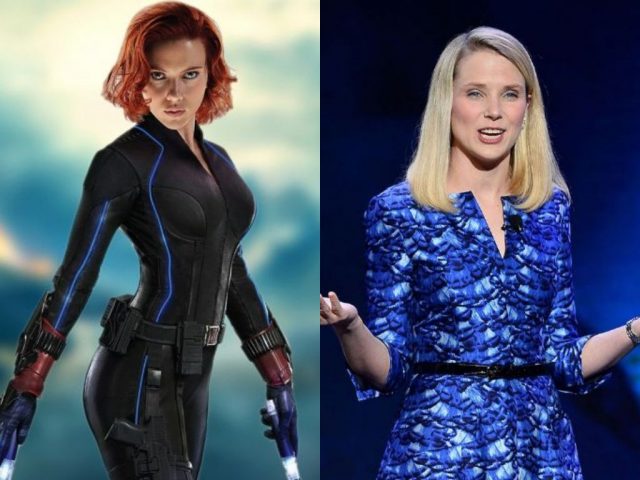 Whether you work for Google and transfer to Yahoo!, or act as a spy for the KGB and defect to the USA, you're going to be viewed as adaptable and able to roll with the punches.

Fortunately for Marissa Mayer, the former Yahoo! president and CEO, the tech industry is full of second chances, something Black Widow has taken advantage of more than once. 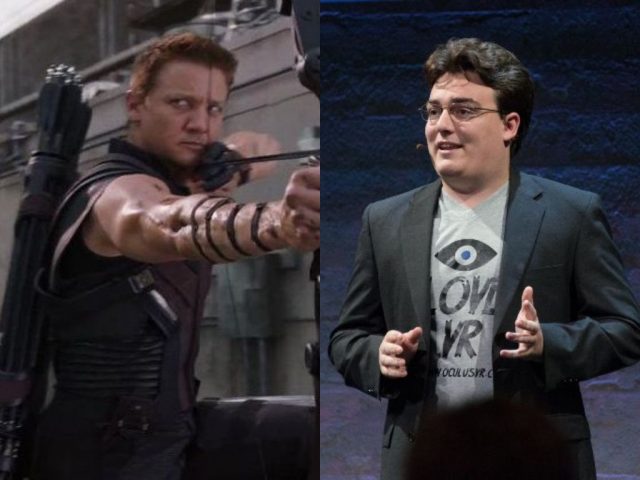 Much like Hawkeye's bow and arrow, Palmer Luckey wowed the tech world with his impressive Oculus virtual reality set up. Unfortunately, just like the bow and arrow, the VR tech hasn't found its mainstream footing in the ever-evolving tech space.

To make matters worse, Luckey has failed to live up to his name, with his much-publicized ousting from Oculus shortly after it was acquired by Facebook. Still, Luckey insists it's an early retirement – something that Hawkeye himself is more than familiar with. 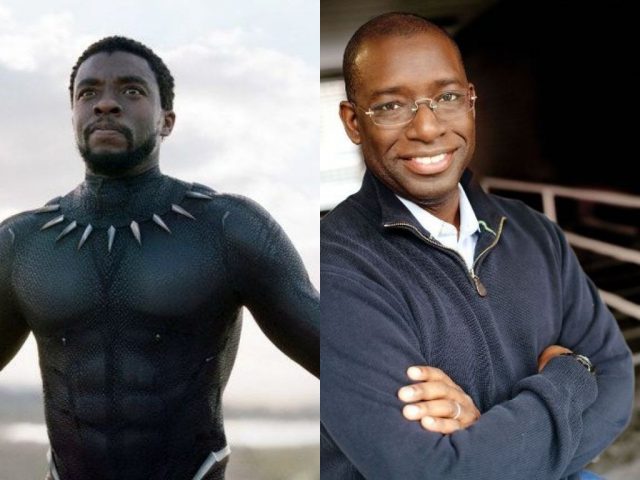 As far as championing diversity goes, something Black Panther has become famous for, Spikes is also the founder of the Urbanworld Film Festival in New York, which has given a wide range of diverse filmmakers the chance to showcase their talents for a global audience since 1997.

The Guardians of the Galaxy – The Shark Tank panel 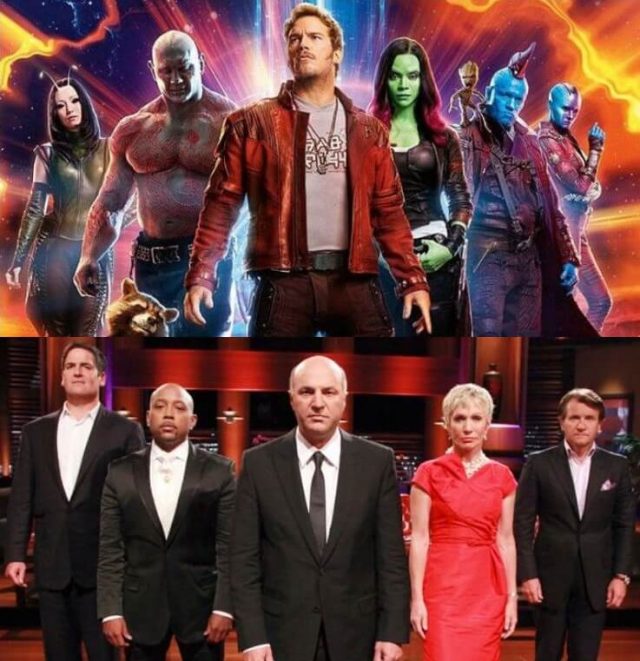 Superheroes team up all the time. But in the tech industry, large groups of entrepreneurs rarely join forces to fight the innovation battles none of them could win alone. Fortunately, TV shows bring people together more than anything, and Shark Tank is no different. It's created a super group of investors and entrepreneurs that could rival the Guardians of the Galaxy any day of the week.

Mark Cuban, Daymond John, Barbara Corcoran, Kevin O'Leary, Lori Greiner, and Robert Herjavec form the Shark Tank panel, and they've spurred more tech innovations than you can count. From student loan payment apps to smart stoves, these guardians of the industry may bicker and disagree, but they've made a bigger impact on the startup tech industry than anyone could've ever hoped. 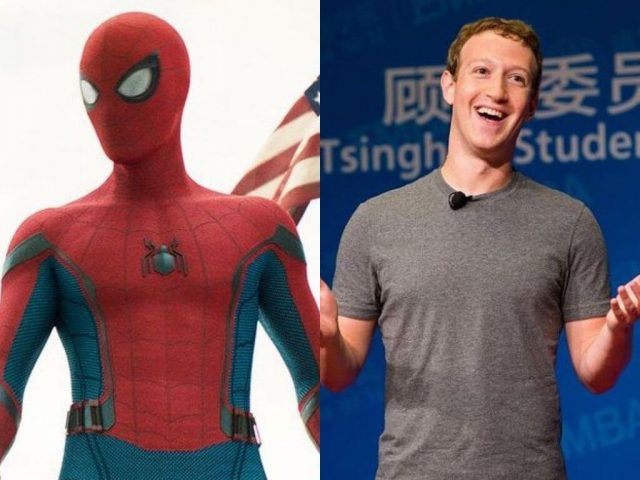 As two of the youngest and best-known names on this list, Zuckerberg and Peter Parker share a great deal of similarities, other than being pretty uncool in the eyes of teenagers.

From their pension for playful banter to their technological smarts, these two young guns have shown the comic and tech world that youth can trump experience in certain situations. Still, Zuckerberg could take a page out of Spiderman's book, by remembering that with great social media power comes great responsibility. 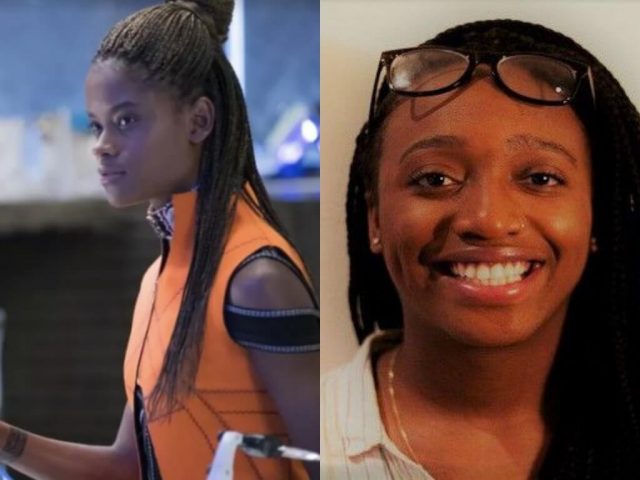 Being the breakout star of one of the biggest movies of the year is one thing. But even Shuri would be impressed by a 21-year-old entrepreneur who turned $8,000 of her own money into a multi-million dollar business. After Makaela Richardson's success, being the leading scientist in Wakanda hardly seems like enough anymore.

Richardson's company, Free the Fresher, is a subscription box service that delivers university necessities such as kitchenwares, bedding, stationery, and even “hangover kits,” to students for a yearly fee. In the first two months alone, 3,000 students signed up, with investors lining up around the block to get in on the action. And if that level of resourcefulness doesn't remind you of Shuri, we don't know what will. 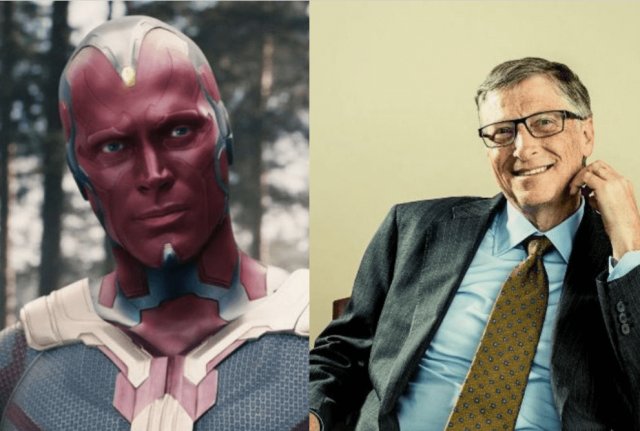 Like Vision, Bill Gates and his wife have shown that acting for the greater good can do a lot to change the world for the better. The Gates Foundation has become the gold standard for charity, which would make Vision plenty proud.

However, also like Vision, Gates seems to struggle when relating to his fellow man's needs, considering the many “Re-Visions” to Windows 10 and the failure of Windows Phone. If you can't build a smartphone as the leader of one of the largest tech companies in the world, it might seem like you're missing the human touch. 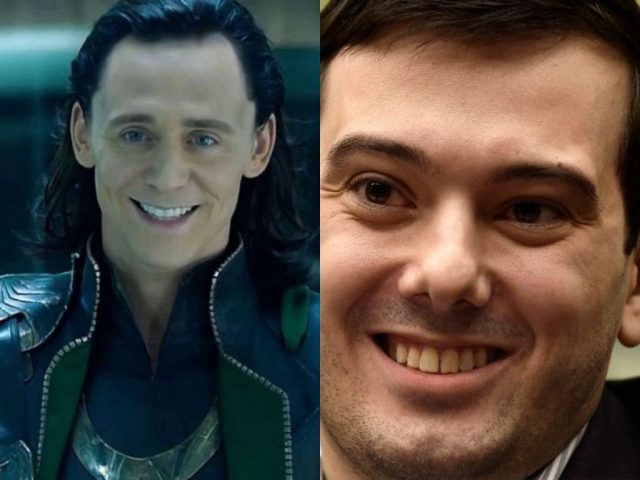 This one is just a little too easy. Loki and Shkreli (they even sound the same) have done a great job of reminding the world about the dangers of greed. At seemingly every turn, these two will abandon their morals in pursuit of personal gains.

However, their decidedly evil attitudes often backfire in the form of legal trouble, or a firm beating from the Hulk. But, with mischievous pasts like these, who knows what will stick and what won't. 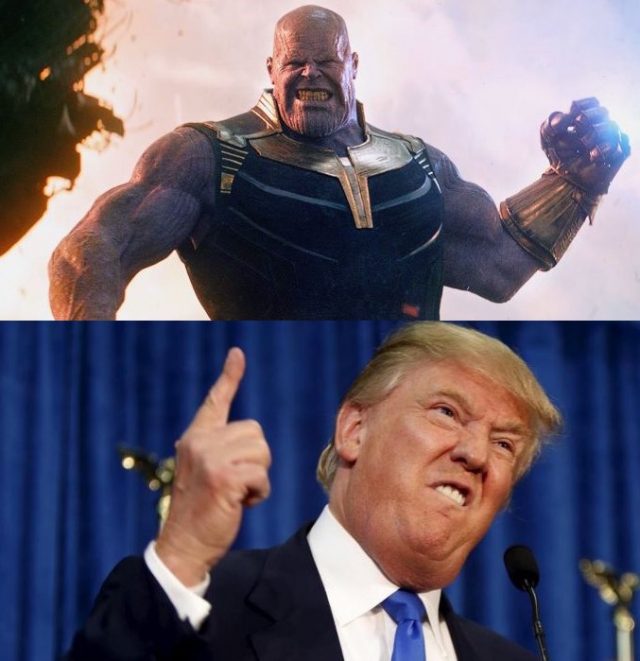 From a tech industry standpoint, it's hard to deny that Trump plays the role of the villain. Whether it's denting Amazon's stock by attacking it on Twitter, or receiving criticism from pretty much every founder in Silicon Valley for countless policy decisions, the President has been at odds with the tech industry since taking office. This is also evident from the many exits from his advisory councils, one of which was Disney's Bob Iger – a man betting big on the Avengers this year.

Thanos and Trump even share a certain style – a left handed glove (one for golf, one for destroying half the universe), a weird headpiece, and an unusual skin color. And whether it's an ambitious comic movie crossover event, or a reality TV star in the White House, you can be sure that ten years ago, no one saw either coming.