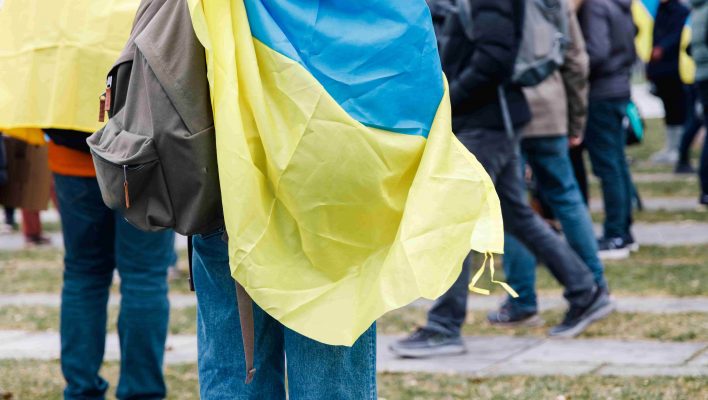 Russia invaded Ukrainian territory on February 24, and since then, tech companies inside and outside Ukraine have been working out how to respond to the unprovoked military aggression.

Big Tech companies like Facebook, Google, and Microsoft have been involved in trying to stem the flow of disinformation, making sure Russian media aren't making money from YouTube adverts, and ensuring the Ukrainian government has the best chance of defending itself against cyberattacks respectively.

Tech companies operating inside Ukraine, on the other hand, have had to make difficult decisions regarding their continuing operations.

Meta announced on Sunday that it is taking down a disinformation network operating on Facebook and Instagram that was being used to spread disinformation to Ukrainian civilians.

Russia’s military doctrine of “Maskirovka”- altering the perception of reality in enemy ranks in order to foster confusion – is clearly being implemented across social media.

The company said the network was running websites masquerading as independent news pages. It had also made fake accounts across a number of social media platforms including Facebook, Instagram, Twitter, YouTube, Telegram as well as Russian sites Odnoklassniki and VK.

“We took down this operation, blocked their domains from being shared on our platform, and shared information with other tech platforms, researchers, and governments” – Nathaniel Gleicher (Head of Security Policy) & David Agranovich (Head of Threat Disruption)

Meta officials also said they’ve detected activity by Ghostwriter, a threat actor that has been asking Facebook users to post YouTube videos of Ukrainians surrendering to Russian troops and steering Ukrainians towards phishing domains to steal their credentials.

Meta said Facebook had “taken steps to secure accounts that we believe were targeted by this threat actor and, when we can, to alert the users that they had been targeted”.

However, Facebook has come under fire for its response, with many claiming the platform isn't doing enough. Meta promised to label state-backed media in light of the disinformation around the 2020 US elections, but a recent study found that, during this content, the site was failing to label 91% of Russian propaganda.

Microsoft Working with Ukraine on Cyber-Defence

Microsoft has been working closely with Ukraine’s authorities to detect and prevent cyberattacks.

In a lengthy blog post detailing the action they’ve taken, Microsoft said that “in this instance, our efforts have involved constant and close coordination with the Ukrainian government, as well as with the European Union, European nations, the U.S. government, NATO, and the United Nations.”

Just before the conflict began to rage on the ground, Microsoft’s Threat Intelligence Center (MSTIC) “detected a new round of offensive and destructive cyberattacks”, which included identifying a new malware package (called FoxBlade) and taking steps to prevent it from achieving its purpose.

The company has also banned state broadcaster Russia Today from the Windows App store, becoming the latest in a long line of media entities doing the same.

Google took steps to ensure that its mapping technology was not being used to track movements of Ukrainian and Russian troops – albeit only after users took to Twitter to show how they were able to track the invasion of Ukraine through Google Maps.

Google creates maps that show traffic density based on location and speed information extracted from the Google Maps app. The company said it was disabling the tools it uses to do this for the safety of local Ukrainian communities. But this might not deter everyone from amateur detective work.

“There's a bit of a game out there now, to geolocate things as quickly as possible and identify those locations. That's a big concern at the moment” – Benjamin Strick, director of investigations for the Centre for Information Resilience.

Twitter didn’t start the crisis well, and faced backlash last week after it mistakenly banned accounts providing vital open-source updates on the Russian invasion of Ukraine, which it blamed on “human error”.

“We’ve been proactively monitoring for emerging narratives that are violative of our policies and, in this instance, we took enforcement action on a number of accounts in error… we’re expeditiously reviewing these actions and have already proactively reinstated access to a number of affected accounts” – Trenton Kennedy, Twitter spokesperson.

Twitter has made efforts to take down as much fake news footage from its platform as possible, but with real footage also flooding social media channels, governments engaging in propaganda campaigns, and the recent fighting between the two countries in the Crimea region of Ukraine (now occupied by Russia) to draw upon, the social media channel has its work cut out.

It is, however, labeling all Russian-back media and, according to CNN, “will demote that content algorithmically, the company said, as tech platforms have come under greater pressure to respond to Russia’s invasion of Ukraine.”

How are Ukrainian Tech Companies Responding to the Crisis?

Ukraine has a thriving tech sector – one-fifth of Fortune 500 companies outsource at least some of their IT operations to companies based in Ukraine.

Reporting from TechCrunch, however, suggests a broad range of responses. Some companies are evacuating staff, whilst others – such as PDF and productivity tool company Readdle – are continuing operations in the country.

“We’ve made business continuity plans a while ago and [are] executing them now,” Managing Director Denys Zhadanov said. “All Readdle products and services at Readdle are up and running, and there’s no evacuation for the team [being undertaken] at this point.”

“We’re not going to flee and run away… we are committed to Ukraine” – Andy Kurtzig, Readdle CEO.

Others are showing similar resolve. JustAnswer – a site that connects people with questions to verified experts who can answer them – has vowed to stay in the country.

“Lots of companies are pulling out of Ukraine and fleeing Ukraine because of all this, and that’s exactly what Putin wants,” JustAnswer CEO Andy Kurtzig told Protocol. “We’re not going to flee and run away. Their job is safe and secure. We are committed to Ukraine.”

Grammarly – which has offices in Ukraine and the United States – was also well prepared for this sort of disruption, and keeping data on servers exclusively in the United States has allowed staff to spend more time looking after themselves.

“Ukraine-based team members can focus on the immediate safety of themselves and their families” – Grammarly Spokeperson.

A company spokesperson said staff were “securing backup communication methods and temporary transfer of business-critical responsibilities to team members outside of Ukraine,”  which will ensure that “Ukraine-based team members can focus on the immediate safety of themselves and their families”.

Countries with a presence in Ukraine – especially ones that deal with sensitive data about customers and clients – have been forced to consider moving their systems out of the country. Cloudflare inc., a US web infrastructure company, said that it was removing all of its “customer cryptographic material from servers in Ukraine” but will stay operational for Ukrainians.

What Other Companies have Taken a Stand?

Elon Musk made the headlines over the weekend after he answered the call of Ukraine’s First Vice Prime Minister and Minister of Digital Transformation Mykhailo Fedorov, who asked Musk on Twitter to use his broadband satellite network, StarLink, to keep Ukrainians online in the event that Russia destroys their fiber-optic broadband infrastructure.

It's not just companies in the technology industry that have big decisions to make regarding their relationship with Russia – companies from all sectors are now deciding what sort of stance to take. Walt Disney, for instance, is pausing the release of all theatrical films in Russia.

Airbnb, on the other hand, is lending a hand with the impending refugee crisis as millions flee Ukraine – the company has said that it will provide free, short-term housing for 100,000 people. This will be paid for in part by the company and partly through donations.

Etsy is canceling all outstanding balances owed by sellers based in Ukraine, including transaction, advertising, and listing fees. This amounts to a total of $4 million. Verizon also waived fees, including all residential and mobile call fees to and from Ukraine until March 10, and will not collect voice and text roaming charges that would usually be incurred by those making calls in the country.

Ukraine: the Cyberattacks Will Continue

Disinformation and cyberattacks will continue to cause Ukrainian citizens problems on social media and other digital spaces – however hard Big Tech companies try to stamp it out.

It's entirely possible that the onslaught of cyberattacks will spill over into neighboring countries, as well as countries like the USA and UK. The prospect of an out-and-out global cyberwar looms large. This means it's never been more important to equip your business – and your family – with the security tools you need to keep your data safe, such as password managers.

It's also a good idea to keep up to date with the latest news regarding the invasion, and how tech companies are responding to it – it's likely Meta and Co. will come under increasing pressure to do more to combat the avalanche of misinformation being published by Kremlin-back individuals and entities.