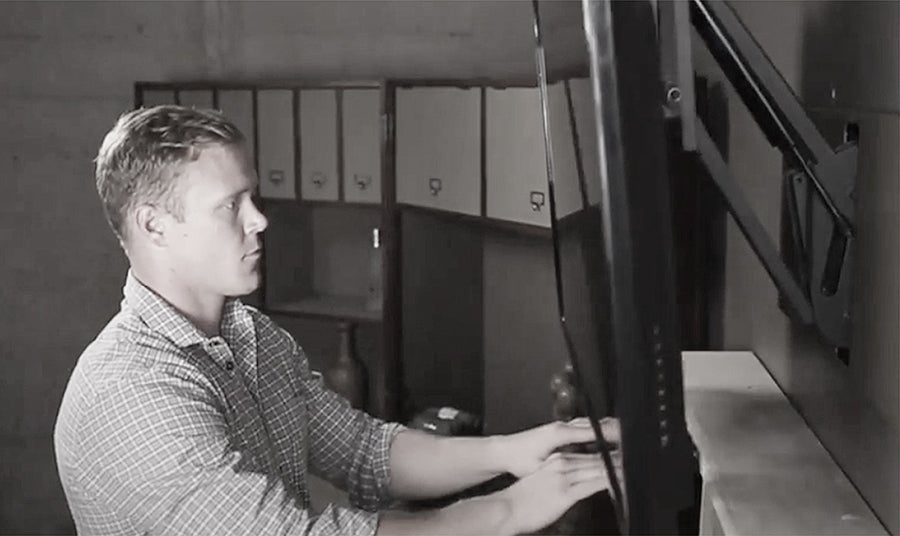 People worldwide love their television sets, and Americans are definitely no exception. In fact, the latest research indicates that 116.3 million of the 123.2 million U.S. households contain at least one TV. With this in mind, many tech companies and startups have made it their primary business to improve the home entertainment experience. During the past few years, we have seen 3D TVs and 4K Ultra High-Def TVs enter the marketplace. With this in mind, startup company MantelMount decided to fill a void within the TV industry: an easy to swivel mount that also contains heat sensing technology.

Just like many other technology based startup companies, MantelMount launched the initial production run of their product with the help of a Kickstarter campaign. This successful fundraiser accumulated more than $120,000 from 425 donors, and the first batch of MantelMounts was shipped in October 2014. Since that time, this product has repeatedly sold out via the company’s website. There is currently a presale list for consumers who are interested in getting a MantelMount from the June production order.

What Exactly Does the MantelMount Do?

The MantelMount is designed to be positioned above a fireplace. This product has a swivel design, and consumers can pull their flat screen TV away from the wall and reposition it at their eye level. In other words, if the TV is mounted too high, it can be pulled down over the fireplace, and it can also swivel to the right or left based on where the viewer will be sitting. All of this is accomplished via automotive pistons, so users do not need to bear any of the weight of their TV while they are adjusting its position.

Having an elegant looking lobby and office can be a major component of capturing the attention of current and potential investors. Due to this, it is not unusual for an entrepreneur’s office to have extra touches such as a fireplace. Gaining the ability to mount a flat screen TV over this space will save a lot of space, and the swivel option would make it easier to participate in video conference calls.

The previously mentioned heat sensing technology is an important factor of the MantelMount design. After all, if a TV becomes overheated from the fireplace, it could end up damaging the screen and internal electronics. Additionally, touching the MantelMount’s handles to put the TV back in place could be very dangerous if a consumer is watching television at the same time that their fireplace is operational.

To work around these issues, the startup company added heat-sensing handles to their design. If the temperature ever gets warmer than 110 degrees Fahrenheit, these handles will turn red to help protect the TV. This type of technology could potentially have several other future applications that could take the inventors behind MantelMount into a variety of different directions and industries.

Explore More See all news
We use cookies. By browsing our site you agree to our use of cookies.