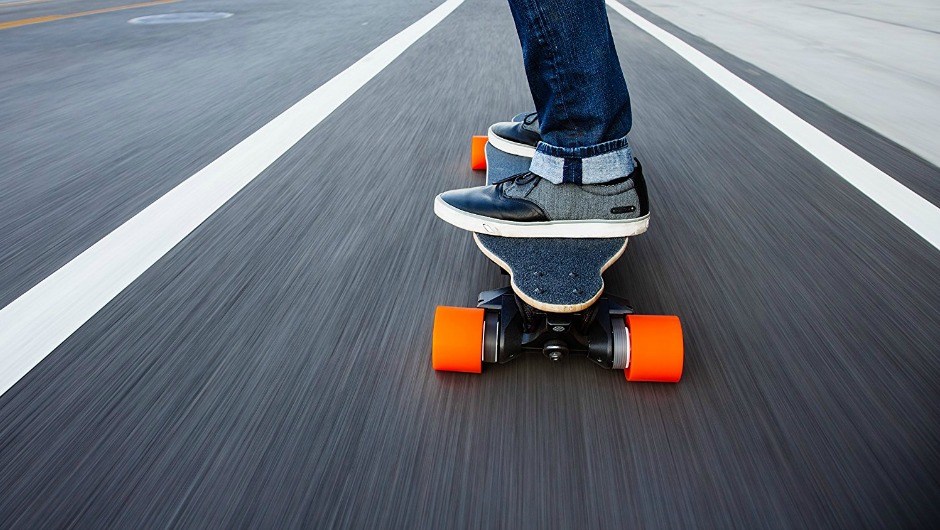 Two years ago, the world was taken by an explosive storm when hoverboards (segways without the sticks) hit the market. A few blown up batteries later and the consumer world had a sense of trepidation or these innovative devices, but that didn’t stop other brands from coming out with their own renditions of e-rides. From single-wheeled balanced rides to the standard electric bike, more and more devices are coming out to get people moving.

Here are twelve e-rides, including one very awesome motorcycle, that will get you from point A to B, the cooler to the beach, and even the hispter to the cold brew tap. 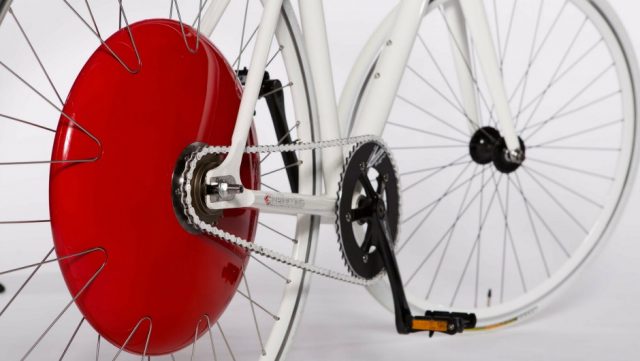 Perhaps one of the most anticipated pieces of tech for cyclists is Superpedestrian’s Copenhagen Wheel. First announced in December 2009, MIT’s Senseable City Lab began teasing a back wheel with a built in motor that could be added on to most bicycles. Unlike most e-bikes, this particular device enhances your ride, rather than fully motorizes it.

With a top speed of 20 mph, a range of 30 miles, built in data tracking and control through an app, the Copenhagen wheel 10xs your pedal power. Our full review is coming soon, but so far it’s incredibly fun. The wheel starts at $1500 (requires a metal frame) or you can buy a bike with it pre-installed for $2000. 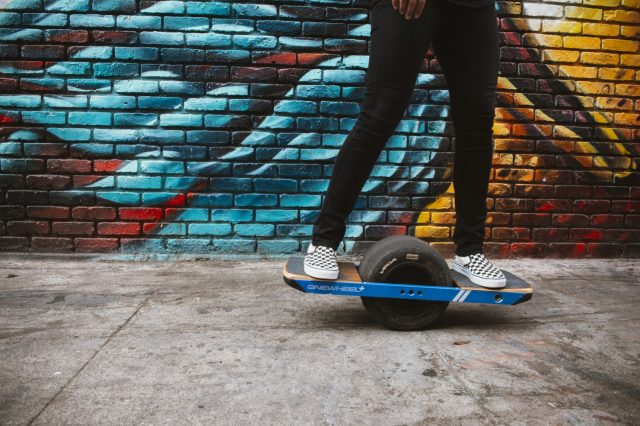 The original Onewheel was released right around the time when hoverboards made a bang in the marketplace, but offered a more adventurous experience. Besides the fact that these can actually go over a slight bump in the road without bucking you off, it’s designed to be ridden more like a skateboard instead of moving lazy people.

Coming in July of this year, the new Onewheel+ has a top speed of 19 mph and a range of 5-7 miles. What really sets it apart is the new fast charger that will give it a full battery in 20 minutes. The Onewheel+ is priced at $1500. 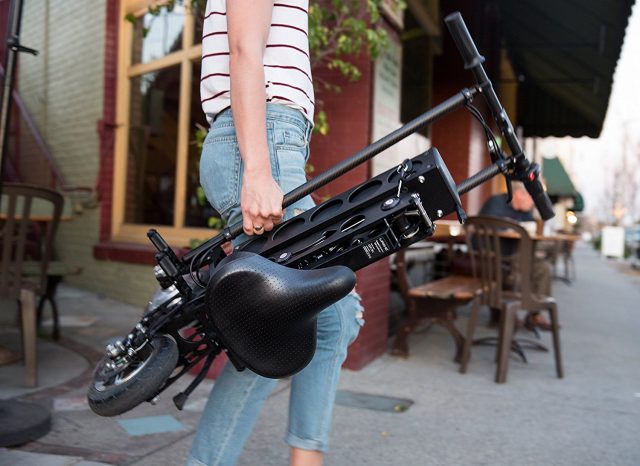 Looking for something lightweight and portable? American made Urb-E is a folding scooter with a 20 mile range. Unlike most electric scooters, this has a ride-on design and boasts speeds of up to 15 mph.

The URB-E can even charge your phone or other device through a builtin USB port. This one is a bit pricey for what it is, coming in at just under $1700. 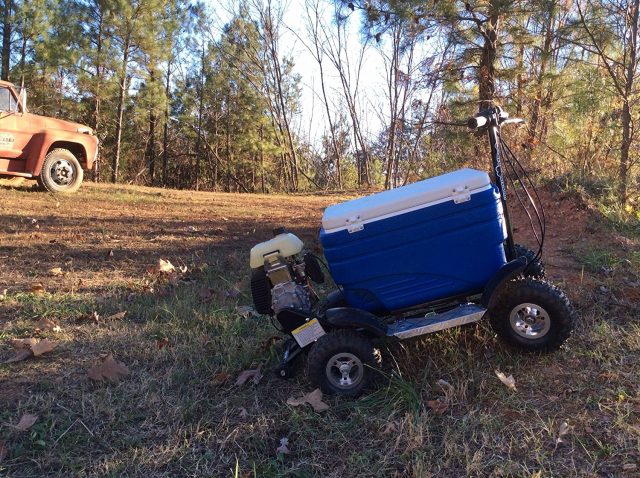 Fancy yourself a bit of a tailgater? Maybe you’re not a fan of lugging a heavy cooler across a hot sandy beach. Regardless of why, the Crazy Cooler converts your standard cooler into a gas powered, ride on scooter.

At just over $900, this thing has a 49cc engine with two horsepower, disc brakes, and all terrain wheels. Now that is one crazy cooler. 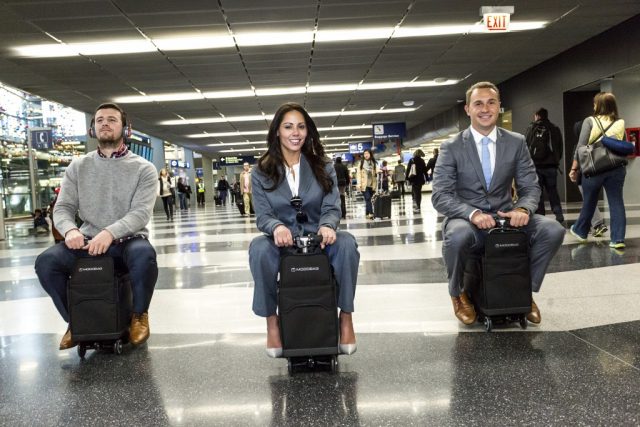 Everyone hates being late for a flight, and there is nothing like having to dodge in and out of slow walkers when trying to get to your terminal. Sure, you can strongarm people to get them out of the way, or you can simply add a bit of speed into the mix. The modobag turns your standard carry-on into a rideable scooter.

With a top speed of 8mph and a range of 8 miles, you can easily plow through people in style. Starting at about $1100, the Modobag was funded through an Indiegogo campaign and is set to start shipping in the next couple of months. 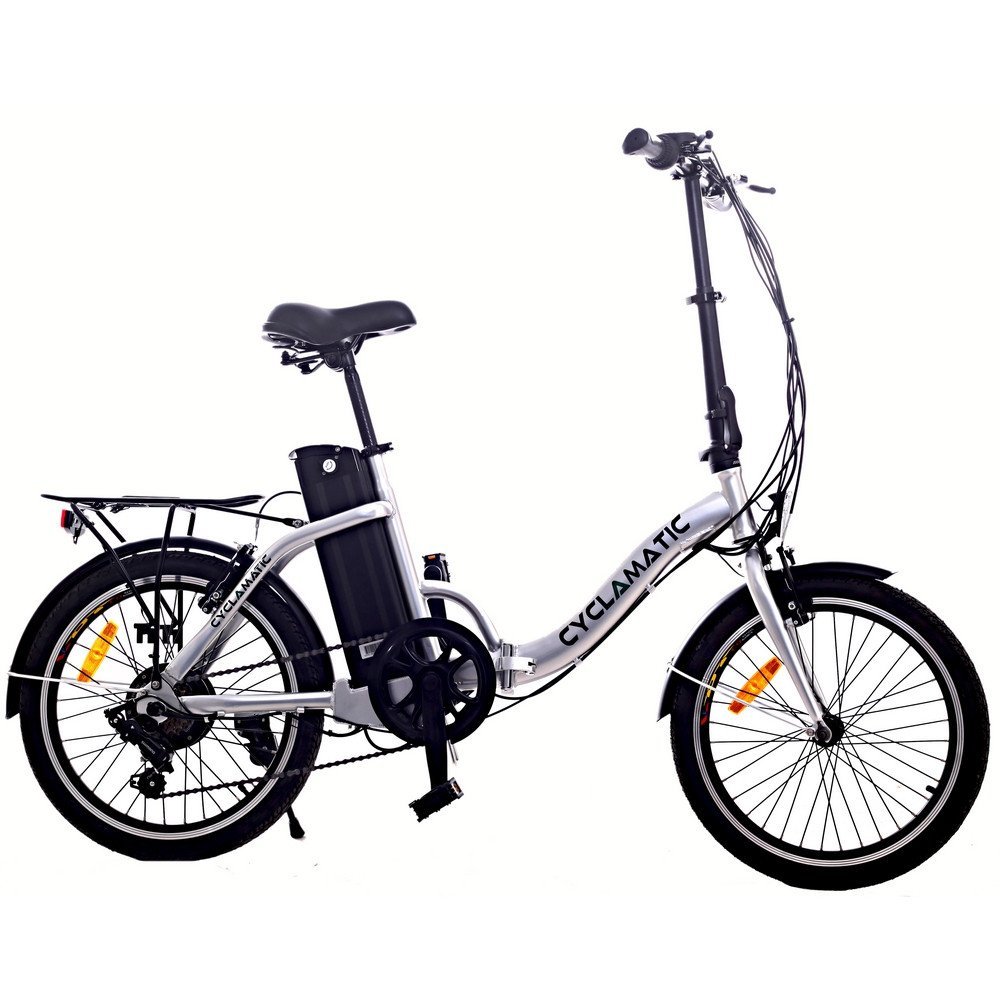 Folding bikes aren’t just for sailors, these little motorized bikes are also perfect for commuters. Coming in all different shapes and sizes, electric bikes like the Cyclamatic CX2 make it easy to go from train or bus commute to the front door of your office. 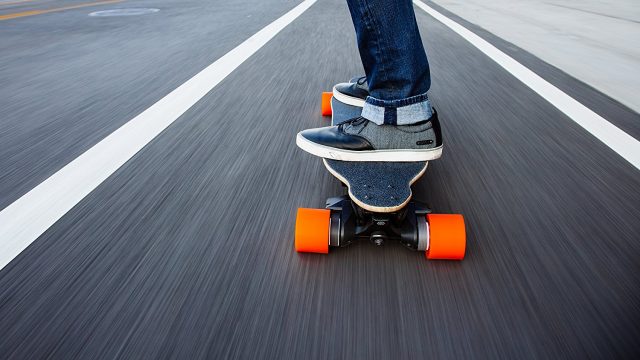 Perhaps one of the most in-demand e-rides this year has been the electric skateboard. Either controlled like a hoveboard or through a controller, these come in a wide range of price point and capabilities.

Boosted’s electric skateboard start around $1300, have a top speed of 20 mph and a range of 7 miles. 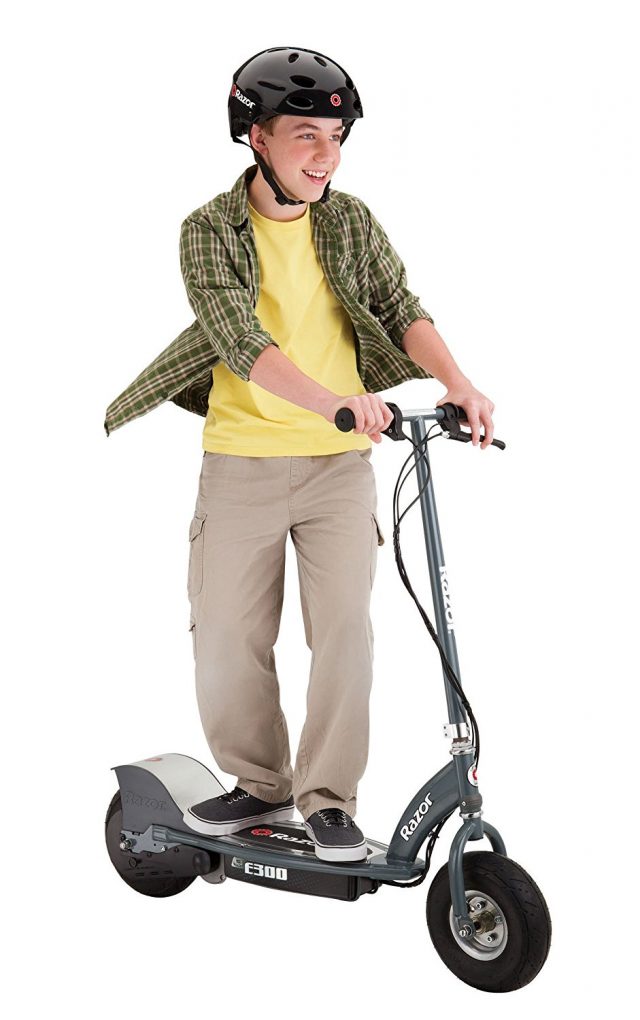 In the 90s the razor scooter had a strange comeback, and even to this day they still have a strong market presence. What are typically noted to be for kids, they too have an electric version.

Priced at $200, this little fold up scooter has a top speed of 15 mph and a range of about 40 minutes of continuous use. 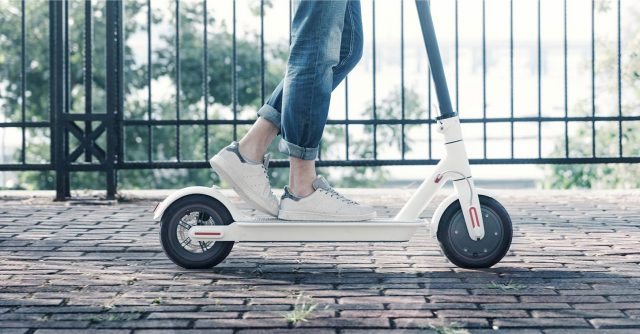 Have you ever seen early 2010 startups and their included hipsters riding around on electric scooters? The Xiaomi M365 is one of the many versions electric scooters that look similar to the standard razor, but support the weight of an adult (or hipster). 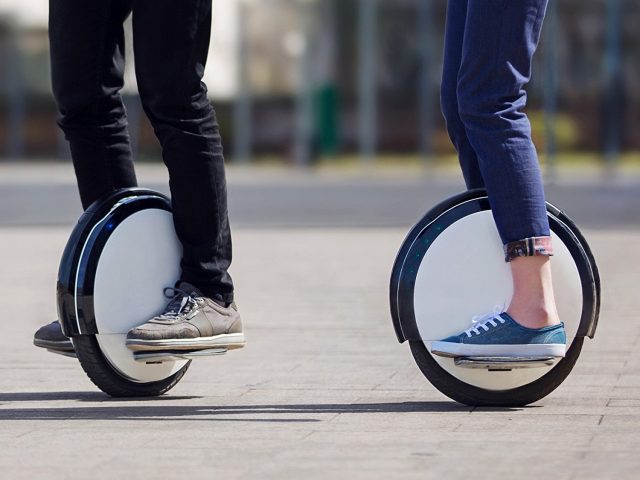 Most known of Segway for either those ridiculous tours that roam through your city, or simply due to the fact that they were once the most popular e-ride around. In competition with the rise in hoverboards, Segway released the One S1 that allowed riders to balance on a unicycle style system while keeping their hands free. 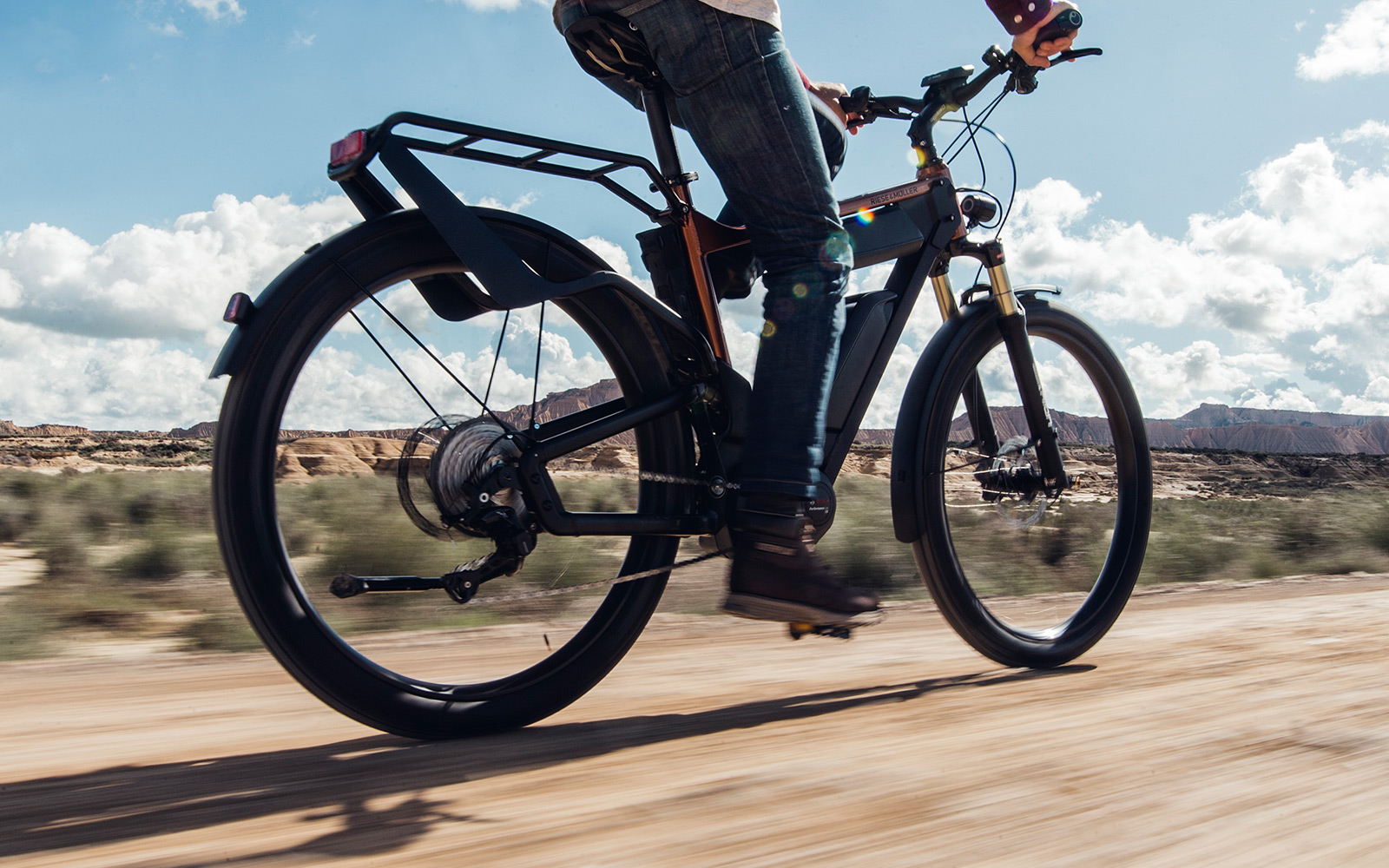 From e-cargo bikes, to folding, and now performance, Riese & Müller have an e-ride for everyone. The Delite Nuvinci doesn’t just look badass, it’s built for performance.

With a base price of $6000 it features hydraulic Shimano Deore disc brakes, a top speed of 20 mph, air suspension, and either a single 500 Wh or dual 1000 Wh battery setup. 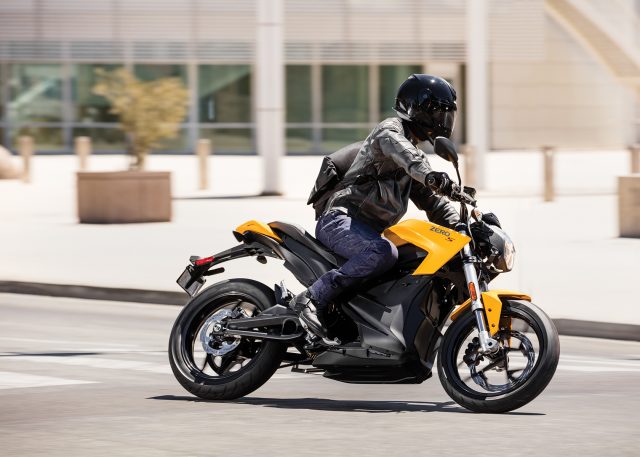 For the past decade Zero Motorcycles have been on the forefront of innovation in the electric motorcycle industry. With each iteration of their motorcycles, they continue to break mileage records on a single charge, with their Zero S now offering up more than 200 miles. Unlike standard bikes, this offers automatic shifting and only requires the twist of the throttle.

Much like other electrics, these also don’t require the other regular maintenance such as oil changes. Their bikes start at about $9000. 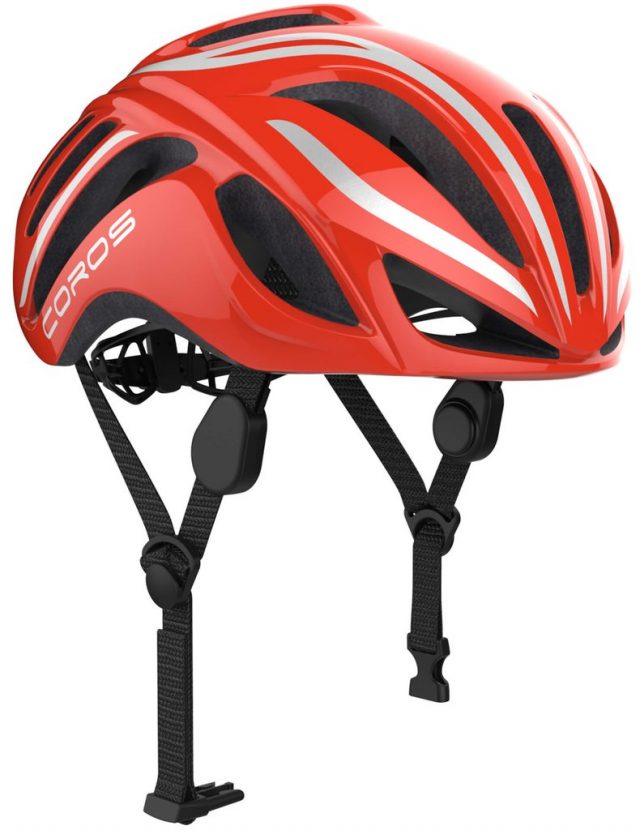 If you ride anything (except maybe the luggage) with a motor you really should have protection. Sure, you can buy the standard helmet that will keep you alive, but why not add in some tech while you’re at it. Unlike earbuds, the LINX Smart cycling helmet has built in Bone Conduction Technology that allows you to hear music, GPS directions, and talk to others with an intercom system all while still hearing what’s going on around you.

Read more reviews on gadgets and transportation at Tech.Co