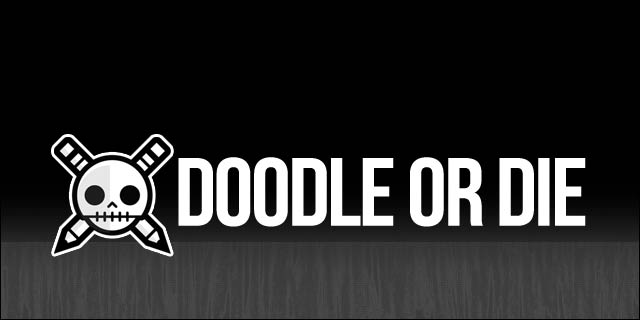 Telephone pictionary – the game where you draw something, your neighbor writes down what it is, his neighbor tries to draw it, and on and on until your original idea has been hilariously distorted – is now available online as Doodle or Die.

Now with thousands of players, the game was created during a weekend-long programming competition called Node Knockout, where it took home the prize of “most fun.” Cofounders Dylan Greene and Aaron Silverman, who were developers at Opower lacking in the art-skills department, decided to create a game where players would make the art.

“All of us except one are pretty pathetic artists. Even our stick figures leave a lot to be desired. Luckily, one of the strengths of Doodle or Die is that bad drawings evolve just as hilariously as good drawings so we still have a blast playing our own game,” says Silverman.

A plainer version of telephone pictionary online is The Sentence Game. Doodle or Die is also similar to Draw Something, a game owned by Zynga where you draw objects and your partner has to guess them.

After the programming competition, Doodle or Die spiked in popularity – which created some problems. Silverman recalls:

“The news of our victory spread to all corners of the Internet and attracted way more users than our first servers could handle. At the same time, some bad apples out there were trying to hack Doodle or Die every way they could – sneaking in image uploads, pasting entire encyclopedia articles in our text boxes, etc. We worked around the clock upgrading our hardware and cleaning up our ugly hackathon code. There were a few weeks were we would have to wake up several times a night to clean up the database and restart our servers.”

The Doodle or Die team is based in DC, and the game is free to play.