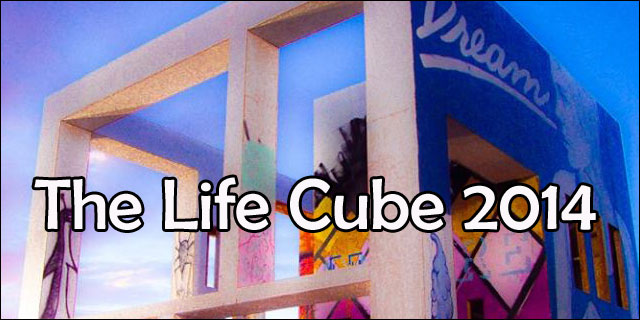 Schoot Cohen (skeeter) has brought a little slice of Burning Man to Downtown Las Vegas. Cohen initially designed an art project, the Life Cube, at Burning Man 2011 but has since evolved his concept out of the boundaries of the festival.

The Life Cube is a 3 story, 24 foot building constructed in a parking lot near the Viva Lost Vegas mural and it has become a purely community space. People can express themselves by creating and showing art to others.

Additionally, people cover the walls with goals, wishes, dreams, and aspirations with the belief that there is a better chance of achieving them. However, the Life Cube won’t be around forever as Cohen has planned a ceremony in which it is burned to ashes.

“The kids ask me all the time, why do you burn it?” says Cohen. “I’ve come up with 3 reasons. Reason number one: there has to be a finality to this project. I’ve enjoyed my time in Las Vegas, it’s been a blast, and I love watching what is happening here on a nightly basis, but there has to be an end. Reason number two: there’s a spiritual sense to it. The fact that these wishes, goals, dreams, and ambition all go up into the universe to me is something very personal. Reason number three is that it’s just really fun.”

The Life Cube is being burned on March 21, so be sure to get down there and check out all the fun.