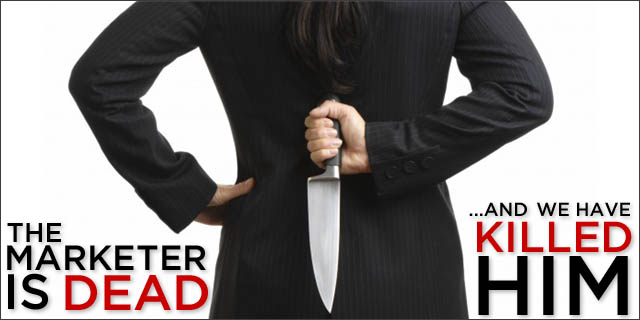 The Marketer is Dead, And We Have Killed Him. I thought about going with a less provocative title, but the purpose of this blog post is to prove that two broken assumptions exist in marketing.
And if what I am saying about why they are broken is true, then I want to see your reaction. That I may even get a reaction tells me all I need to know. Read on to learn why.

Advertising Sprung Out of the Head of Ogilvy

David Ogilvy is one of my advertising heroes. In fact, I love him so much, and his legacy, that I would say he is my certified number-one hero. He said:

Of all the things he said, I think this first part, “advertising is a business of words,” is the only thing that will always remain true about advertising. It is simply about storytelling, for which you use words. Ogilvy had to be correct about language, because in his day and age, you had only one big moment to showcase a product. It usually came out in a radio spot you only heard for 18 seconds, or it was a one-time spread in a newspaper one-pager that came out only on Tuesday.

You had to pick your words, and pick them closely. You could not pick your audience. Your audience was given to you by the people who delivered the content.

My, how things have changed. Now, if you are in marketing, your biggest challenge is not earned media, or finding the right platform on which to advertise your message. Your biggest challenge is creating a community, gathering audiences at a moment’s notice on any social media platform, and convincing them that what they are hearing, reading right now, is the most important gosh durned thing they will ever here in the next 15 minutes.

So, in reality, nothing has changed. You have to be good at language to launch. If you are not, get someone who is. It will all come down to trustworthiness, sincerity, tone, and precision of message. And that is a writer’s job.

The Tools Have Made This Happen

A writer knows of what they speak, and they know to whom. TV marketing looked like TV Marketing because TV content – and TV listening – looked and behaved a certain way. Nobody talked back to the TV – not that you would know if you were the advertiser. It’s also an artificially lit version of reality. Colors are starker. Lights are shinier. It’s been edited.

With newsprint, it was a little different. Something about paper conveys a different touch and feel to the words you use, because authenticity is arrived at in a tactile way. Holding up a newspaper, seeing the ad surrounded by “truth,” as reported by Woodward and Bernstein, conveys a certain something about the product being described in the newspaper ad.

You are also likely reading that paper in public. You are carrying yourself a certain way when you are reading; therefore, how you read says a lot about how you respond to what you read.

The digital medium is much different.

The medium itself is vocal because the tools we use to read the content are designed to talk back. The medium is filled with people talking to the marketer. You cannot be tone deaf anymore. You have to write in a way that understands that you know your audience, not just the medium.

Of course it is. Right? No. If that were true, then we’d never need advertising, because the value proposition rarely changes. The unique value proposition is what sets you against the competitor. If you were really that unique, you would have no competition!

You may have had this experience before. The spread of UVPs has been decided. Someone asks your community manager, “Can we use your channel to amplify this?” There is nothing wrong with using social media to amplify anything. But seeing amplification in this way is a fundamental error. The error being made is that anyone outside of you, and the people in the organization, cares that you think this thing is important.

That seems rude, so let me say it another way:  The error is that, in this scenario, we are making the assumption that the person outside of the organization has the time, and has given your message the same level of priority, that he or she is also giving to tweets from her favorite author, or texts from her friends, or an invite in the email that brings him to a rock climbing clinic in La Brae, California.

Yes, social media should amplify, but what it should amplify is the stuff that you already know from your customers because you asked them what was important.

Ergo: Marketing is The Journalism of Your Customer

Your customers, or partners, or the people who you gather around your brand, are the most unique thing in the world. And they happen to use your product. They are the unique value proposition. And they are human, and impossible to know by just looking at them. So you have to do your research, and communicate with them, in order to market to them.

Marketing has become a kind of reporting function, just like newspapers and the nightly news used to be. Marketing is a curatorial function that brings meaning and delivers a ranking of priorities to the market, in whatever niche you fill. It is the banner around which thousands of people gather, because in a world of fragmented media, where news organizations send out tweets with the wrong information during a breaking news story, and where stories lack real meaning and deep reporting, brands are one of the only functions that can source that storytelling.

Some people call this thought leadership. I think it’s more like being a cultural lightpost. You talk to enough people for long enough hours, and make people important enough, because they are important, and then suddenly your view on the world changes. As does theirs.

You are no longer trying to convince people that your product is any good. You are well-informed enough to help other people know the same things. You are creating a network of nodes that inform the public and increase the positive feedback loop of gaining access to information and making great business choices.

You are helping people, which is an entirely different job than selling soap to housewives.

Douglas Crets is the community manager and social strategist for Microsoft BizSpark, a program designed by Microsoft to provide software, support and visibility to promising startups all over the world. The program has over 50,000 startups from around the world, and partnerships with major accelerators like TechStars. You can find more information at http://www.microsoft.com/bizspark.