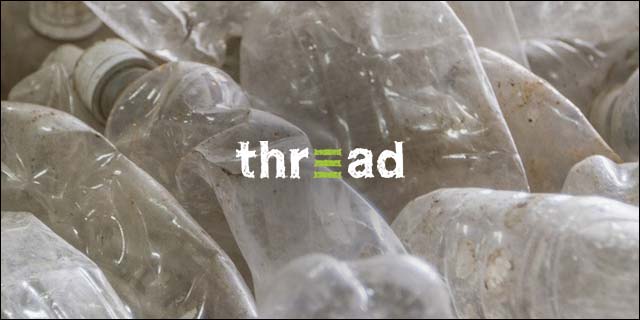 One Pittsburgh-based startup has come up with a unique solution to two of the world’s most overwhelming problems: poverty and trash. Thread is tackling these issues by developing a polyester-like fabric made from recycled plastic bottles and providing impoverished locals with jobs in the process.

The first place they set up shop was Haiti, which, post-earthquake, remains the poorest economy in the Western Hemisphere. Trash is collected for recycling, and residents are employed for practically every step in the process. Thread recently started another program in Honduras and hopes to set up shop in other developing countries around the world.

Thread was founded by Ian Rosenberger, Penn State alumnus, Survivor contestant, and former MADE coach (yes, that show on MTV). Ian had the inspiration for Thread during his first trip to Haiti in 2010, right after the devastating earthquake. During that trip he wrote in his journal, “If Haiti can turn trash into money = good.”

Sure, Thread is not the first startup with the idea of turning garbage into manufactured goods, but Ian and his team are hoping to do more than help eliminate trash. They’re hoping that by providing jobs and giving developing countries an alternative to the “burn and bury” waste infrastructure we see in many countries, they can also help “eliminate the slum mentality we so often see in ultra poor neighborhoods.” The ultimate goal is to lift people out of their current conditions and provide hope for a better future.

Speaking of competitors, there are not many that, despite working toward a social benefit, also have the transparency that Thread prides itself for.

“People like our stuff because not only is the supply chain 100 percent transparent, but we can break down where a product comes from from ground to good. Every step in the chain of custody is measured in terms of impact on the environment and communities.”

Thread is a unique addition to the Pittsburgh startup space where ventures in web, energy, and medical fields tend to thrive. However, the city's low cost of living, access to resources, and boatloads of talent coming out of Pitt and CMU (among others) have made Pittsburgh one of the hottest new cities to start up in. In fact, this location gave Thread the opportunity to bootstrap and make their funding last.