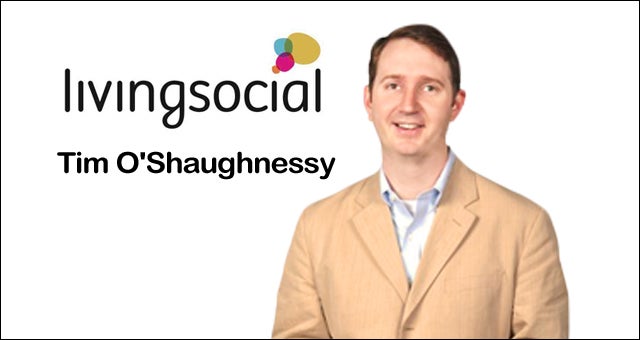 Tim O'Shaughnessy announced this morning that he will be stepping down from his role as CEO of LivingSocial, as reported by Bill Flook from the Washington Business Journal.  Word first spread in an email to the company earlier today.  Purportedly, the decision to step down was O'Shaughnessy's.

While LivingSocial searches for a new chief executive officer, which they believe will happen in the first half of 2014, O'Shaughnessy will maintain the position.   Of LivingSocial's original founding members – Eddie Fredrick, Aaron Batalion, Val Aleksenko, and Tim O'Shaughnessy, Aleksenko will be the only member still with the DC-based daily deals company once O'Shaughnessy departs.

“We now have the most stable and healthy business that we have ever had, and the luxury of having hundreds of millions of dollars in the bank to take us to the next level.  Like you, I have given my all to the mission of this company. And I remain 100% convinced the ingredients for success are here. Additionally, I’ve given much thought to the many opportunities that stand in front of us and the benefits that could come from a new perspective and a new voice and approach at the top to lead us there. My responsibility is to recognize that now is the best time to transition leadership – when that full set of ingredients is available to be used most effectively to shape the company’s future.”