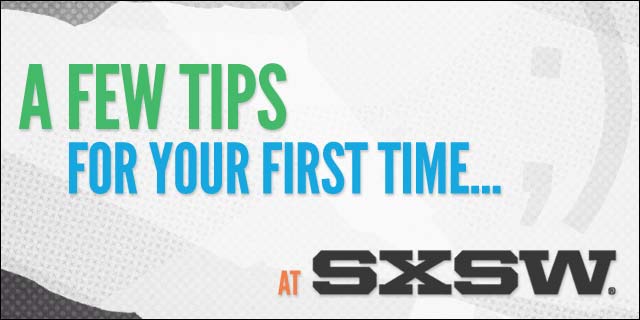 SXSW has become the launchpad to all things cutting edge and creative in Interactive, Film and, Music. Twitter launched, or ‘blew up‘ according to co-founder Evan Williams, at SXSW in 2007. Prince performed a six-hour comeback concert last year. Chelsea Clinton will be a keynote this year. The experience can be fulfilling, albeit a little daunting. Will this year be your first time at SXSW? Here are a few tips to help you navigate the best in food truck delicacies, speed networking, crankin' music, and spastically overlapping scheduling that is SXSW:
1. Don't over-schedule – SXSW has one of the most intense schedules you’ll ever experience, for both registrants and non-registrants, and with so many landmark panels, workshops and events, FOMO is real. I would suggest selecting a few stand-out events and having a few backups if time allows. Don’t try to do everything. You are setting yourself up for failure. Moreover, you will most likely find something even more interesting on your way to your tightly scheduled events. Yes, it’s that kind of party.
2. Be open, talk to everyone –  One of my most memorable experiences at SXSW was eating a taco on a bench at 4AM after the (free!) six-hour Prince concert, with the founder of uShip. Over some of the best dang food truck-bred chicken tacos I've ever had, we talked the success of uShip, starting up, politics, and of course Prince (!) The networking at SXSW is like no other, but be ready to do it unconventionally.
3. Dress Comfortably – Dressing comfortably means way more than you know at SXSW. Your hotel that's ‘only eight miles away' via your trusty hotel website, didn't mention that eight miles really isn't eight miles if you have to walk on a highway.  You'll also walk for long stretches through the convention center, or throughout Austin, as most programming is not at the convention center. You can't count on a taxi. In fact a lot of taxis simply stay away during SXSW due to the congestion. Dress comfortably and pray that you can ‘Catch a Chevy.’
4. Going badgeless isn't a deal breaker – Don't forfeit this awe-inspiring experience because dropping $650+ on a badge is just not an option. The streets and bars are brimming with free events. The festival itself even has a few.
5. Stay for the entire event if you can – As the festival overlaps, Interactive, Film, then Music, there is a real positive and fun shift in energy and excitement. The collaboration between the groups is like a think tank on steroids. A think tank with a lot of alcohol, drums, and food trucks. And Childish Gambino. ‘Nuff said. See you at Tech Cocktail's Startup Celebration at SXSWi on March 8th at 7:30PM!