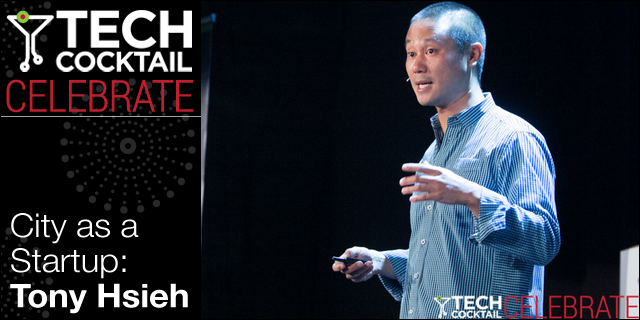 Disclaimer: Tech Cocktail is funded by the Downtown Project

Kicking off the afternoon sessions on day one of this year's Tech Cocktail Celebrate Conference was the Downtown Project's Tony Hsieh. The theme of his talk was not one we're strangers to – The City as a Startup – but it's no less inspiring as Hsieh truly embodies what he preaches.

A $350 million revitalization project for downtown Las Vegas, the Downtown Project's main focus is not on ROI but rather long-term ROC and ROL, return on community and return on luck, respectively. According to Hsieh, when you focus on these aspects of building a startup, tech or otherwise, you're effectively accelerating innovation, productivity, and serendipity.

When a city doubles in size, he says, productivity and innovation per resident increase by a factor of 15 percent, but that same mode of thinking isn't readily applicable to companies. Hsieh has found the recipe that helps facilitate similar growth for companies, though.

“Get together in a relatively small space all these entrepreneurial and creative types that have a bias to talk to each other and collaborate, statistically the magic will happen on its own,” says Hsieh.

It's simple enough on paper: create a culture of openness, collaboration, creativity, and optimism. The inspiration to succeed with the Downtown Project, for Hsieh, comes from the story of the four-minute mile.

“If we can do it here [Downtown Vegas], maybe we can be the four-minute mile for the world,” says Hsieh.

It's an idea that some people may have doubted in one way or another after the news headlines last week saying that Hsieh had stepped down from his role with the Downtown Project. However, Hsieh informed us during the Q&A session that none of that is true and was based on a misunderstanding.

“Last week was an interesting week in the media. I saw these crazy headlines that said something like I was stepping down from the Downtown Project,” said Hsieh. “The Downtown Project is, as we refer to it, a collection of 300 businesses and legal entities. I'm not sure where the miscommunication came from, but my statement was that I'm not involved in the day-to-day operations of these companies. Somehow it became this headline that I was leaving the Downtown Project, which I'm not.”

You heard it here, my friends: Hsieh won't be going anywhere anytime soon. And we're thrilled to have him continue working alongside all the dedicated individuals who are trying to make Downtown Vegas the most community-focused city in the world.