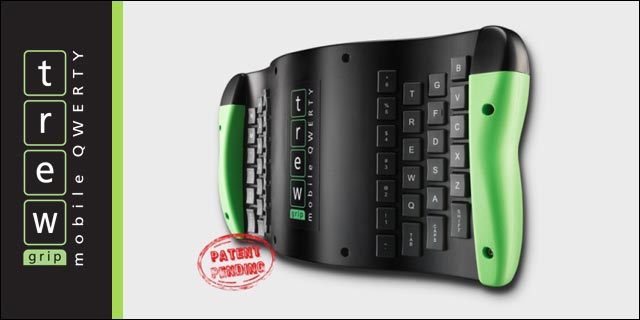 At first glance, it's really difficult to see how the TREWGrip backwards keyboard could actually prove useful or even functional for any normal human being. But I guess that's the point, isn't it? Something that may not look functional may actually prove to be very functional once we lay our hands on it. For founder Mark Parker and his team at Outlier Technologies, this disconnect between merely seeing and actually experiencing a product is what helped them turn an unsuccessful Kickstarter campaign into wide popularity at CES.

TREWGrip is a mobile QWERTY keyboard initially designed for mobile technology, but it can be used with Smart TVs and desktop devices, too. It's a “rear-type” handheld keyboard with keys located behind. Imagine holding a larger-than-average game controller with the keypad right underneath the controller. As a consumer of tech devices, it's honestly really hard for me to take TREWGrip seriously just by looking at it.

“What we learned was that Kickstarter was really more consumer-focused…and people couldn't put their hands on the TREWGrip.” said Parker. “For CES, we really worked on focusing our message for [B2B and B2G].”

There lies the problem with TREWGrip – an issue that affected the overall effectiveness of the product's Kickstarter campaign. At the end of their unsuccessful campaign, they discovered that the product was 1) not fit for the consumer market and 2) the idea would go nowhere unless people actually got to experience TREWGrip in their hands.

For the product's Kickstarter campaign, many expressed that the price point seemed too high, which the company can't really compromise on at this time simply because the cost of manufacturing curved devices is far too great. Parker knew that, going into CES, they would have to shift their focus from the consumer market to B2B and B2G opportunities, as well as making sure that people actually got to try TREWGrip.

Once people actually got around to having TREWGrip in their hands, public support and opinion for the product catapulted TREWGRip to the position of finalist for the “Best of CES 2014.” This same approach – allowing people to interact with TREWGrip – has allowed them to form connections in the medical industry, where the device can be put to several uses in the field, especially when it comes to quick, mobile, data entry on patients.

In retrospect, though, the company should have anticipated the response from their Kickstarter, considering that TREWGrip gained much of its validation from the product's launch at the Cincy Typing Challenge (an event specifically set up for the purpose of presenting TREWGrip to the public). Oh, well — lesson learned.