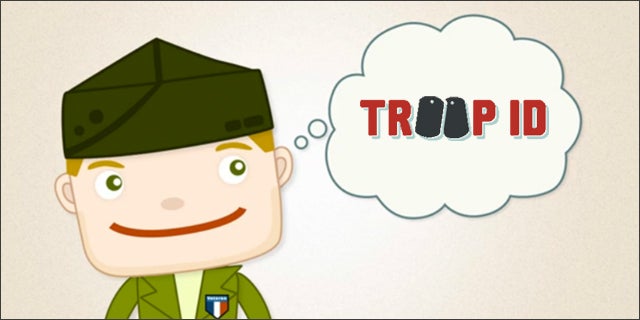 Many companies want to offer online discounts to veterans, but they worry about non-military customers lying to save money. TroopID verifies military affiliation (with information like Social Security number and birthday), and participating websites can use it to check credentials. Hall has some kind of relationship with the Department of Defense to crosscheck service information, but he’s not disclosing exactly what.

Apparel company Under Armour has already signed on to offer veteran discounts. In addition to stores, TroopID can be used by companies looking to hire veterans or offer training. “There’s this sea of goodwill,” says cofounder and CEO Blake Hall, who started a daily deal site for veterans called TroopSwap.

Hall spent four years on active duty, including 15 months in Iraq. He was inspired by 9/11 and his military family: his father and grandfather were soldiers, and he spent his childhood hopping between military bases. After coming home, Hall realized how tight-knit the veteran community was and how much businesses wanted to reach them. But due to fraud, most benefits to veterans were only available offline.

For Hall, being an entrepreneur is an extension of being a solider: a way to help people. He remembers sitting down with his fellow soldiers after destroying an Al Qaeda network that was killing over 1,000 people per month.

“I said, ‘Hey look, in 30 years when you put your grandkid on your knee, this is something that you can tell them that you did over here and be incredibly proud. You’ll never see people’s faces that you saved, but bombs that would have gone off are not going off because of you, and you’ve changed people’s lives whether they know it or not.’ And I think that for me entrepreneurship has many of the same implications.”