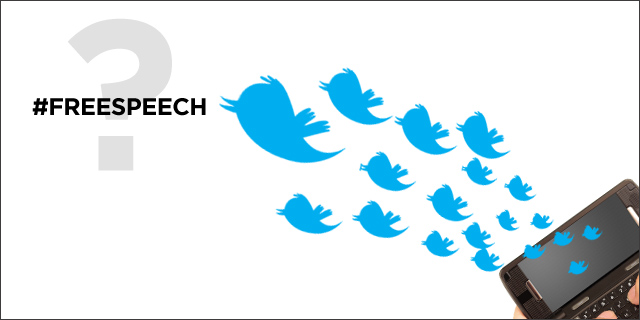 Well, Twitter didn’t exactly use the word “censor.” But “withholding” particular tweets after they’re posted sounds like censorship to me:

“Starting today, we give ourselves the ability to reactively withhold content from users in a specific country – while keeping it available in the rest of the world. We have also built in a way to communicate transparently to users when content is withheld, and why,” Twitter said in a blog post.

Twitter will send emails to users when their tweets are blocked, including who requested the block, and mark the censored content on Twitter (see below). You can also find notices on Twitter’s Chilling Effects page. Twitter further admits that they “will not be able to exist” in countries with radically restrictive ideas of free speech.

As an example of objectionable content, Twitter cites illegal pro-Nazi speech in France and Germany. But two years ago, in March 2010, Twitter didn’t initially block a Nazi Twitter account even in the face of user outrage. Twitter also expressed a strong endorsement of free speech in a January 2011 post during the Arab Spring titled “The Tweets Must Flow.” (Yesterday’s blog post is misleadingly titled “Tweets Still Must Flow.”)

Twitter is justifying their current plans as the consequence of expanding worldwide:

Many countries, including the United States, have laws that may apply to Tweets and/or Twitter account content. In our continuing effort to make our services available to users everywhere, if we receive a valid and properly scoped request from an authorized entity, it may be necessary to reactively withhold access to certain content in a particular country from time to time.

But while there are legitimate uses of Twitter censorship – such as deleting tweets that threaten harm to others – such content could always be removed worldwide. When Twitter withholds tweets only in particular countries, those tweets are probably legal in the United States – which scholars recognize as having some of the broadest speech laws in the world. By blocking tweets selectively, Twitter is failing to stand by the US vision of free speech. At least they are doing so transparently.

What do you think of this move by Twitter?