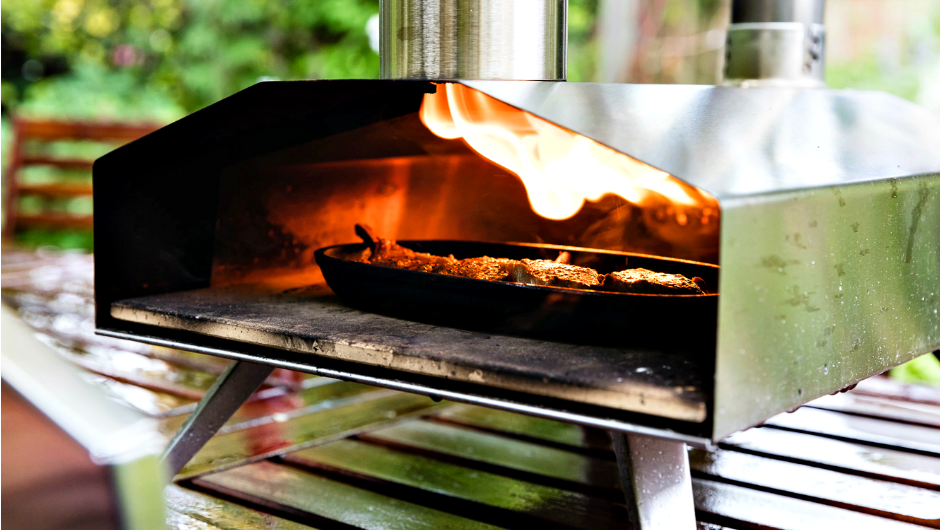 During the summer there is nothing quite like firing up a grill, popping a few bottles, and enjoying a weekend with friends. Typically when you think grill, that means meat, meat, and maybe a few veggies mixed in there. However, with Uuni 3, a portable wood fired pizza oven, that is all about to change.

What initially resulted from an insanely successful (funding wise) Indiegogo campaign, Uuni is now in its third iteration and is easier than ever. Once fired up this little pizza oven can perfectly cook a small pizza in about 60 seconds, and you’ll get the amazing wood fired flavor most of us love.

We put the Uuni to the test through several weekend pizza cooking sessions, a failed impromptu pizza party, and a couple of backyard pizza cookoffs,

After unboxing the Uuni, this may have been my favorite device to have got up and running. No WiFi, no bluetooth, nothing but popping a few pieces into position, tossing in some wood pellets, and a healthy dose of lighter fluid (you’re not really supposed to do that part). Uuni recommends using a torch, which is then held to a small hole in the size where the pellets are stored. I did a bit of improvising, which worked out pretty well, but I would recommend going with their approach so you don’t create unneeded fireballs from the chimney (that happened, it was cool). 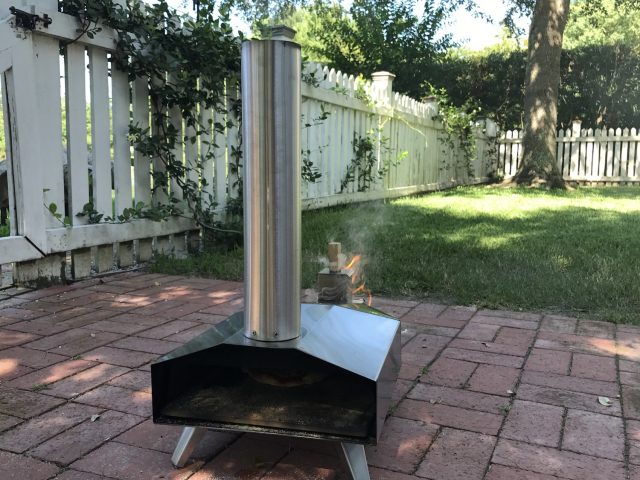 To actually put Uuni together it only takes about 5 or 10 minutes. The legs simply fold out, the chimney clips into place, you just need to screw on the door handle, toss in two metal components inside it, add in the pizza stone, and then fill up the wood pellet hopper.

During my first attempt to get the Uuni up and running, which mistakenly was supposed to be an impromptu mini-pizza party, it was an exceptionally breezy day and it simply wasn’t having it. A few days later and having done some research, it would appear that wind direction and Uuni are a challenge pair, but once the fire is rolling it’ll be good to go. With that said, according to Uuni it only takes about 10-15 minutes to get it hot enough or 932°F, but it can be a bit finicky at times. Because of this it took closer to 25-35 minutes for the pizza stone to get hot enough. Once it’s at temperature though Uuni will absolutely cook a pizza in about 60 seconds, with the occasional turn or two along the way. It does run through pellets relatively quickly so expect to refill them between pizzas.

Once you’re done making pizza, just dump the remaining wood pellets into some water and it should only take about an hour for Uuni to cool down enough to be packed up. 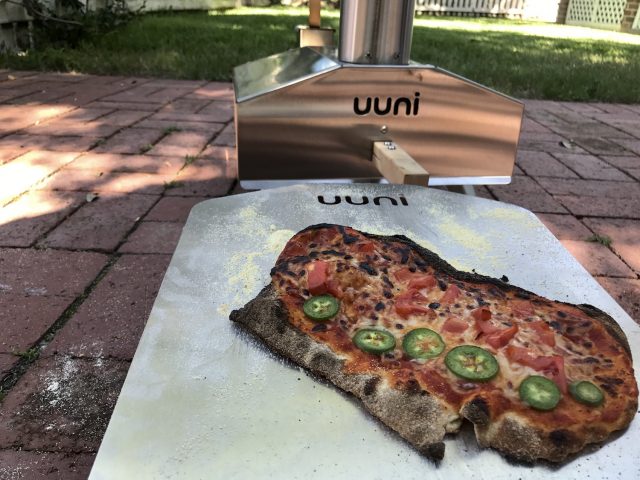 While I’m certainly no chef or master pizza creator, I did pick up a few tricks along the way on how to best make an amazing pizza in Uuni. While this is a portable pizza oven you can also cook other things in it like fresh bread, fish, meat, or veggies (food with short cooking times).

For starters, sticky dough and the pizza stone will not mix. Even with some typical flour on the bottom of the pizza all I got was a glued on mess, so you really need to work the dough and make sure the flour is kneaded into it. Personally I used a bunch of cornmeal within the dough and underneath it, which made it come out perfectly. 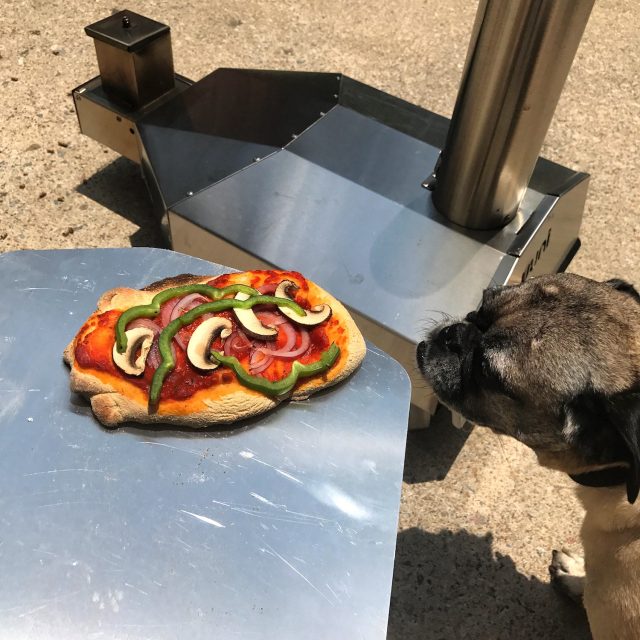 I’m from Chicago, and yes a deep dish pizza is a damn pizza. With that said I absolutely love regular crust, but the thicker you go with Uuni the more likely you’ll run into some bumps. As you can see from the photos the crust puffed up great, but if you keep it thin you won’t have any doughy issues.

Easy On The Toppings

I know, you want to load that pizza up with toppings. For thin crust you really can’t just dump a bunch of weighty toppings on it and expect it to stay together. If you work the dough and firm it up a bit, it’ll support more, but it’s still iffy. My friend tried to add some artichoke, sausage, sauce, and cheese, and that thing fell apart before it hit the stone. You can also do a quick pre-cook on the crust and then add on some toppings to finish the cooking it. That does not mean adding on toppings after it’s cooked. That’s weird and the pizza would be terrible. Also while we’re on toppings, why would you put pineapple on a pizza?

You probably should not do what I did and add lighter fluid to the wood pellets, but frankly Charleston gets windy on the regular, so it had to be done. With that said, Uuni suggests using a torch of some kind (not just a lighter) and directing it towards the pellets. That should eliminate some of the finicky fire starting stuff. 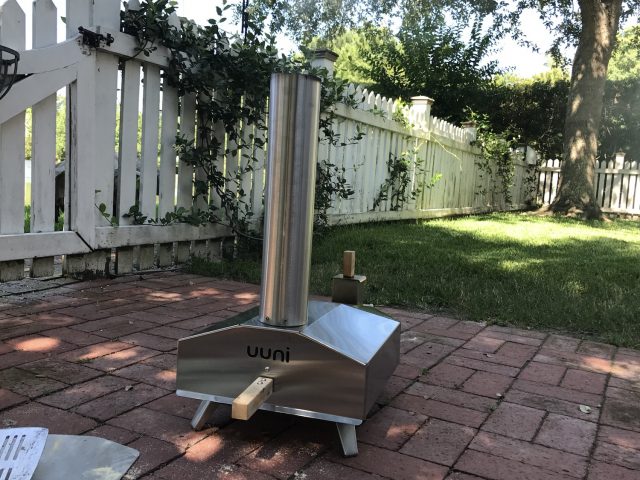 One of the amazing parts about Uuni is that it was designed to be portable. It takes only a few minutes to get up and running, once the fire is started pizza will cook in no time, and the cool down period is not all that long either. The design itself is pretty impressive. The cap for the chimney doubles as a wood pellet funnel, and the cover on top of the wood pellet area acts as a handle to pull out the pellet tray.

The exterior of Uuni is almost entirely made from brushed stainless steel, with the exception of two wooden handles. Due to my dabbling with lighter fluid one of the handles got a bit of fire damage due to excess flames, so again, use a torch. The thing is also pretty light for what it is, coming in at about 20 pounds. It’s also short and stocky, taking up about the same space as a small tailgating grill, but can cook up to 13” pizzas. During the tests we ran through we usually did personal pan sized.

Overall the construction and simplicity in putting Uuni together was a delight, and the only real thing you need to worry about is the pizza stone. Those are not the most durable thing, then also tend to chip, so you’ll just need to be careful with that part. We ended up storing it in the box and padding it came in after it cooled down. 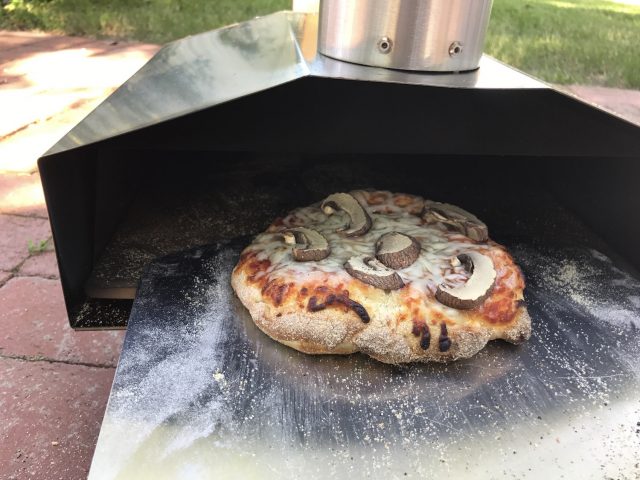 Should you buy the Uuni? If you like pizza, and we’re pretty sure you do, absolutely! Gone are the days of eating those so to speak not delivery oven pizzas and less than great actual delivery pizzas. If you want real, wood fired pizza, Uuni will get the job done. There is a very good chance you’ll have to do some trial and error with getting it lit and cooking for your first few attempts, but like any new kitchen gadget this is to be expected. Plus, if you do get a torch you should have no issues anyways.

There are two caveats to this of course, one being that you can expect some bumps while trying to light Uuni in the open on a breezy day, and we also did not test this during any kind of cold day, so we can’t speak to that.

For these reasons we give Uuni a 4.5 out of 5, because the only thing better than a good taco is a wood fired pizza.

Now who's coming over for a pizza party?

Where to buy: Uuni, Amazon