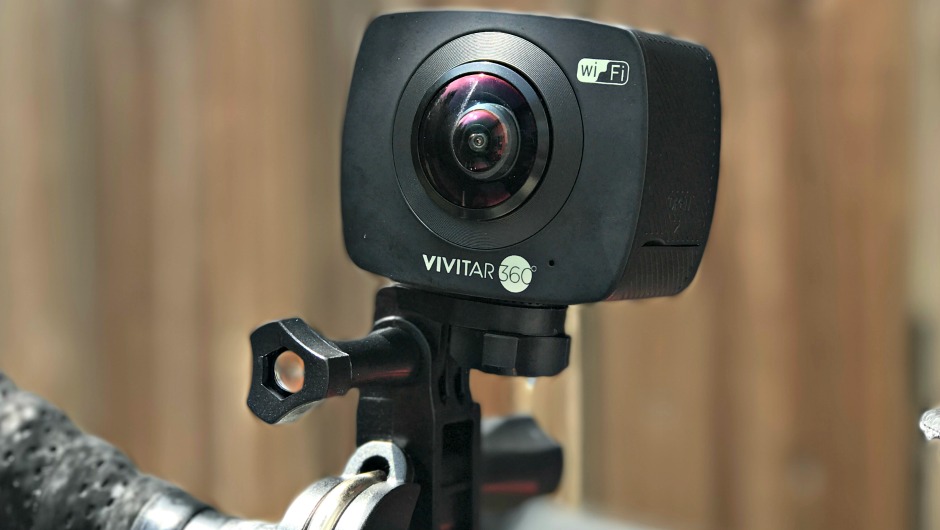 Ever since the Matrix first came out in 1999 (almost 20 years ago now), the world become intrigued by the concepts of 360 degree video and images. Though clearly a different technology, bullet time, the concept is quiet similar and thanks to improvements in technology, most consumers can now afford it. Like 3D technology, 360 degree imagery has not yet hit the mainstream, but thanks to virtual reality that too is increasing the need for new content. Rumor has it that some smartphones may even add dual lenses into future models to capture 360 degree or virtual reality content, but until then standalone devices are becoming more affordable. One such camera is the Vivitar 360, which also doubles as an action cam.

This tiny, dual fisheye lens camera pushes a 4K resolution output, high resolution images, an OK battery life, and comes with a few bells and whistles to capture everything around you. Compared to the other current 360 cameras on the market, Vivitar’s falls behind by anywhere from $100 to $300 less, but also lacks basics like live streaming. To put their latest model to the test we used it around Charleston, North Carolina, and attempted to capture the total solar eclipse (unfortunately it was too cloudy). 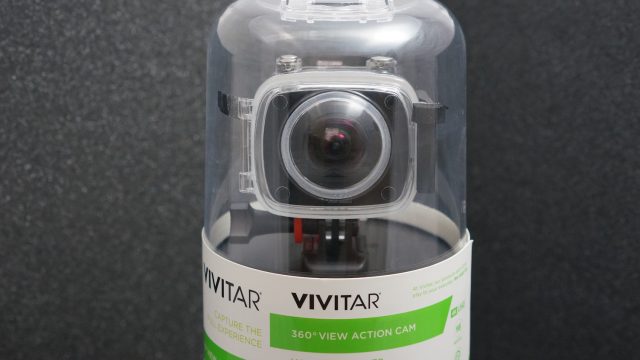 If you were to classify Vivitar’s 360 camera, it’s be equivalent to a point and shoot. Once charged and a MicroSD card is plugged in, you can immediately start taking photos or recording video. In fact the settings are relatively simply anyways, so you’re really only going to be adjusting the resolution or image quality on the camera itself. The camera also has WiFi built into it so that you can use your phone as a viewfinder, and from there you’ll find some additional advanced settings that we’ll get into in a moment. As far as ease of use goes, there is close to no learning curve with the Vivitar 360. 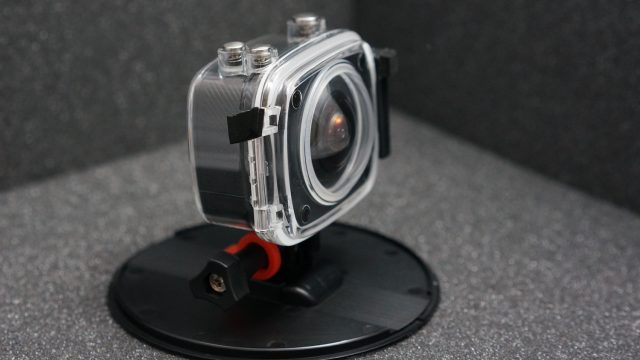 As a 4K camera there is a certain quality of imagery and video you’d expect to come from the Vivitar 360, but due to the sensor and it’s ability to adjust for lighting it can be a bit rough around the edges. The output is nothing to scoff at by any means; however, simply looking at the images and video will show you that the resolution does not necessarily equate to crisp, highly detailed outputs, nor does it mean that the sensor can adjust well to all types of lighting. The two issue are tied to the field of vision and artifacts. Using any kind of fisheye lens will create some distortion, and maybe it’s a software effect in this situation, but as you can see in the video of crabs popping out of their holes, the only full HD, crisp area of focus is directly front and center.

For the most part this is entirely normal, especially as YouTube, Facebook, etc. have to stitch all the pieces together, but the blurring or area of focus seems to be especially small in this case. To ensure it wasn’t just the upload medium, I checked both Facebook and YouTube, and the effect was the same.

When using the Vivitar outdoors and in broad daylight, the Vivitar works generally well. Hide it under a bridge and the lower lighting has a clear impact, and the same goes for standard indoor environments using fluorescent lighting. In a North Carolina museum with awesome lighting, the results also looked great.

When it comes to stitching, the Vivitar works wonderfully. This appears to be a second iteration of the camera, as former reviews seemed to have some issues stitching in the past and showed parts of the camera in it. Now this works near perfectly, and the only artifact area is directly under the camera itself. If you’re using the waterproof case, tripod, or mount, you won’t have much more than a small blob under the camera.

Overall the Vivitar 360 is certainly one of the more affordable 360 cameras on the market at only $150, and it offers some pretty solid output for what it is. While you certainly won’t see cinematic masterpieces being produced with it, this is perfect for stashing away on vacations, adventures, and general use.

Like most action cams now, the Vivitar 360 is small, light, and durable (in a case). With a married of mounts, a waterproof case, and a mini tripod, it can also be used for anything from water activities to a casual class or office environment. Coming in at all of four ounces, you can easily put the standalone camera in your pocket without much of a fuss besides a weird little bulge. 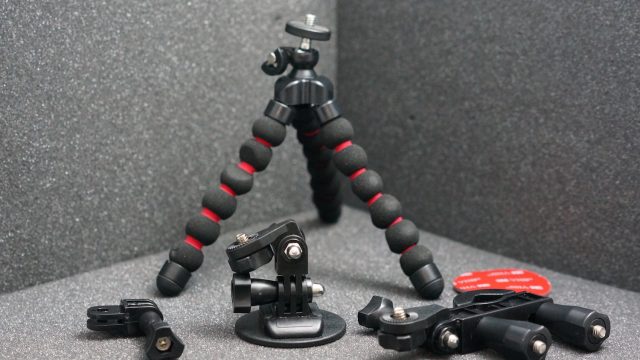 The camera itself is made from a smooth black plastic, has three physical buttons (on, wifi/settings, and take photo/record), a standard mount input, the dual lenses, and a flap that hides the MicroSD port and Micro USB port. The included accessories share the same style, with the exception of the mini tripod that features a foam material.

Included in the set are the waterproof case, a mini tripod, bicycle mount, helmet mount, and wireless wrist remote. Overall each of the mounts worked well, didn’t add too much bulk to either my bike or helmet (yeah, I know, it’s not aero), but certainly get the job done. Waterproof case or not, you probably don’t want to drop this little thing either. The two lenses take up most of the surface area, and they are bound to disagree with clumsy actions. 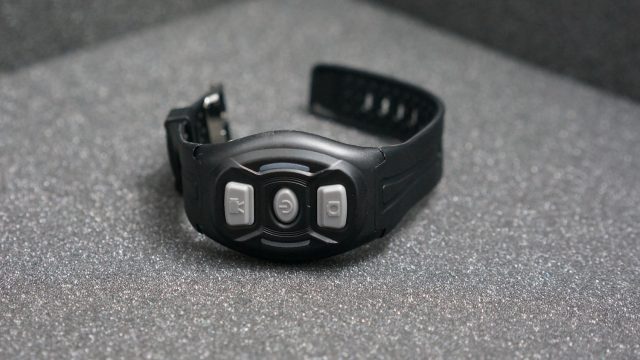 As far as apps go, the Vivitar 360 app (we tested the iPhone version) works well enough and is easy to use, but it did occasionally crash, especially when moving from image viewer to gallery mode. Unlike the physical buttons or included wrist remote control, the app gives you easier access to the controls, acts as a viewfinder, and as a media player for captured videos and images.

With the app and camera connected, you can even pop your phone into a VR headset (like Google cardboard) to produce a virtual reality like experience. Granted you’re either going to be tethered to the devices wifi or reliving what you filmed before, but this is a pretty nifty add on. The same can be done by uploading the video or images to Facebook or YouTube (video only) though.

Besides the occasional crashes, the only feature that seems to be missing is the ability to live stream. I tried to rig the camera up directly to a computer to see if it would recognize it as a camera output, but no dice there. Livestreaming is one of the primary features most of these 360 cameras have now (Gear 360, 360fly, Ricoh), so that’s a bit unfortunate.

The 4K video output is overall good, especially when you’re in a well lit environment. In low light or fluorescent lit indoor environments, plan to either bring in some lighting reinforcements or this simply won’t look that good. For images, this too does a good job of capturing the world around you, but expect lighting to be a concern depending on where you want to use it.

Both tiny and and versatile, the camera does pack some decent features into a small package; however, we did run into a few basic issues along the way. From the occasional app crashes, to the camera freezing, it certainly didn’t stop me from making good use of the camera; however, just expect to have to fiddle with it on occasion. Based on Vivitar’s price compared to other 360 cameras, the accessories, features, video and image output, we’re giving this a 3.5 out of 5. If they added in live streaming and fixed some of the software issues we’d bump it to a solid 4 though.

Where to buy: Amazon, Best Buy