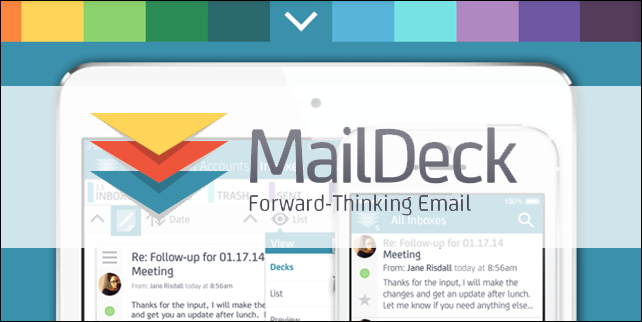 Inbox! Inbox! Since the release of Google Inbox, I feel like talk of its features – and from whom one can score an invite – is one of the most prioritized topics among a certain subset of my social network (i.e. the tech/Internet/startup circle of connections). But should we be so excited? I mean, after all, only a very small percentage of the online population has access to Google Inbox – it's not like we can take advantage of its features. Indeed while the launch of the tech giant's new app to support one's fight towards inbox zero is certainly laudable to some extent, its complete nonexistence in users' phones nullifies any probable effects. Instead, why not take advantage of the powerful email solutions that are already available? MailDeck can offer just that.

“Email hasn’t changed in over 20 years, but we still use it everyday,” said Jack Freeman the cofounder and CTO of Crono, Inc. – the startup behind MailDeck. “MailDeck is a new take on email. It offers a variety of unique features to make you more productive and allows you to fully leverage the information emails contain.”

MailDeck is an iOS email application that allows users to work much more productively and efficiently through their emails. It does this by tailoring a user's email experience through its “Conversation” feature, which compiles all related content into one screen – whether it's messages, people, attachments, or tasks. With a smart search function, MailDeck users also don't waste as much time finding important emails on their iPhones or iPads; they can simply specify certain criteria, such as whether the email they're looking for includes an attachment or when the email was received.

“We want to change email everywhere. Our goal with MailDeck is to expand to other platforms while also enhancing our current feature set. We are constantly looking for ways to make email better, and we strongly encourage user feedback to make sure our goals align with our customers’ needs.”

Initially released for iPad in December of last year, the company recently launched MailDeck for iPhone in August. The app offers support for Gmail, Yahoo, iCloud, AOL, Outlook, Office 365, Microsoft Exchange, and others, as well as giving users the ability to sync multiple email accounts. MailDeck has been featured as Apple's #1 Best New Productivity app in the United States, and according to Freeman, MailDeck 3.0 is expected to go out early next year with even more feature to improve the email experience.