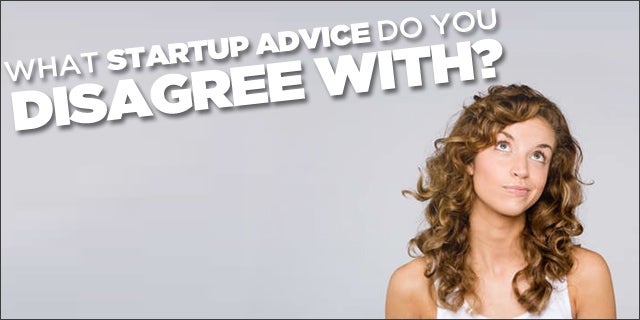 Almost everyone has startup advice to offer these days – from the media to your grandparents. But the same advice doesn’t apply to everyone; every startup is different. If this were a science, we would have figured it out already.

With that in mind, we asked entrepreneurs what common startup advice they disagree with. Here are some of the best responses.

“Not all startups fit that mold. Just because Silicon Valley is pushing out media that says it is the best method, in reality it largely benefits the portfolio investing style of the incubators and accelerators. Most companies are given just enough money to fail royally. The majority of the successful companies we all now commonly know raised huge rounds right from the beginning.”

“Fail early and fail fast. This is just ridiculous advice. If the idea was such a flop in the first place, it should have never been attempted. Too many people rush to the word ‘startup’ without having the discipline to actually do some business research first. Besides, when you fail, you only learn what not to do next time. The important thing is learning what to do right, and that often starts with smart business planning and research first.”

“That it's not ok to work part-time. Consulting a few hours a week here or there while you bootstrap is a responsible way to keep your business's runway longer.”

“Get a technical cofounder”

“I disagree with the common advice that you need a technical cofounder. If you are a founder with significant experience and can handle the pressure of multiple roles, then you don't always need a tech cofounder. . . . You can ‘hire’ a CTO and give them significant equity to make them a part of the team. The point is that you, the founder, retain control and decision making authority. In a startup, the most critical part is fast execution and that requires quick decisions. If you have 1-2-3 cofounders and you spend a few days analyzing/arguing over a decision, that's vital time lost.”

– Upen Patel, founder and CEO of Digital Wallet Plus

“You start with a false sense of security because you already have money in the bank but nothing driving it. There are a lot of upsides and downsides to looking towards investment capital initially. However, I believe that if it's my money on the line right away, it's going to push me to make stronger decisions as well as be more agile to initial storms.”

“The whole idea of build an audience and figure out how to monetize it later is one I have a hard time seeing as a plan with a reasonable chance of success. While it can be a huge success if you can acquire a big audience, the number of startups that have actually achieved that is miniscule.”

“Hire slow and fire fast. I think this is completely incorrect. At the early stage, you need to hire fast AND fire fast. By taking too much time hiring, you miss opportunities as well as great people that might not be exactly what you're looking for, but may blow it out of the water in other ways you hadn't thought of.”

“Do it when you’re young”

“If you have a passion and drive to succeed, you can do anything.”

“I understand that the team and execution are critical, but you need to be starting with a good idea as well, solving a true pain point.”