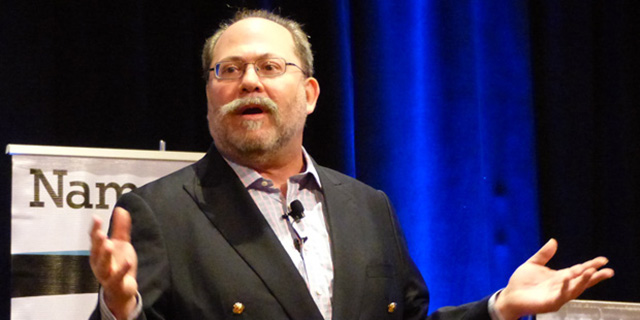 What is the power in a name? In a keynote address at NamesCon, The Premier Internet Names Conference, Howard Lefkowitz shared his expertise in the travel and entertainment space as it relates to domain names.

In a very interesting analysis, Lefkowitz points out that books .com, shoes .com, and even search .com are rarely used and barely known. It's the brand that dominates these spaces that matters.

“Brand is not just advertising. Brand is creating a brand promise to a customer, and how you engage with that customer in every possible way,” he says.

Simply having the name vegas.com, upon which Lefkowitz has built the bulk of his legacy, is not enough to launch a brand. The relationship that brands build with their audience is what will launch the business into success. Amazon .com was registered two years after books .com. First to market in this space is not the silver bullet.

Simply owning a TLD, or Top Level Domain, is about the same as owning an undeveloped piece of property. What is perhaps the most common domain extension today – .com – will not define market stake or domination in an industry.  “That doesn't mean it's forever. Nothing is forever. Change is mandatory.”

The major tv networks had fifty years of ingrained loyalty, but within 15 years, they lost 75% market share to niche markets. The TV “networks” are really not even called networks anymore. What do you think millennials would say if you asked them to list the “top three networks”?  Today, they are not even giving a second thought to NBC, CBS, and ABC.  “Google, Facebook, and Twitter” or  “AT&T, Verizon, and Sprint” were the most common “networks” named in a recent survey. This illustration is used to stress the fact that the way things seem to have always been does not establish the way they always will be.

As such, Lefkowitz stresses that .com will not remain the dominant extension.

The .vegas extension is being used by 1200 travel industry companies – the airport, various hotels and shows; and there are 400 domains on the .buzz extension. The top destinations in the world are deployed on a .buzz extension.

So, the question is: How do we mainstream these alternative domains? Conference attendees were given the challenge to keep working to forward their brands in an industry that is always changing. Take a look at the full video for more: