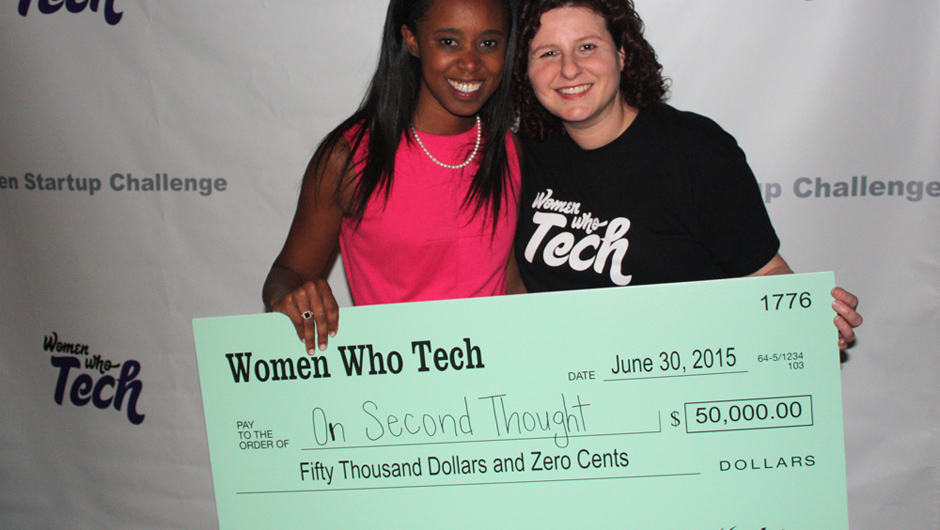 Seven years ago Women Who Tech was created to bring together talented and renowned women breaking new ground in technology. Not only do these women inspire change, they use their tech prowess to help transform the makeup the local ecosystems and communities they’re a part of.

Everybody at Women Who Tech has been inspired by the rise of women in tech organizations, but they all agree that it’s just as important to get female-led startups more access to capital. According to them, 93 percent of investor money goes to startups founded by men, and that number hasn’t changed much in 10 years.

That is, these women in tech already have the innovative ideas, but to scale and be successful they need funding, advice, and guidance. The good news, though, is that Women Who Tech has taken the conversation to the next level by offering a legitimate solution: Women Startup Challenge.

On November 9, 2015 at Microsoft in Times Square, Women Who Tech will officially be hosting their second ever Women Startup Challenge. They'll be showcasing 10 of the best women led startups in the Northeast region alongside Craig Newmark, the founder of Craigslist who's also working on craigconnects: his personal, web based initiative to support philanthropy and public service.

“The Women Startup Challenge showcases and funds innovative, women led startups and disruptive ventures that are solving problems for people, businesses, and the planet,” says Women Who Tech founder Allyson Kapin. “If we truly want to innovate and create the best products for people in this world, we need to radically change how we invest.”

One grand prize winning startup will get a minimum of $25,000 in cash, to be awarded by Joanne Wilson and Susan Lyne, of AOL's BBG Ventures. Runners up will receive consultations with investors and startup services.

Then, on November 10, the finalists will join investors for a follow up event, the first ever Women Startup Speed Dating. They’ll receive access to investors and experts who can help them hone their startup pitches and company ideas.

“Only seven percent of all investor money goes to women led startups,” says Newmark, who is partnering with Women Who Tech on the competition. “Yet, studies show that women-led ventures deliver a 35 percent higher return on investment and generate 12 percent more revenue than male run startups.”

What I like about this solution is that it's incredibly disruptive and deliberately aimed at culture and economy making it difficult for women in tech to access capital. We’ve seen countless companies reap the rewards of success via disruption, and I think that the Women’s Startup Challenge will follow suit. If you're interested, applications are open and will be accepted until September 30 – best of luck to all!