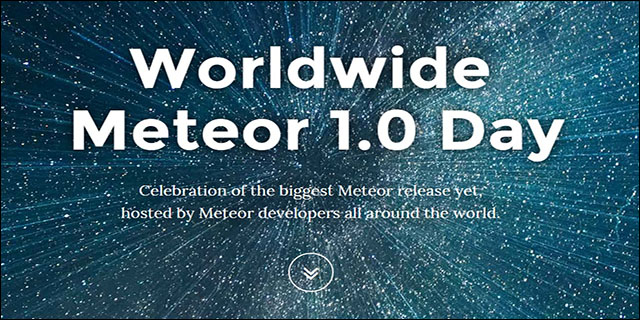 The entire international Meteor community is hosting simultaneous meetups on Thursday, November 6. Worldwide Meteor Day is not a gathering of like-minded stargazers. This event will be hosted by software developers in 127 cities across the globe who are interested in Meteor, an open-source platform for building modern web and mobile apps in pure JavaScript. The platform is rapidly gaining momentum for good reason.

In 2011, Meteor Development went through Y Combinator and followed that up with an $11.2 million investment from Alexis Ohanian and Andreessen Horowitz. At the time, the release of a larger scale platform called Galaxy was on the distant horizon. Excited Meteorites anticipate that a major announcement regarding Galaxy may be in store at the worldwide, simultaneous meetup Thursday night.

Why have over 3,500 programming enthusiasts joined Meteor meetups? According to Meteor's website,

“Writing software is too hard and it takes too long. It's time for a new way to write software — especially application software, the user-facing software we use every day to talk to people and keep track of things. This new way should be radically simple. It should make it possible to build a prototype in a day or two, and a real production app in a few weeks. It should make everyday things easy, even when those everyday things involve hundreds of servers, millions of users, and integration with dozens of other systems. It should be built on collaboration, specialization, and division of labor, and it should be accessible to the maximum number of people.

Today, there's a chance to create this new way — to build a new platform for cloud applications that will become as ubiquitous as previous platforms such as Unix, HTTP, and the relational database.”

Meteor Meetup Groups can be found in 170 cities, but those who still can't get to an event can attend Worldwide Meteor Day online. Most events are following a format that includes a mixer, a Deploy Fest where the group will build an example app (there is already a Github repository), a live Q&A that will be streamed from Meteor headquarters, followed by demos from the developers and entrepreneurs at each local meetup who have built products using the platform. Promotional materials for the event encourage interested attendees that:

“If you’re already a Meteor developer, Meteor Day is a time to meet other Meteorites, demo what you’ve built, introduce a friend into the community, and just plain celebrate! Meteor Day is a great chance to share what you’ve built with your local community. We welcome projects large and small, whether that’s a complex production app built by your multi-person company, or a hobby app that you threw together in a weekend.”

Find your city on the Meteor Day site – some great examples include the events happening in Las Vegas, Chicago, Minneapolis, New York City, and Washington DC!