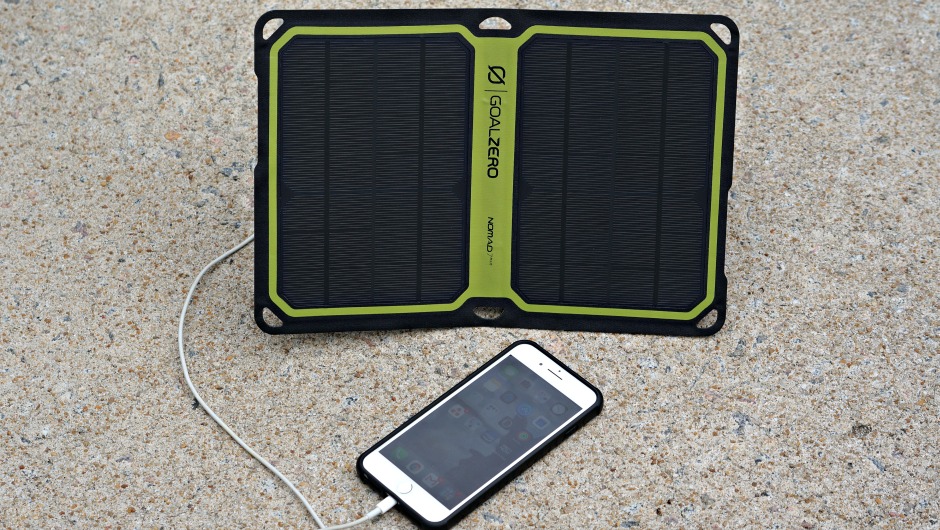 While a certain somebody in a big white house may not feel that renewable energy is important, try making the same argument for hikers and campers. Unless I’m mistaken, you won’t be finding too many trees with outlets on them out in the middle of a national park, which means for the devices that you do need, you only have a few options to work through. While battery packs are great, on their own they are only good for the charge they hold, but throw in a portable solar panel, and you’re back in business. In many cases these panels are bulky, clunky, or just generally ineffective. Goal Zero on the other hand has solar panels galore, so we took their latest Nomad 7 Plus panel and put it through the ringer.

The Nomad 7 Plus is a slim, modular solar panel designed to be both user-friendly and powerful enough to keep things like your headlamps, portable speakers, GoPro, and even smartphone charged while away from a primary power source. As a modular system, it also doesn’t include a power storage device, but anything with a USB cord can use it.

Over the course of a month and a half we put the Nomad 7 Plus through the ringer on sunny and cloudy days, through a few tree-covered nature trails, and on the occasional cycling trip. 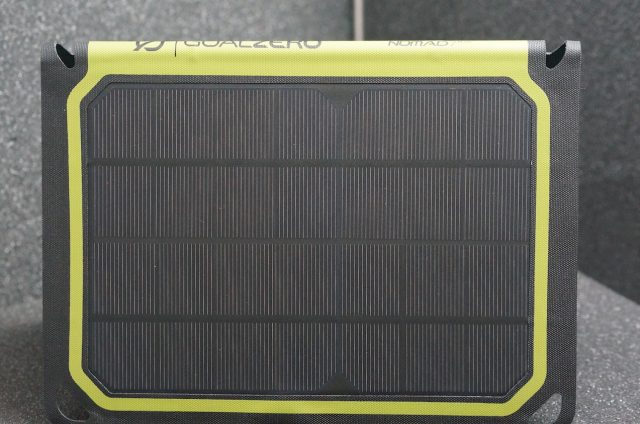 Plain and simple, Goal Zero’s Nomad 7 Plus is designed to keep your devices charged while on the go, as long as you have access to direct sunlight. Using monocrystalline cells, the Nomad should be able to charge most small electronics that use a USB cord to power it, a backup battery, or even your smartphone. It does top out at about the smartphone wattage though, so tablets or anything more power hungry likely won’t benefit.

The Nomad 7 has a rating of up to seven watts of energy output, and thanks to the solar intensity reader you can get a good feel for how much power it’s collecting. With one light you’ll get about two watts, with four you’ll get between five and seven watts.

Hiking and Camping Gadgets to Enhance Your Outdoor Experience

So, how did it turn out? We put it through several tests, but here are the three primary ones.

While strapped to my knockoff camelback using the two included carabiners, I traveled down a wooded, paved trail in Charleston. For the panels to be most effective they need direct sunlight, and positioning of the panels affect this as well. Being on the go, often having trees looming over and producing shadows, this caused some issues as far as effectiveness. At first I tried having it plugged directly into an iPhone 7 Plus, but due to the intermittent powering, it wasn’t a great solution. However, I switched over to a backup battery, which could then be used to power the phone, and after about 40 minutes it bumped the pack from 25 percent to 30 percent. The results are to be expected, especially since Goal Zero suggests the best charging scenario for the Nomad 7 Plus is when the solar intensity reader shows three or four lights, which wasn’t going to happen in this situation.

Just because there are clouds in the sky it doesn’t mean that the solar waves are not passing through. Just as you can still get sun burnt, the waves can still hit the solar cells and allow your devices to collect that energy. However, it just like the wooded trail, it wasn’t as effective, which again is to be expected. While conducting a 15 minute charge time, the iPhone 7 Plus only went up about one percent, but the solar intensity reader only showed one or two lights. However, when plugging in a pair of bluetooth earbuds, a device with a much smaller battery, the battery life went from 90 percent to 100 percent. To me, this was a bit of a surprise, especially since I was still on the go. From this I was seeing some solid potential for smaller devices, especially for things like USB powered flashlights or radios.

Finally we used the Nomad 7 Plus in direct sunlight using the kickstand, and had it simply sitting out for a few hours. From this test, after ensuring the panels were in the best position possible, I saw significant power gains for the iPhone 7 Plus. Again, this is a power hungry phone with a large battery. With occasional spot checking the solar intensity reader would still bounce between one and three lights, and this was in an area with no tree coverage. Occasionally it would bounce to four, but that was less common. As expected from this test, being in direct, well positioned sunlight, the Nomad 7 was able to properly charge the iPhone 7 Plus. However, based on the other tests and the more likely scenarios, I’d recommend using a portable battery to charge, and then using that battery to charge the phone. 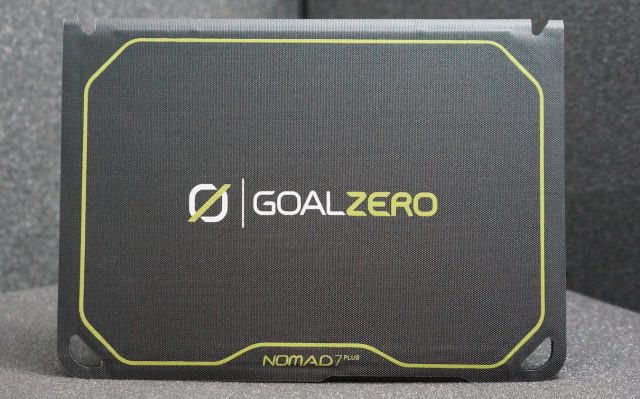 Lightweight, versatile, and durable, the GoalZero Nomad 7 Plus is designed for anything from a leisurely camping trip to a muddy hiking trail, but that doesn't necessarily equate to functioning in every environment. During a wooded hiking trail walk, the Nomad 7 was connected to my iPhone 7 Plus, and regularly disconnected and reconnected. Regardless of effectiveness due to the environment, the panel is designed to be hooked on (with two included carabiners), propped up, or neatly folded away when not in use. It's also only .84 lbs or .54 lbs without the modular kickstand and pouch, so it adds very little weight to your pack. While I didn’t see the need to remove the modular kickstand, it being magnetic makes it incredibly easy to remove. However, while testing this after about a month, two of the magnets became unglued, but that was an easy fix.

Typically these panels are just that, simple panels and you have to guesstimate the best placement under the sun. The Nomad 7 features an LED display, the solar intensity reader, that indicates how strong the solar waves are hitting the panels, which in turn ensure your devices are properly charging. While in a stationary test on a sunny day, it only took a few minutes to figure out the best place to position the panels so that it could properly charge my phone.

The Nomad 7 Plus panels are also weatherproof, but like any electronic device it doesn’t like water. While it will easily kick off water, the junction box where you plug in a USB cord needs to be fully dry before charging a device. With that said, I threw on some dirt and water, and it fell right off without issue.

In all, the design for the panel is simple and clearly built for the outdoor adventurer. After some use and being exposed to some intense Charleston sun, two of the magnets came off from the modular kickstand, but otherwise it works well. The solar intensity reader is also a huge plus if you’re charging in a stationary spot.

Should you buy the Goal Zero Nomad 7 Plus? If you plan on camping and want a safety net for power, absolutely. If you’re going to go hiking, the environment around you will play a big role in how effective it will be. While testing this on wooded trails I found the panel to charge, but pretty inconsistently due to tree cover. This is basically stating the obvious, but it’s still worth noting that until you’ve found a sunny spot to rest, you’ll get spotty results. With that said, the panel is quite effective for charging smaller devices and even portable backup batteries, but again this depends on the sun intensity.

Besides being unable to control the environment, we can recommend getting Goal Zero Nomad 7 Plus, but keep in mind this will be more useful for stationary charging or being out in the open. We give the Nomad 7 Plus a 3.5 out of 5 due to its portability, being lightweight, the solar intensity reader, but ultimately not quite meeting charging expectations. Also the magnet detachment was a bit odd, but an easy fix.

Where to buy: Goal Zero, Amazon

Read more reviews on gear and gadgets at TechCo