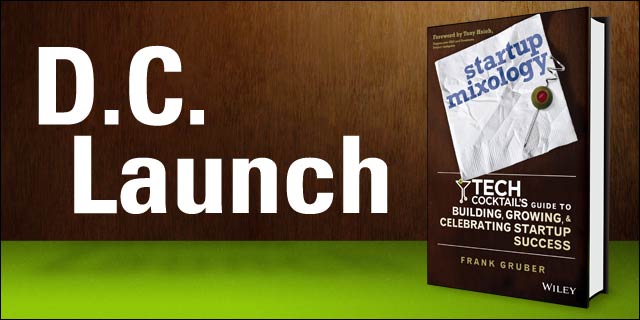 Networking is bullshit. Or, at least, that's what Zvi Band used to think. Band is the cofounder and CEO of Contactually, a startup whose platform helps companies stay connected with and follow up with the right contacts to help them maximize their relationship ROI. Last Tuesday, Band joined Tech Cocktail cofounder and CEO Frank Gruber at a special event at the Crystal Tech Fund to celebrate the launch of Gruber's book Startup Mixology. During a discussion with other local entrepreneurs from the DC region, Band shared his thoughts on networking, and what successful relationship building actually looks like.

When Band was in college, he hated the idea of socializing with people – to the point at which he considered going home on the weekends. The previously introverted software developer, however, really started getting into the habit of meeting people after graduating:

“I started going to, you know, a lot of just straight flat-out networking events,” said Band. “Events where there'd be a bunch of people in the room…for the sole purpose of meeting people. I started making a lot connections back and forth, [and] meeting up with people one-on-one.”

According to Band, though, he wasn't really networking for the sake of networking; rather, he was really just trying to meet new people – to genuinely want to learn more and know more about other people. And through this innate desire to genuine want to connect with people on a personal level, the networking know-how kind of just came about:

“There's a lot of really strong networking advice that I never really followed, but seemed to just do anyway, like delivering value, building genuine relationships, not going specifically for asks, and just, you know, learning generally more and more about people. Things started coming because of that.”

With the increasing amount of networking in which he engaged, Band old the audience that more and more opportunities somehow just made their way to him – that things kept happening at the right time and at the right place, just by having met the right people. Most notably, Band said that when he first started Contactually, all of their initial business was from the connections he'd made in the past. He adds that, at Contactually itself, they've implemented these same kind of connection-building practices, which has opened the company to

“The more people I seemed to know, the more things kept happening because of that – that if I happened to know the right people, at the right time, that would make the right introductions. And, so, we kind of started making more practices [at Contactually] where we wanted to talk to as many people as possible – we wanted as many people knowing about our startup. So, we made the practice of just not blasting and saying ‘Hey, i want everyone to know about Contactually!', but we made the practice of talking to our competitors, talking to investors of our competitors, [and] talking to people who had failed. You know, it's amazing to see what has happened because of that. Because not only have we learned a lot more but amazing things that we never would have expected – like partnerships and investment opportunities, and things like that – happened because we knew the right people. And I think it's just really in part because we just knew the right people by casting such a wide net.”

Networking, however, takes a lot of practice, and a person really needs to get over their initial hesitations or fears in order to actually go out there and begin to connect with people. For Band, he thinks that the number one mistake that people and startups make is this inability to actually go out there and build these connections. He believes that it takes a lot of effort to start engaging in various networking practices, but much like any positive human habit, we can end up benefiting once we've got the routine down:

“Honestly, the number one reason why we see people fail – who fail to network or are unsuccessful – is they don't do it. Honestly, if you're just someone who makes that effort and is consistent – once a week, once a month, once a day, five times a day – you know doing something like that, as simple as sending one email a week or one email a day – that separates you from 99% of people out there…Building a strong relationship is something like brushing your teeth – it's short-term, you're not really gonna gain much [in the short-term], but you have to keep at it, keep going.”