ExpressVPN's cheapest plan costs $8.32 per month when billed annually for a full 12-month plan. Don't want to commit to a year? The other two plans cost $9.99 per month when purchasing six months, and $12.95 per month for a single month.

All three plans offer the same VPN service, along with 24/7 support and unlimited bandwidth.

Your best bet is to be vigilant for ExpressVPN deals and discounts, which can cut down that fairly steep asking price to a more palatable fee.

Read on to find out exactly what you'll get for your money, if ExpressVPN is the best value VPN for you, and whether you should spend less on an alternative service.

Each of ExpressVPN's price plans offer the same service, with the same suite of features. The only difference is how many months you're willing to pay for at a time.

Do you already have a VPN?

While the $12.95 one-month plan is pricey for a VPN, the annual plan brings the cost down to a reasonable (though still at the higher end) per-month cost.

ExpressVPN offers a 30-day money-back guarantee, with no questions asked. Just contact their Support team through live chat or email.

The VPN company does not offer a general free trial period, but the money-back deal is functionally the same. This makes it easy to sample the service at no cost, assuming you eventually decide that it's not for you.

ExpressVPN offers one extra way to save a little money on your plan: Any ExpressVPN users who successfully refer a friend to the service will receive a free 30 days of the service for both themselves and their friend. You can refer as many friends as you want, and get a further 30 days for each one.

It also supports Paypal and Bitcoin, as well as many other alternative payment methods, such as those available through the payment provider Paymentwall.

If you're interested in ExpressVPN's service, you may want to try the $12.95 plan for one month just to test it out. If you like it, you can then switch to the less expensive 12-month plan for the best savings.

Does ExpressVPN Have a Free Version?

No, ExpressVPN does not offer a free trial or a free plan tier. It's a premium VPN, not a freemium one.

At least, it doesn't offer a free trial in most circumstances: ExpressVPN does provide a free trial for “certain mobile devices,” according to its website. You'll need to get in touch with their Support team to learn more.

We have rounded up all the best free VPNs in the past, although they all come with their own drawbacks as well: Most come with heavy bandwidth limitations or speed throttling, almost all offer limited features, and a few even come with dangerous security risks that may leave your information more exposed than if you'd avoided a VPN at all.

Why is ExpressVPN more expensive than other VPNs?

Even at its cheapest, ExpressVPN still costs $8.32 per month, which puts it solidly at the higher end of the scale for VPNs – many of which are available for $3 to $5 per month.

Put simply, ExpressVPN justifies this price by offering a superior service: The company runs and maintains a scaled-up and highly secure network, which is what its customers are paying for.

In the table below, we compare ExpressVPN's pricing and features to some of its main competitors, along with our independent test findings: 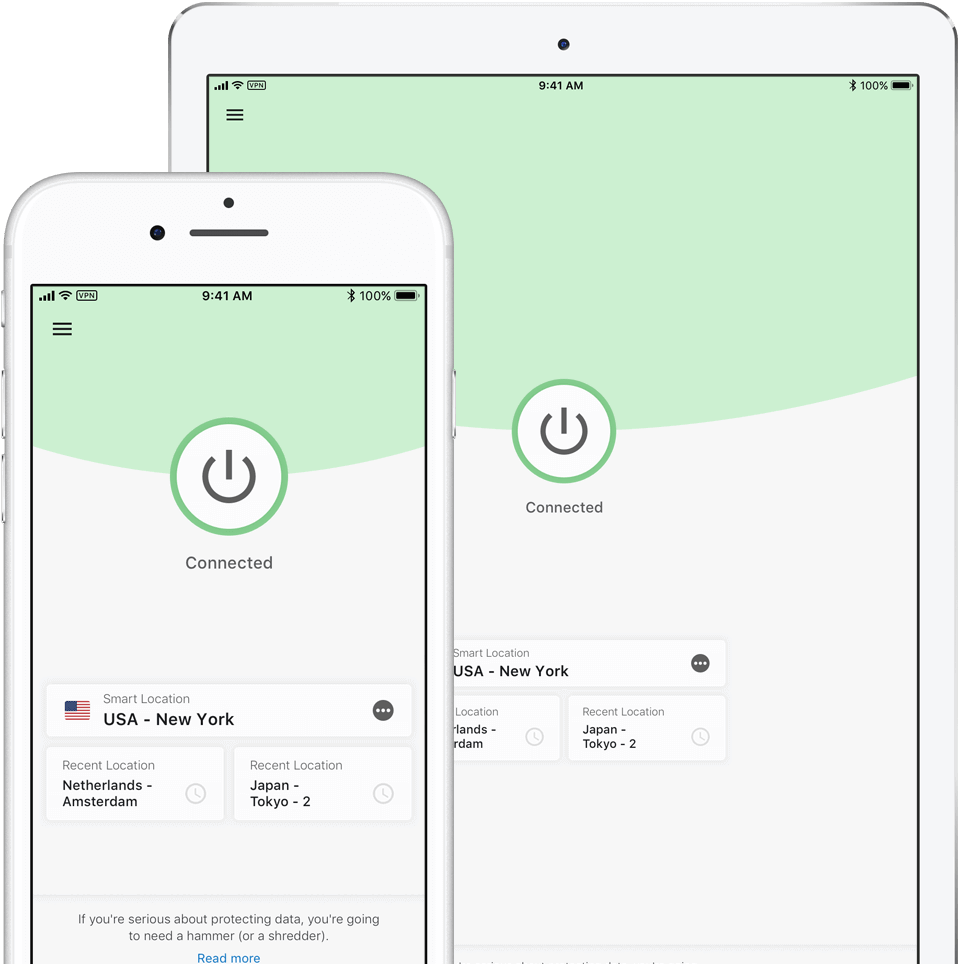 Compared to the competition, $8.32 a month can seem like a lot. But consider what it's protecting you against: Unsecured information could lead to identity fraud, or money lost to phishing attempts. If you're interested in staying safe online, and you need a reliable service, paying the cost of a cup of coffee a month for the privilege makes sense.

Is ExpressVPN better than the cheaper competition? Ultimately, you'll need to decide that for yourself, based off your budget and need for security. We can confirm it's one of the most secure options out there.

Whether ExpressVPN provides strong value for its price depends on what you're looking for.

The good: ExpressVPN offers unbeatable security, one of the most essential elements of a good VPN. It's also feature-rich, giving users the flexibility they need to stay protected. It also supports peer to peer file-sharing, even including tutorials.

The bad: ExpressVPN costs a lot, and it's not one of the faster VPNs out there. Our tests found a speed loss of around two-thirds, though it was also inconsistent, sometimes performing much better.

You can also check out our full ExpressVPN review here.

Here are a few other top VPN services. We've vetted them all, and found that while some have strengths that others don't, they're all relatively secure and worth considering.

While any VPN is going to lower your internet speeds a little bit, NordVPN only does so a little, putting it ahead of ExpressVPN in our tests. It offers a great suite of features as well, rivalling ExpressVPN's options. We've compared the two services in plenty of depth in a separate article, so check this out if you're interested in learning more.

One other big benefit: NordVPN can cost as low as $2.99 per month, provided you nab the best discounts.

Fast, powerful, and great value - no wonder its our top rated VPN
4.1
In Short

PureVPN is one of our top rated VPNs, thanks to an impressive collection of features and a simple approach. The interface is easy to use, the features offer plenty of options for connecting third-party apps, and the package comes with some extra security functions that other VPNs don't have. These security bonuses include Ozone, an antivirus that blocks internet security risks before you notice them, and Gravity, an ad blocker.

Best of all, it's a cheap service: go for the discounted two-year plan through this link, and you'll pay just $2.88 per month.

If you know your way around a VPN, you'll likely want one with detailed, granular features and settings. A power user will benefit from gaining the ability to customize their VPN protocol, or to pick the best type of leak protection. On the flip side, if you're not an expert, you might get bogged down in the details.

IPVanish delivers those features, along with a speedy connection and global server coverage. Prices aren't the lowest, though, at around $10 per month when paid monthly.

TorGuard is a great option for users interested in peer-to-peer file sharing while retaining privacy. While we at Tech.co don't condone any illegal activity, such as sharing copyrighted materials, there's nothing wrong with the act of file-sharing itself. TorGuard keeps you safe during the process, thanks to high-quality leak protection functionality and consistently high speeds for a VPN.

On top of all that, it can also unlock Netflix – something that only a handful of VPNs can boast.

Paid annually, TorGuard is about $5 a month, making it a fairly cheap service. One downside: It can be intimidating to casual users.

CyberGhost aims its service at VPN beginners, prioritizing ease of use. It'll automatically block ads, trackers, and malicious websites. Plus, users can just pick one out of a series of “modes” when signing on – Surf Anonymously, Torrent Anonymously, or Unblock Streaming are a few examples. This gives them an easy way to get the best server for their needs, even if they don't have any technical knowledge.

The trade off is that it's a pretty slow VPN, sometimes slowing connection speeds by over 60%. Sign up for two years at a time, and it'll cost you just $3.50 per month.

User-friendly, but some speed loss
3.5
In Short

Here are a few commonly asked questions, accompanied by our concise answers and links to additional articles that tackle the questions in depth.

Why is ExpressVPN so expensive?

ExpressVPN positions itself as a premium VPN service: It costs a lot because it's worth the price. Our tests have confirmed that it is indeed a high-quality VPN when it comes to security, features, and support.

It offers a great mobile app as well. However, it's not as fast as some VPNs.

Yes, ExpressVPN is trustworthy. It has a no-data-logging policy, so your data won't be saved anywhere, and it comes with useful features, including a killswitch and a split tunneling option. ExpressVPN is a top-tier VPN for keeping your information private and secure.

How fast is ExpressVPN?

ExpressVPN is not a fast VPN service. Any VPN will drop your connection speed, but our tests showed ExpressVPN's service resulted in a typical loss of about two-thirds, regardless of whether the connection was with a local or an international VPN server.

If you value speed, you should consider a different VPN —  NordVPN is a much faster option, for example.

Is NordVPN better than ExpressVPN?

NordVPN offers a faster and cheaper VPN service than ExpressVPN. However, ExpressVPN is a reliable, highly secure VPN.

Overall, NordVPN may have the edge – largely due to the price difference. We've compared the two services in more depth in another article.

How much does a VPN cost per month?

VPN costs can vary depending how far into the future you're willing to pay. If you're just paying your bill on a month-to-month basis, typical costs range from $8 to $12 per month. If you pay for one, two, or three years at once, the per-month cost range will be closer to between $2.50 and $5 per month.

ExpressVPN is legal to buy and use in many countries, including the United States. There's nothing illegal about using a VPN service to protect your data when using the internet under US law, as long as you aren't attempting to conduct any other illegal activity while online.

Some countries, including China and Russia, restrict the use of VPNs within their borders. In addition, some companies ban VPN use in their terms of service even when it isn't strictly illegal. For a deep dive into these cases and more, read our article discussing the legal complexities of VPN use. 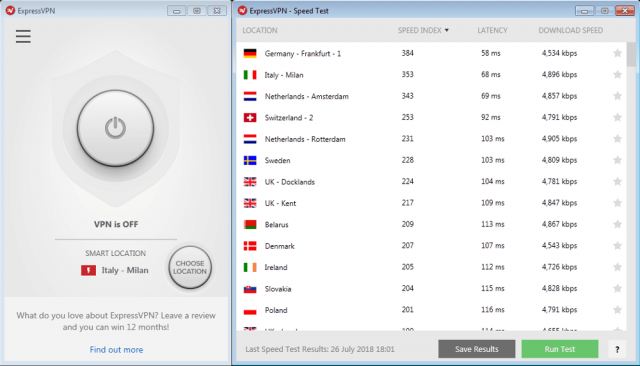