Despite there only being three model lines in the MacBook range – each with their own sub-variants – picking the right model for your needs isn't always obvious. Do you go for power? Portability? Or both?

With these options in mind, which MacBook should you get? Here's the easy answer to help you decide:

The Apple MacBook range has long since established itself as the perfect mix of style and power. With MacBook prices starting at $999, Apple's laptops aren't the cheapest, but they're an investment that can last you for many happy years. But which MacBook is best for you?

We look at the Apple MacBook lineup, and help you pick out the best Mac for your own needs and budget.

Which MacBook is the Best for You?

The two series in the MacBook range available today are the MacBook Air, and MacBook Pro. Each has its own strengths, but rest assured that all models deliver the goods.

If you're stuck between the office and home during the pandemic, a MacBook is a great choice, as it doesn't scrimp on power, and battery life is outstanding, meaning you can work from pretty much anywhere, for long periods away from the power outlet.

Apple has built a solid reputation for its excellent hardware, and there's a reason why its customers are so evangelical about the brand. Any one of the laptops above would do you proud for day-to-day computing. If you need to step up to harder-going graphics tasks, think Pro. For value – not something normally associated with Apple – go for the MacBook Air.

Also in this guide:

The best MacBook for day-to-day casual users, and beautifully portable

The MacBook Air went unloved for a few years by Apple, surpassed by the Pro range, and the MacBook. However, it was given a fresh lease on life in 2018 with an update, and Apple have continued to refresh it ever since.

Arguably its biggest update came in November 2020, when the Air range was given an update that included Apple's new M1 Chip, having decided to move away from Intel processors and produce its own dedicated CPU in-house.

The Apple M1 Chip has given the Air a serious power boost. In terms of raw power, it's over three times faster than the previous model, and the GPU has an impressive five times faster graphics capability. And the best part? The MacBook Air remains the most affordable MacBook. Yes, there are cheaper models out there, but realistically, you'll struggle to find anything juggles power/value like the MacBook range. They're also incredibly well built, so it will last you years.

There's lots of other reasons to sing its praises too. Battery life can last up to 18 hours. No, that's not a typo – Apple claim this on its site. Now, you might not get quite that much juice out of a charge (this estimates tend to be fairly generous), but you'll get close, meaning you can spend the whole working day and beyond on the Air without fear of it dying on you mid-sentence.

Verdict – The MacBook Air is a serious threat, not only to competitors, but also, to The MacBook Pro series. The M1 Chip means  that the Air packs a real powerful punch, and with it prices $300 dollars cheaper than the entry-level Pro, it's a fantastic choice. 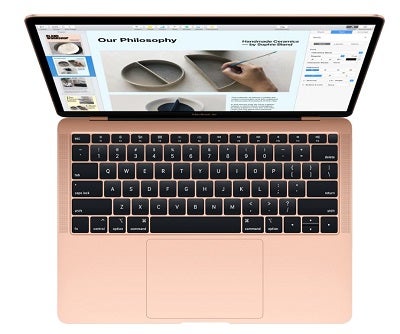 A solid MacBook with a Magic Keyboard

Granted, the specs are relatively modest, with just an Intel Core i5 processor under the hood, rather than an i7. But most people won't find it lacking for power. For those who do? The entry-level model is configurable to an 8th‑gen Intel Core i7, and the top-end one goes as high as a 10th‑gen i7.

One big update with this model: The much-hated Butterfly Keyboard is gone, replaced with a backlit Magic Keyboard. Plus, a Touch Bar is included in all 13-inch models. Apple's attempt to reinvent the way we control our laptops isn't the game-changer that the humble mouse was, but it's a nice addition.

The Touch Bar's function depends on what you're doing on the MacBook at the time, and varies from scrolling through pages, scrubbing through video and images to presenting context-dependent buttons. It's versatile, but its main use case is for image and video editing, so could be handy for a designer.

Verdict – This 13-inch model has the slight edge over the standard 16-inch model, but its key selling point really is the Touch Bar – and little else.

The 2021 16-inch MacBook Pro is Apple's flagship laptop, with specs and price that reflect its status. That's right – it's not cheap. The entry level model comes in at $2,499, and goes up to a jaw-dropping $3,499 for the top-end version.

For the money, you get a lot of laptop. Even at entry level, that means a powerful M1 Pro processor – this turns into the M1 Max chip with the pricier version, for some serious firepower.

The entry-level version also comes with 512GB SSD (just like the previous model), and it's configurable to anything from 1TB to 8TB. The previous model's retinal LED‑backlit display has been replaced in 2021 with the Liquid Retina XDR display, with 3456-by-2234 native resolution at 254 pixels per inch, with 1000 nits sustained brightness and support for one billion different colors.

You'll also get the same Magic Keyboard offered by the 13-inch Pro. Combined with the 16-inch's stellar specs, that means this laptop is big, beautiful, and gets crazy expensive with top configurations. It's a great investment for design professionals who aim to make their living through it.

Verdict – The best MacBook Apple has to offer, and incredibly powerful. But it's pricey. 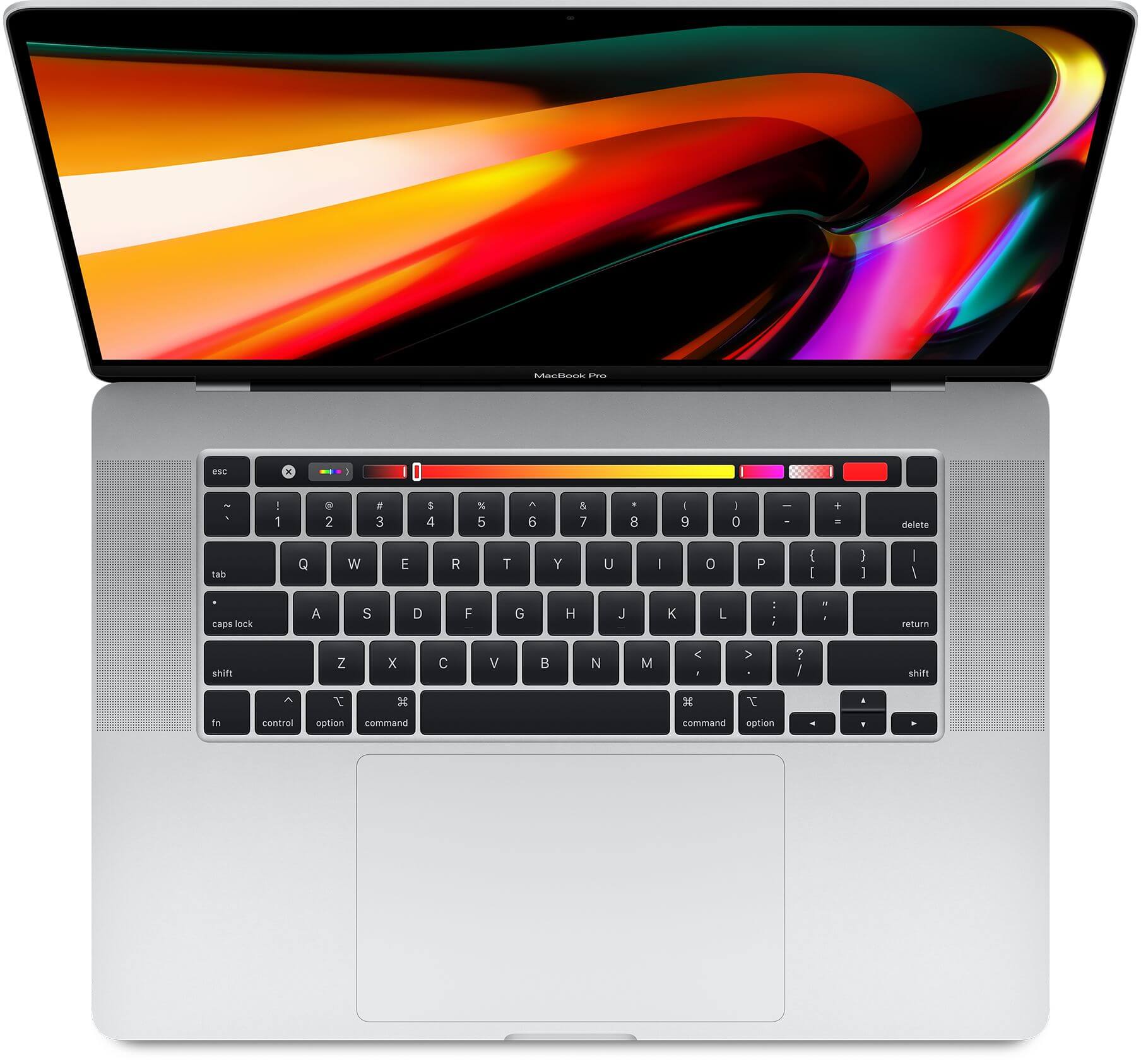 With the discontinuation of the MacBook, picking up an Apple laptop has never really been easier. You're basically left with the choice of either the Air or the Pro – but which should you opt for?

The gap between the two MacBook models is closing all the time, and the introduction of that M1 Chip has muddied the waters even more. It used to be the case that if you wanted power, you went Pro, but the Air's new upgrade means that it has plenty of processing capability. In fact, the entry-level Air and Pro both use exactly the same processor. The MacBook Air is an ideal everyday machine that won't slouch.

However, if you're someone that is running demanding apps, and wants a smaller-form, 13-inch screen, then the Pro 13″ has the slight edge here as it features a fan in the chassis to keep the MacBook cooler for longer. This means that it can run power hungry software for longer without slowing down to reduce heat. It also had the added benefit of Apple's TouchPad and Touch Bar. So, if you want a little more power without breaking the bank, go for the MacBook Pro 13″.

Where does that leave the MacBook 16″? Well, this thing isn't cheap. It starts at $2499, making it twice as expensive at the Air. However, what you get for your money is a powerful Mi Pro processor, 16.2-inch screen with 3456-by-2234 resolution, and three Thunderbolt 4 ports (compared to the Air and standard Pro 13-inch's two Thunderbolt 3 ports). There's a few caveats – it's heavier, obviously, and the high price is worth mentioning twice, but it is an excellent choice for graphic designers and those who don't want to compromise.

The MacBook Pro range starts with a decent-spec laptop that will suit most users, moving up to a power-packed head turner for those with a seriously generous budget. Realistically, you don't need to plump for the top-end model unless you're really looking to do some serious graphics work.

The Touch Bar is a feature on all 13-inch Pros, though not the 2021 16-inch Pro. It's essentially a slim touchscreen that is “context sensitive”, and can be used for scrolling through photos or scrubbing through a video. Is it essential? No. Is it cool? Depends who you ask.

All models also enable Touch ID as a way to log into sites or pay for items. Again, its a nicety, not a necessity.

Most users will get away with the entry-level 13-inch MacBook Pro, especially now it's been granted that M1 Chip upgrade. It may not have the processing power of the pricier models, but they won't miss that if they're simply surfing, streaming, and working.

Opt for a 16-inch model, and you'll get a beautiful 3456-by-2234 Retina screen. Both are perfect for designers, but with storage purely solid state drive (SSD) based, you might want to look into a decent external hard drive for all those large image files.

Verdict: There's no ‘bad' MacBook Pro to choose, but only opt for the 16-inch models if the kind of work you do means you can really justify the expense. Otherwise, it's power you may not need.

close Building a Website? Get 50% off Wix premium plans until June 30 Claim 50% Off