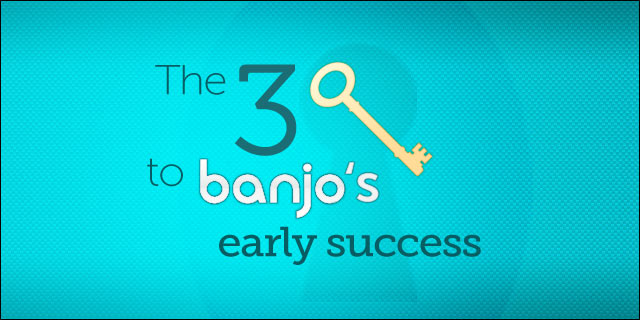 The last time we featured Banjo and their founder and CEO Damien Patton, social discovery was the next big thing.  Earlier this week, the Redwood City-based startup passed the one million user mark – in nine months.   Social discovery is mainstream, and it looks as if Banjo is leading the charge.

Among a highly competitive field (including Highlight, Sonar, and Glancee), Banjo is the first of its class to cross the one million mark – only the recently acquired Instagram has reached this benchmark faster (2.5 months vs. 9 months).  I caught up with Patton to learn more about the secrets behind Banjo's rapid growth.

First and foremost, Patton credits those who surround him for Banjo's success.  “We are like a professional racing team that executes with precision and speed.”  With a background as a NASCAR crewman, Patton has carried over this high-paced, detail oriented work ethic to his new crew.  After Instagram opened up to Android, it took only 18 hours for Banjo to incorporate the new accounts into their own app.

“This is one of the biggest issues any new app has, but especially in social,”  Patton continued. “Getting people to spend more time on Banjo was key to learning what they really wanted.”   Banjo offers a map overlay of nearby social activity, whether within or outside of your normal network.  As it turns out, browsing nearby strangers' social media accounts is an addictive behavior.

“Incorporating multiple social networks was really important in the beginning to gain traction with Banjo members and their friends,” says Patton.  By allowing users to pull in contacts from Facebook, Twitter, Foursquare, Instagram, and Path, Banjo has stood apart from the crowd by tapping into the largest breadth of networks.  Also, Banjo is available for both iOS and Android, whereas Highlight currently only offers an iOS app.

Do you use Banjo?  If so, what features are stand out as your favorite(s)?  If not, which social discovery app do you prefer and why?