In the startup world, sometimes it can feel like the coasts get everything. Whether it's the media attention, the business resources, or the innovative minds, New York and San Francisco are the tech hubs that make everyone else feel small. However, according to a recent study, when it comes to startup tech funding, neither of them are number one.

That's right, thanks to some data from Fundz, this Windy City native is happy to report that Chicago has more startup tech funding than any other city. Naturally, New York and San Francisco round out the top three with Boston holding it's own with just under $3 billion. The list substantially drops off after that, with Irvine, CA taking the fifth spot at less than $1 billion in startup funding. 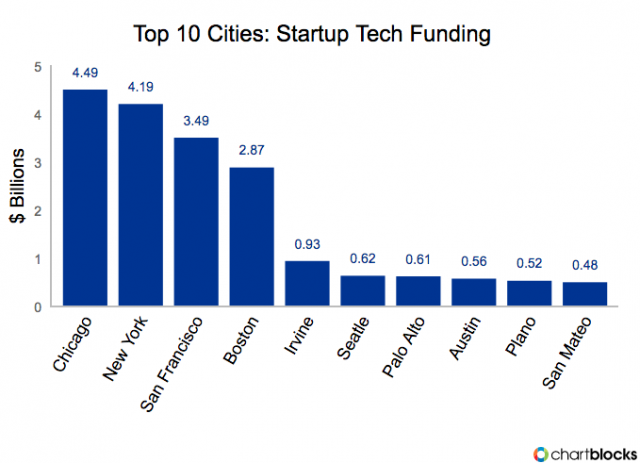 This was one of the largest collection of data on startup funding to date. By analyzing data from the SEC in regards to 17,459 startup fundings across the US, they were able to get a clear cut picture of who was thriving and who was struggling in the startup game. And this level of analysis has rarely been undertaken by anyone.

“This is the first time that a project of this kind and this scale has been undertaken,” wrote the authors of the study. “The end result is access to up-to-date data and expert analysis that highlights emerging trends that point the way to the future of startups, business and the economy as whole.”

If you're surprised by Chicago's place at the top, you've clearly never visited the city by Lake Michigan. Not only is the startup ecosystem thriving on success stories like GrubHub and Groupon, the founders, entrepreneurs, and influencers found in the Second City are supportive of each other in a way that makes the city's first place in startup funding barely surprising. The weather is still pretty rough though.

Update: It was discovered at a later time that the findings in the study in regards to Chicago's startup funding numbers were incorrect. TechCo reached out to Fundz to find out why:

“After running a report, we found that there was a one-time $3.6 billion dollar transaction which greatly skewed the results for only Chicago,” said John Dukes, founder of Fundz. “Specifically, AbbVie acquired Stemcentrx, but as part of the deal, acquired $3.6 billion and made a filing as such. Hence, even though it was filed on a Form D, (which is usually companies raising money from investors or financial issuers raising money) in this case it was a necessary transaction as part of a large merger and thus it would be inaccurate to called it startup tech funding.”

Find the updated startup funding numbers below. Chicago still made it into the top five, but still. 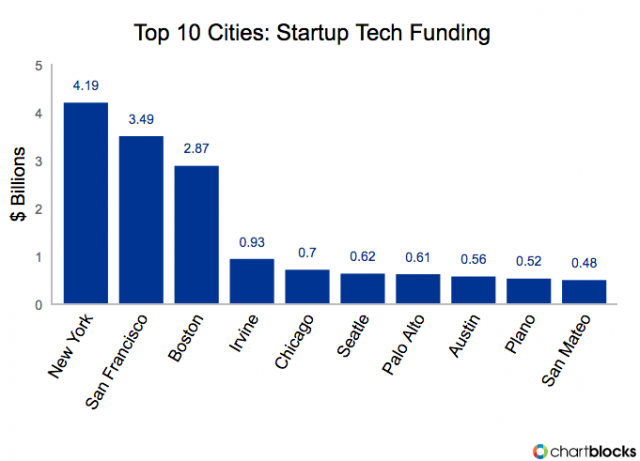