While most of the mobile apps you know and love are free, the business world is all about making money. Sure, some entrepreneurs are all about saving the world, but if you can't secure your bottom line, the only thing you're going to be saving is the change in your couch. Fortunately, most of these free apps have a revenue stream that can support their company in one way or another. And some of those companies don't know what to do with all that cash.

According to data from Sensor Tower, we now know which apps are the most lucrative when it comes to the non-game section. Through in-app purchases and subscription requests, these apps are rolling in enough dough to make the top of the list. And if you're surprised by the number one spot, you haven't cut the cord just yet. 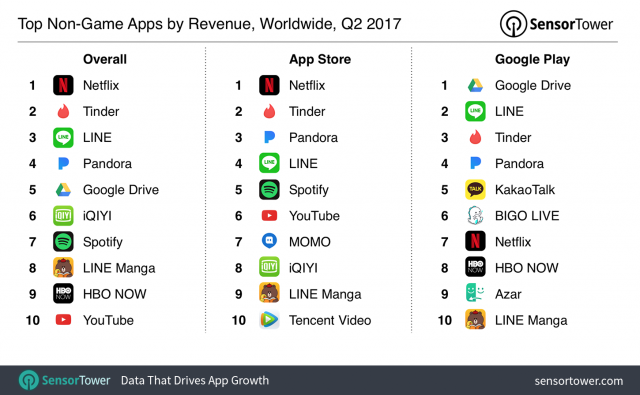 That's right, everyone's favorite binge-watching medium, Netflix, has locked down the most lucrative non-game app in the world across App Store and Google Play. Despite it falling to 7th in Google Play (with Google Drive taking the top spot), it's remarkably high numbers in the App Store kept it secured in that top spot, increasing it's revenue 233 percent from last year. Yes, you read that correctly: Netflix increased its revenue from in Q2 from $46 million to $153 million. This just goes to show how big the mobile revolution has gotten, even for streaming services.

“Netflix previously reported year-over-year Q2 2017 streaming revenue growth of about 36 percent, a figure that represents overall revenue from set-top boxes, personal computers, and mobile platforms,” wrote the authors of the report. “Considering this, its growth in mobile revenue is proving considerably more pronounced than that generated by non-mobile platforms.”

Unlike the most downloaded apps list, also provided by Sensor Tower, the list hardly changes when looking exclusively at the US. While Pandora was able to lock up the second place spot across the board (apparently Americans really hate those stupid ads in between songs), Netflix remained at the top globally and in the App Store, while again Google Drive dominated Google Play. 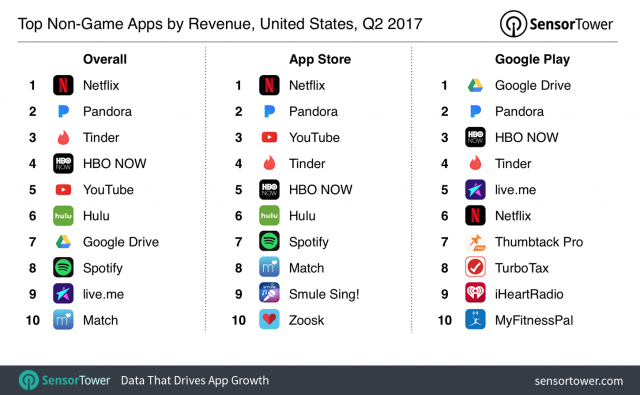 For more information on the state of mobile apps in the US and around the world in Q2, make sure to check out the full report here and keep track of where you're making in-app purchases.