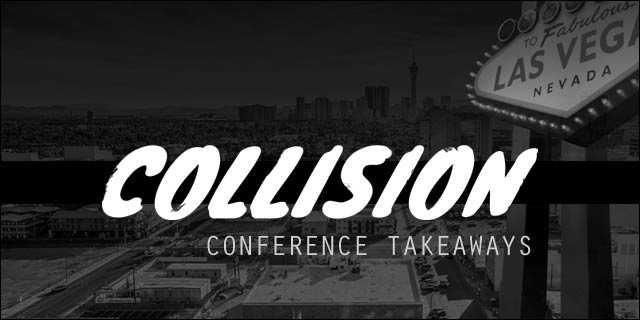 Collision Conference took place in downtown Las Vegas this week, hosting some of the biggest names in technology. For two days (May 13 & 14), 1,500 attendees had the opportunity to mingle with industry leaders and members of the media, as well as see the hottest startups in the world. Organized by Europe's The Summit, this was the company's first event in the United States, which came with a personal invitation from Zappo's CEO Tony Hsieh.

“We create events where people can collide; after that, they create their own paths,” says Paddy Cosgrave, CEO of The Summit.

Over 50 speakers took the stage and shared some valuable advice. Here are some takeaways:

1.“The best way to hire people is understanding their long-term vision.” – Keith Rabois of Khosla Ventures.

Rabois spoke about hiring and firing, which can be difficult for startups when competing with more established companies like Google. He added that when it comes to hiring, motivation is key when looking for the perfect candidate. When it comes to letting a bad fit go, he advised to “move fast, but it’s our human nature — it's hard to fire someone. If you ask yourself, should I fire this person? That is already an indicator.”

2. “Any good tech company needs to have the technology that solves a simple problem.” — Aaron Patzer of Mint.com

Patzer had a successful exit with Mint.com, but even he admits that it wasn't easy running a startup. He added that when it came time to negotiate the acquisition by Intuit Inc., he learned some lessons: “Valuation is kind of a bullshit art.” Patzer warned entrepreneurs about saying anything wrong during negotiation talks: “It's the difference of $10 million.”

3. “If we are not careful, we [Venture Capitalist] will become predictable. This means great companies will not be built.” — Chamath Palihapitiya of Social+Capital Partnership

Known for thought-provoking statements about the tech industry, Palihapitiya did not let the audience down this time around. He warned entrepreneurs about investors who are becoming too predictable by creating and investing in startups that tick certain boxes. He added, “I am trying to be flexible because we want to make sure we invest in the right companies,” and that his goal is to “keep the lights on and get accidentally lucky with one of these companies.”

4. “We will start to see signs of bigger tech companies in the marijuana market. It will evolve similar to the local wine and craft beer industry.” — Justin Hartfield of Weedmaps

Oh yes, there was talk of weed during the conference.  The “green rush” will include technology companies targeting growers and consumers alike. It goes from vaporizers for consumers, to LED lights for growers.

5. “If you did it first, you name it.” — Tony Hawk of Tony Hawk Foundation

The sports legend and surprise speaker took the stage and talked about becoming an entrepreneur, explaining that, “If I wanted to keep doing what I loved, I needed to start a company.” He went on to talk about some of the mistakes made along the way: “You have to think of something in your way as a lesson, not an obstacle,” said Hawk.

6. “Create a sense of urgency. People who achieve a lot set deadlines and goals.” — Mark Suster of Upfront Ventures

When it comes to building and funding a startup, Suster says it's all about confidence. “Lack of confidence kills startup performance,” he said. He advised the entrepreneurs in the room to commit to a 45-minute coffee meeting a week to build 50 meaningful relationships in a year.

7. “Insert yourself in the conversation that is already happening. Be refreshing when doing so.” — Michael Dubin of Dollar Shave Club

Dubin spoke of the importance of treating your customers right. That means following through with promises made because it will create trust. “Then you have loyal customers,” says Dubin.

8. “First they laugh at you, then they ignore you, and then you win.” — Matt Mullenweg of WordPress

Mullenweg spoke of some of the pushback when first launching WordPress. But he persevered, and good thing he did. WordPress powers one in every six websites on the Internet. With the goal to “democratize development,” Mullenweg told entrepreneurs about why he built his platform: “I always wanted the majority of the web to be on an open source platform, so I built one,” he said.

9. “If someone tells you that you're crazy, you're either crazy or onto something.” — Scott Belsky of Behance

In this case, Belsky was onto something. Behance was acquired by Adobe Systems for $150 million in 2013.

10. “A great brand is a story that never stops unfolding.” — Tony Hsieh of Zappos

Hsieh closed the conference talking about Zappo's culture and Downtown Project. He talked about “Return on Collision” and how it affects the community. Hsieh explained, “If we can do it here [Las Vegas], maybe we can inspire other cities in the world.”