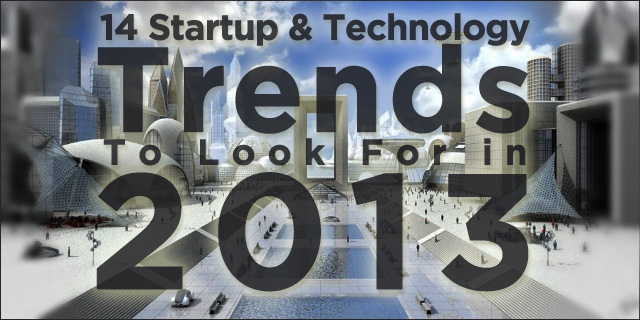 For many, the end of the year marks a time for reflection, both in their personal and professional lives.  We ask ourselves, “What worked in 2012, what didn't, and most importantly how can I do better in 2013?”

To help your startup get a leg up in the new year, we've collected 14 trends to look for in 2013 from entrepreneurs across several diverse industries.

There's an open source movement of sorts occurring in the physical world. With a mix of consumer 3D printers, really cheap hardware (sensors,  motors, processing boards), and a feverish online community, we're going to  see some great projects that will challenge the established players. Tools that were once only available to larger companies with bigger budgets can now be purchased by the consumer, essentially allowing anyone to create anything. This is going to spawn innovation on a major scale.

In 2013, we'll see the SoLoMo trend play out in a variety of ways. We'll see businesses realize the value of connecting with consumers when it's most relevant, while a consumer is inside an establishment, and when engagement can produce the greatest ROI for businesses. The payment space also continues to evolve rapidly with new players emerging who can disrupt how we procure products and services on our mobile devices.

I'm excited to see what socially conscious entrepreneurs develop in 2013, feeding off the momentum of the presidential reelection. Active activists will hone in new initiatives and engage in online to offline organizing to champion their cause of choice. TheAction.org already continues the conversation on a grassroots level and encourages direct discourse with Washington politic. I'm certain many digital campaign tactics from November will be employed to launch emerging “good” tech and services in the new year.

The most groundbreaking business trend of the coming year has been the landslide shift towards mobile, especially through responsive web design.  The sheer number of mobile devices in the world (over one billion iOS and Android devices) makes the case for the importance of mobile-friendly web design. In September, desktop web searches declined for the first time. Businesses that embrace websites which meet the demands of the next generation of computing are more accessible to their customers.

Thanks to the deluge of data entering organizations today, accountability is more data-driven than ever. Because of this trend, 2013 will be the year of informed accountability and thanks to online tools, you can now define what your level of accountability is.

6) Maturation of the SmartTV

2013 will be the year when Smart TV grows up. The first generations in 2009 and 2010 were essentially simple widget engines that allowed for basic internet apps being moved to the TV. The 2011-2012 generations were more powerful, but were lacking in key video technologies and DRM technologies. In 2013, Smart TVs will be powerful internet-centric OTT devices with full capabilities of providing a top tier UX for a pay-TV service.

We will see an increasing amount of pay-TV providers and media companies moving into Smart TV, either in exclusive partnerships with device manufacturers for certain markets or as a complement to their traditional service. The competition for consumer attention in the living room will further increase.

There's a massive shift in egifting going on. This $100b industry has only 39% of egifting, the rest comprises of physical gift cards. With mobile transactions now mainstream, we predict the 39% will jump up by 10-15% – a combination of mobile & web.

Direct marketing will take on a whole new meaning as sellers embrace mobile technologies to influence customers. New Nelisen research shows that the most popular form of search on mobile devices is to find a restaurant.  Now, at least 55% of Americans have smart phones. The US restaurant industry is $652 billion. The most important driver of a restaurant's business is word of mouth from  loyal customers.  So we know that 55% of customers are in restaurants with a mobile device.

That mobile device becomes a secret weapon of engagement for the operator to engage new and repeat customers, encourage their referrals and reviews on social media and to reward their good behavior.

2012 was dubbed The Year of the MOOC (massive open online course) by the NYTimes, and in 2013 expect that title to go to Open Educational Resources (OER). OER is made up of openly-licensed and free material meant for re-use and re-purposing in learning, teaching, and researching. As the cost of college continues to rise in 2013, we'll see students continuing to cut costs and save money on things like textbooks and study materials, which can be created entirely from OER.

We’ll see an even closer melding of e-commerce, content, and marketing. The marketing and sales funnel will become even more of an integral “one stop shop” customer experience. A sales model in which the consumer reads about a new set of golf clubs, sees a testimonial from a pro, receives an offer, and makes the purchase all on the same screen will become the norm. Companies will own far more than just the click—they will begin to merge interactions, content consumption, transactions, loyalty, and customer relationship management together in ways that will win sales and be convenient and relevant for consumers at the same time.

– Prashant Nedungadi, the founder and CEO of NimbleCommerce

True mobile broadband and cloud services will change consumer's expectations for information and media consumption everywhere. Seamless integration among screen and devices will be a key driver for companies!

In 2013, we will see the invasion of social into enterprise communications. More and more people work from home or other remote locations so the socialization of people becomes important. Devices with built-in wide-angle cameras with 180-degree views will allow us to have multiple conversations with people sitting in the same location. The user interfaces are not defined yet but they are coming.

With the recent changes in the funding environment in the Valley – a shift to the enterprise and fewer consumer Internet deals getting done at the Series A level – I think you're going to see more and more startups in the consumer space focusing on monetization and sustainable business models.

Lifehacks will go mainstream. We will see many apps that help people accomplish their goals in both their private and business lives. In particular, there will be breakthrough solutions to make it easy to organize your life in a intuitive and comfortable way.